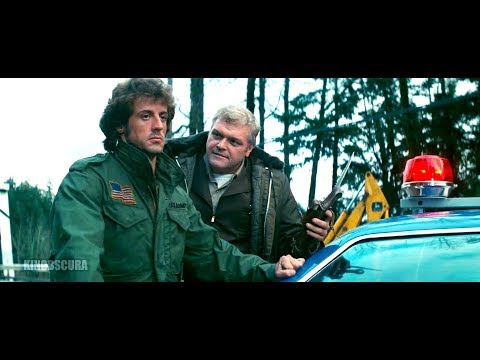 First Blood and the Age of Black Lives Matter

Recently, the Sylvester Stallone movie First Blood has been playing a lot on cable.  I hadn't watched it in decades and I have to admit I had forgotten what a morally ambiguous film it is, as well as just being a flat out good movie.  I suspect what happened is that it got overshadowed by the following two sequels with their gung ho patriotic themes and John Rambo being an unabashed all-American hero who fights and defeats evil communists.

First Blood, which is adapted from a novel with the same name, gives us a very different Rambo.  A former Green Beret who served in Vietnam, where we later learn he was "an expert in guerrilla warfare...In Vietnam his job was to dispose of enemy personnel. To kill. Period", Rambo back home in the United States is an aimless drifter who can't fit back into American society.

But what struck me as most interesting about First Blood is how it resonates with what has been happening in America in the last few years, particularly after the death of George Floyd last year, over the abuse of police authority and the violent reaction it can elicit.

In a short introduction, Rambo visits the home of a former comrade in arms from Vietnam only to find out that the man had passed away months earlier from cancer. He then proceeds to walk into a nearby town called Hope, only to draw the attention of the town sheriff Will Teasle, portrayed by Brian Dennehy.  Teasle accosts Rambo and offers to give him a ride out of town.  Though he tries to present a friendly face to Rambo, he becomes cross when Rambo asks him why the sheriff won't allow him to get a bite to eat in the town.  After briefly letting his mask slip, Teasle's friendly tone returns and he tells Rambo that it's a boring town and he gets paid to keep it that way.  One gets the sense that Teasle has probably dealt with numerous other outside drifters in the same way.

The scene below is where the plot of First Blood kicks into motion:

Sheriff Teasle drops Rambo off outside of town, offers him some patronizing advice, and then cheerfully wishes him a good day before driving away.  All Rambo has to do is keep on walking away from the town and the movie ends right there.  Instead, we see Rambo pause momentarily in thought and then defiantly walk back towards the town.  Teasle, seeing in his rear view mirror that Rambo has challenged his authority, turns his car back around and arrests Rambo.
Now, to be clear, Teasle is abusing his position as a law enforcement officer and is violating Rambo's civil rights.  Rambo has done nothing wrong to justify Teasle's treatment of him.  Still, while Teasle is clearly in the wrong, he is not an evil man.  From his perspective, he has probably seen his share of drifters come into the town and engage in petty crimes or mischief, and Rambo fit the profile, which is why he tried to expedite Rambo's passage out of the town.*
Back at the station, we see Rambo being physically uncooperative when one of the deputies tries to take his fingerprints.  Another deputy becomes abusive towards Rambo, which triggers a flashback to torture he endured from his Vietnamese captors in the war, causing him to violently lash out and overpower a number of deputies before escaping.  Outside, he steals a motorbike from one of the town residents and rides off out of the town.
Flash forward to the climax of the movie.  After Rambo has evaded in turn the sheriff and then the National Guard trying to either capture or kill him, he makes his way back to the town and proceeds to blow up a gas station, a gun store and then shoots up the sheriff's station, before shooting and seriously wounding Teasle.  In his effort to keep the town boring, Teasle ultimately set in motion a chain of events that brought violence and destruction to the town.
What struck me as interesting about First Blood from a contemporary perspective is how it touches on the themes and arguments raised by both sides in the debate over police abuse of power and the responses to it in the Black Lives Matter protests across the country last year.
A frequent complaint made by the Back the Blue crowd is that blacks who are either physically hurt or killed in encounters with police officers are often at fault because they are non-compliant and uncooperative.  If they would just do what the police officers ask them to do and be deferential and respectful, they would not be harmed.  If one watches Rambo from that perspective, shouldn't we see him as the bad guy in First Blood?   After all, Rambo chose to go back into town knowing that he wasn't wanted there.  When being processed at the station, he was uncooperative with the deputies, causing several of them to become more aggressive with him in response.  He physically assaults about five or six of them while escaping and he overpowers a town resident and steals his motorbike.  In the end, Rambo returns to the town like a one man Antifa or Black Lives Matter protest, engaging in violence and property destruction.  However unjustly he was treated earlier in the movie, are we supposed to root for him when he blows up a gas station and goes gunning for the sheriff?
One thought I had was what if the events of First Blood happened in real life and Rambo was black, and we found out about it on the news?   Right wing talking heads like Tucker Carlson and Sean Hannity  would likely portray Rambo as a villain who engaged in violence against law enforcement and the property of law abiding small business owners.
The left, on the other hand, would highlight the mistreatment Rambo suffered at the hands of law enforcement, which they allege is all too typical of the kind of harassment and injustice black Americans experience virtually every day in their encounters with the police.  If Americans are upset about the violence they see in some protests against police brutality, then they should address the problem of police brutality so that there won't be a need for such protests.
What makes First Blood a good movie is that it is not a typical 80's action movie with a clear cut good guy vs. bad guy plot.  Rambo just wanted to pass through town and maybe get a bite to eat while Sheriff Teasle just saw a potentially troublesome drifter whom he wanted to get out of town as quickly and quietly as possible.  Neither of them ever wanted things to turn out the way they did, but their choices and actions set in motion a chain of events that rapidly spirals out of control.  How many encounters between African-Americans and white police officers follow a similar pattern?
* In the book from which the movie is adapted, Sheriff Teasle is a Korean war veteran who is bitter because he believes that Vietnam vets are given too much attention at the expense of Korean war vets whom the public has largely forgotten.  This motivation is never spelled out in the movie.
Source: anexerciseinfutility

First Blood and the Age of Black Lives Matter