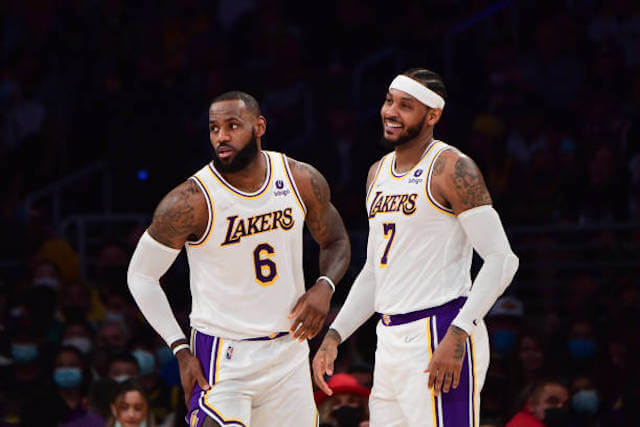 These days Los Angeles Lakers superstar LeBron James is one of the most recognizable faces and biggest names the NBA has ever seen. But his life story is truly one of the most inspiring as well as he had to overcome a lot to make it to where he is at now.

In fact, LeBron’s early life will be portrayed in an upcoming Universal film entitled “Shooting Stars.” The movie is being adapted from a book of the same name by Frank E. Flowers, Juel Taylor and Tony Rettenmaier, and now the casting of the movie has been revealed.

According to Ball is Life, one of the top high school prospects, Marquis ‘Mookie’ Cook, will portray the Lakers superstar in the film. Here is a look at how he will look portraying James as well as Jett Howard portraying Carmelo Anthony:

Cook is one of the top players in the high school class of 2023, ranked fifth overall by 24/7 Sports, and helped lead Compass Prep in Arizona to a second consecutive Geico Nationals appearance. At 6’7″, he definitely has the build to play a young LeBron and he has already committed to play college ball at the University of Oregon. Additionally, Jett Howard, the youngest son of Michigan head coach Juwan Howard, will portray Anthony.

The story follows James and his close friends as they navigate the ups and downs of the high school basketball season which came with the added pressure of playing alongside LeBron, already one of the biggest basketball stars in America while still in high school. The film will be directed by Chris Robinson.

Caleb McLaughlin of Stranger Things fame will play Dru Joyce III, one of LeBron’s closest friends and son of St. Vincent St. Mary head coach Dru Joyce II, who will be played by Wood Harris, who recently portrayed Spencer Haywood in the HBO series “Winning Time” which followed the Showtime Lakers during the 1980 season.

Back during his high school days, James took home the McDonald’s All-American Slam Dunk championship. But much to the dismay of many, he never took part in the competition as a pro. But that hasn’t stopped him from making a dream contest.

In a Twitter Q&A session, LeBron chose himself, Zach LaVine, Vince Carter and Dominique Wilkins as his picks for an all-time Slam Dunk competition, though he did not make his pick on who would come out on top.