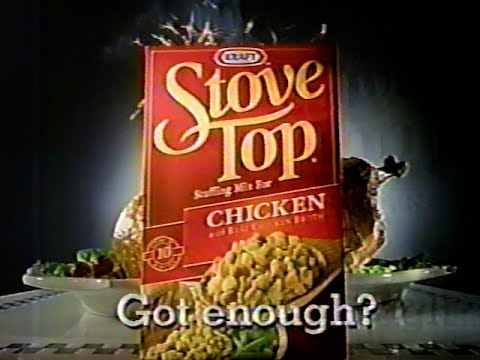 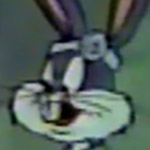 I’ve been searching through VHS tapes for old Christmas commercials, and in the process noticed that I’d amassed a nice little collection of Thanksgiving commercials. So, for the first time ever, here’s a Dino Drac article exclusively about old TG spots!

I’m already laughing at myself over this. An article that begins with a four-paragraph missive about Stove Top Stuffing has zero chance of going viral. But give it a chance, okay?

I’ve always loved food advertisements with that premise. The idea that you wouldn’t just reheat your Thanksgiving leftovers, but somehow reconstruct them. I’m more likely to eat that stuff straight out of the fridge, but the idea of playing a home version of Chopped is just so endearing.

Course, you’d never find Stove Top in my kitchen on Thanksgiving. I’m a stickler for homemade stuffing, especially because Thanksgiving often ends up being the ONLY day of the year that I get to make and eat it.

(And that’s not a knock against Stove Top. I love Stove Top! It’s right up there with ramen and Pepperidge Farm Goldfish on the list of foods I’d be happy to eat exclusively for the rest of my life.)

If you’ve never heard of Bradlees, it was similar to Kmart in scope and vibe, but quieter and less irritating. I *loved* that place.

While this commercial pushed Bradlees’ post-Thanksgiving sale, the stores were open on Thanksgiving Day, too. I should know! In the late ‘80s and early ‘90s, a few of my relatives always jetted to Bradlees right after dinner, hoping to score holiday bargains. I tagged along, because nothing settled the stomach after a big dinner like a cherry ICEE and a new action figure.

Many chains still stay open on Thanksgiving, but it’s (rightly) fallen out of fashion. The advent of the internet gave workers a voice, so we can no longer pretend that everyone working on major holidays just randomly volunteered to do it.

Still, I gotta be honest, it was such a thrill to go shopping on Thanksgiving back then. I’d scrounge up just enough to buy some dumb toy, and then consider it my first Christmas present of the season. If I had a buck leftover, I’d grab a bag of Bradlees’ famously stale popcorn on the way out.

By the time we got back to the party, half of the guests would be in food comas, and the other half would be talking at a volume only achievable after too much sambuca. Life was good, and so was that stale popcorn. It literally squeaked when you chewed it! God, I miss Bradlees.

When he wasn’t managing the British Bulldogs or introducing Zelda cartoons, Cap’n Lou Albano hosted his own wrestling hotline. Given how many different TV spots Lou shot for it, I guess it was pretty successful!

This particular spot aired for one day only: November 22nd, 1990, when the WWF’s fourth annual Survivor Series event was held. Lou promised match-by-match results, and I gotta tell ya, in pre-internet times, that was a HUGE draw. (Back then, it was a given that if I missed a wrestling PPV, I’d call a hotline like Lou’s for the results.)

For extra Thanksgiving flavor, you’ll notice that Cap’n Lou made his pitch while surrounded by live turkeys. Meanwhile, the WWF introduced its own live turkey at the 1990 Survivor Series. Accidental synchronicity is the best kind!

Bugs Bunny’s Thanksgiving Diet lurks somewhere in the memory banks of most people my age, but it’s one of those things that everyone forgets until they’re reminded of it. So, here’s your reminder. Bugs had a TG special!

The way I remember it, Bugs Bunny’s Thanksgiving Diet aired at the oddest times. It was treated like a true prime time special through most of the ‘80s, but during the ‘90s it wasn’t uncommon to see it at like, 3PM on a Sunday or something.

Because of that, it became less of an event you planned for — like, say, A Charlie Brown Thanksgiving — and more just something you happily discovered. Take this promo, for instance. In 1992, the special aired on Thanksgiving Day at 1:30 in the afternoon. Totally unusual, but so perfect if you were a kid waiting for the party to get rolling.

This is clearly a Thanksgiving commercial, but Ocean Spray sure worked hard to avoid saying so. Maybe they planned to run it through Christmas and thus needed to be vague?

Actually, this might be the first time I’ve seen cranberry juice pitched as an out-and-out holiday thing. I get the cranberry sauce connection, but I’m not sure I’m buying it. If anything, I’d think cranberry juice would be the last thing you’d want to drink at a dinner that already included the sauce.

There’s a subtle trashiness to the family dinner depicted here that I can’t help but love. For starters, I’m 99% sure that the “turkey” Mom busted out was one of those sketchy six-dollar rotisserie chickens that Stop & Shop makes you sign a waiver for.

This family definitely watched TV during dinner, and I guarantee you that at least three people wore backwards baseball caps the whole way through. Icons!

Thanks for reading. If you’re into old holiday-themed TV commercials, don’t worry, there are many more still to come between now and Christmas.