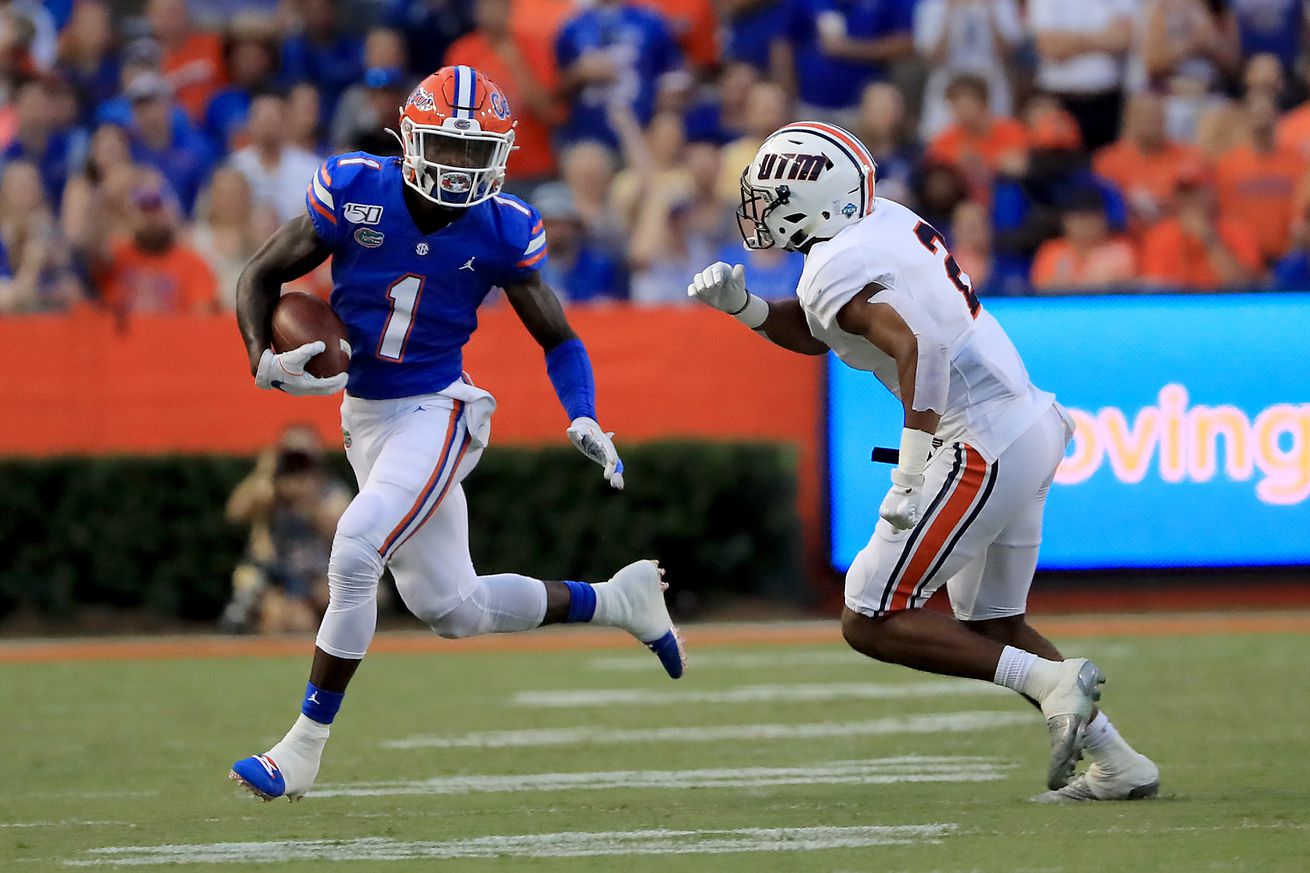 The Florida Gators’ 45-0 win over Tennessee-Martin was never in doubt.

Never mind the ESPNU broadcast crew’s insinuations that the Skyhawks were hanging around by converting third downs by the skin of their teeth and limiting Florida to just three points in the first quarter: This was an inevitable blowout that seemed to become one when the Gators wanted it to be.

But a pair of injuries to crucial contributors could cloud Florida’s season more than this win could ever have helped it — even if potential replacements shined in those players’ stead.

Here’s our Sunday morning takeaways from this game, which come without having given it or its highlights a second viewing.

Florida’s biggest worry has to be health

Two Florida Gators are wearing No. 1 this year, handed out in specific recognition of those players’ status on the team as ballers.

Both of those players didn’t make it to halftime of the second game without injury.

Kadarius Toney and CJ Henderson each went down hard in the first half — Toney on a tackle, Henderson on a leaping attempt to break up a deep ball that sent him tumbling over a wideout — and appeared visibly hurt both on the field and on the way off. Toney held his left arm gingerly en route to both the sideline and medical tent, while Henderson did not put significant weight on his left leg as he was being helped off the field by trainers.

Neither would return to the game, though Henderson appeared on the sideline shortly after halftime in a boot and on crutches. And neither seemed to have a clear prognosis as of Saturday night, with Dan Mullen providing little clarification in his postgame presser:

Florida probably won’t know more about either player’s status until further testing, and Mullen probably won’t share what he learns this Sunday until a Monday morning presser — though there’s obviously a chance that news, especially bad news, would leak after the results of Sunday tests get back to people in the program.

But losing either player for an extended period would obviously be damaging to Florida’s aspirations for this season. Toney is a potent playmaker, even if he showed on a one-yard run that required an reversal of the entire field that he’s still working on being reliable, and Henderson is Florida’s best corner. There are players with similar skill sets on the roster behind both, but none of those options have the blends of experience and talent that Toney and Henderson bring.

My gut says that both players won’t be playing next week at Kentucky, and that Toney — whose injury could well be a broken arm, given what we saw on the broadcast — may be out for longer than that. Florida can probably survive that game, and likely its next two games against a woeful Tennessee outfit and FCS Towson, without either player.

An October with games against Auburn, LSU, and Georgia looms afterward, though.

Depth and youth were on show — and impressive

One thing Florida fans probably wanted to see from this game was an extensive look at younger players like Jacob Copeland, the redshirt freshman wideout hyped as a potential playmaker in Toney’s vein, or the freshman defensive backs who are going to take over for Henderson and Marco Wilson as soon as next year. Thanks partly to those injuries to Toney and Henderson, we saw extensive looks and those players — and thanks to the lopsided nature of the game and the relaxed NCAA redshirt rules allowing teams to play younger players without expending years of their eligibility, we saw many more players, too.

And I saw a lot that I liked.

Copeland looked explosive on his few touches and caught a touchdown pass — a clear sign that Mullen gets the idea of feeding younger playmakers for recruiting’s sake. The freshman defensive backs — Jaydon Hill, Chester Kimbrough, and Kaiir Elam, in order of their contributions’ significance — all played exceptionally well as tacklers, with Elam also getting a late pick through some great technique to help preserve the Gators’ shutout.

But it wasn’t just those guys everyone had their eyes on who impressed. Iverson Clement —who was deep enough on the depth chart at running back last year to cross-train at defensive back — made probably the biggest play of any younger Florida player other than the above four, recording the Gators’ longest carry on a 41-yard scamper. Shawn Davis — young in the sense of not being fully entrenched at safety, I guess? — solidified his role there with an excellent night of play. Khris Bogle, Zachary Carter, and Andrew Chatfield were all effective as pass rushers. And Nay’Quan Wright looked decent in limited action.

And, frankly, I didn’t see much to dislike from any of those guys. That’s one of the things I look for in limited action from freshmen — whether they’re drowning rather than treading water — and I didn’t see that. Granted, this Skyhawks team didn’t have much capacity to challenge or show up any Florida players — but we still didn’t see mistakes, certainly not en masse.

That’s a good sign for both the near and far future.

Goodness, can Feleipe Franks be good

But Feleipe Franks threw for 270 yards and two touchdowns, ran for 37, and did everything right on the night.

But Franks going 25-for-27 was by far his most efficient performance as a starter.

But wouldn’t those stats be impressive against air? And wasn’t what Franks actually did in terms of quarterbackery — patiently waiting behind good pass protection, scrambling with purpose and extending plays as both a passer and a runner, and keeping a totally even keel in a weird game in which his offense sputtered early — wildly impressive, even before you account for how good his touchdown throws were?

Yeah, it’s Feleipe Franks. Credit is going to be hard for him to come by in and on the same corners that criticize him vehemently.

But he aerated this team. And I won’t forget that.

Florida is a pass-first team — and probably has to be

The reason Florida sputtered early? Trying too hard to establish the run, I think.

Florida’s first run went for 12 yards. The next five designed runs — which were, to be fair, arrayed around a Franks scramble for 22 yards — gained three, four, zero, zero, zero, and one yards.

After that point, Florida would sub in Dameon Pierce and get a little more creative with its running game while also opening up its passing game enough to unclog the box. But the Gators really, really did not have a lot of success running the ball early on ... and yet Franks still completed his first 15 passes and had no issue finding open receivers.

Franks also wasn’t Florida’s only effective QB on the night — Emory Jones and Kyle Trask were fine in their cameos, though Jones is still a significantly better runner than thrower. And Franks didn’t just have success throwing to one or two players: Nine Gators had multiple catches, and six had 20 or more receiving yards.

As it turns out, this Florida team that was thought to have an established quarterback and an embarrassment of riches when it comes to its receiving corps actually has those things, and also has a decent-to-good offensive line when it comes to pass blocking. (Florida has allowed two sacks in two games, and it’s not like Franks has been under a lot of duress.)

While that offensive line is figuring out how to run block, it makes sense for Florida to be a pass-first team when it needs to be. And Mullen is certainly smart enough to recognize that — even if he might also sense that the running game needs to be worked on before the meat of Florida’s schedule arrives.

So when this team needs to move the ball, expect it to happen mostly through the air.