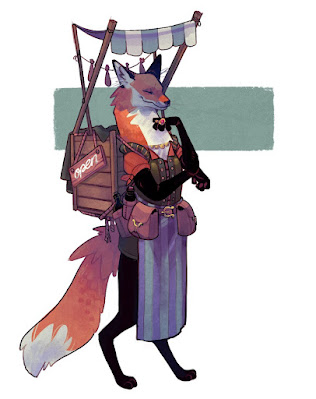 Fluff from a picture- Fox Merchant

At first glance, people may not trust a fox person as a merchant. That's not surprising, as nobody trusts fox people in the first place. But there's a big difference between stealing and encouraging people to spend their money in unwise ways; and foxes thrive exactly where that line is drawn. Let's talk about this one.

The stall is a modified shipping crate modified for easy carrying. Lightweight woods were used for its construction, and naturally the whole thing is collapsible and portable. The awning is designed to keep the sun out of the seller's eyes, but also acts as a way to "stand out" from the rest of the crowd. The stripes of the awning also have special significance- to most casual observers and patrons, they would assume it is merely decorative, but it's actually code. White indicates a "clean" stall, without stolen goods, and "blue" indicates a fox whose goods are not of interest to other foxes. In other words, they're selling boring junk and overpriced novelties to tourists.

Typically, customers are expected to either approach the fox merchant from the front to ask about goods, or approach from behind. Selecting their items from the crate and dropping the appropriate coins in the bags strung up between the poles. To any human, this idea seems absurd- too easy for a cutpurse. This goes into their selling style- this fox may simply walk in front of anyone who they sense needs something- allowing them to make a quick purchase without breaking their stride. The fox merchant is good enough to keep up a conversation while patrons simply take and pay for what they wish from behind the seller- the fox can sense the shifting of weights and items in the box, they know what you've taken. This almost sixth sense of being able to anticipate a sale opportunity is what gives fox merchants- the perfectly legal ones- their competitive edge.

How much trust do these foxes put in their clients to serve them from behind? Of course- the fox is not a human. Their ears and sense of touch is more then fine enough to tell if someone is cheating. Each bag is soaked in a specific perfume overnight, meaning a sudden heavy coin dropping in will release a specific odor- no way to fake the noise. And this technique isn't just for the loose change. The fox's tail is also dipped in another scent- this one is for defense. Anyone who tries to steal or cheat the merchant, or a cutpurse who thinks they're fast enough to outfox a fox will get a quick brush from the tail. The thief will falsely assume they can get away before the fox can turn around, when in reality they've already coated their legs with a an easy to follow scent. Fox merchants are infamous for allowing thieves to run off and finishing their day at work, before casually leading the guards to the thief's hideout after sundown.

The pouches and bottles are there for the fox. Honest. Personal affects meant to be separate from what they're selling- they travel light. This fox merchant will have a bottle of water (they can't drink wine anyway) and a bottle of a common potion. Most commonly they carry a potion of charm or suggestibility to spike the drinks of anyone foolish enough they can get a fox more sauced up then themselves.

The clothes and apron are garb from local merchant's guilds. The fox, as a beastperson, has less need for clothes then humans and has less modesty in public, so borrowing a few official pieces of trader garb can make the fox look more official. Trader aprons are, of course, purely ceremonial. This profession is so far removed from actual physical labor that a butcher's smock or blacksmith apron is merely a symbol to be adopted.

The rings are highly rated status symbols. Fox people value rubies the highest of all precious stones, including diamonds- though diamonds are still more rare and expensive, the red ruby is the most romantic and infatuating stone. As with any merchant, rings act as both a symbol of ones wealth AND a potential store of future wealth- if you're really down on your luck, you can sell one to recoup your losses on a failed trading trip. Any fox would be remiss to do something like that to their ruby rings- unless they have a plan to get it back.

The necklace, still a symbol of wealth, is more personal. Foxes are not immune to their own reputations as tricksters and thieves, and they primarily project this quality of themselves into their hands and tails. Anything worn close to the body is more sacred. For this fox, four circles represent four children in a wonderful marriage to their loving partner. Maybe that's the reason this fox is on the straight and narrow.

Fluff from a picture- Fox Merchant