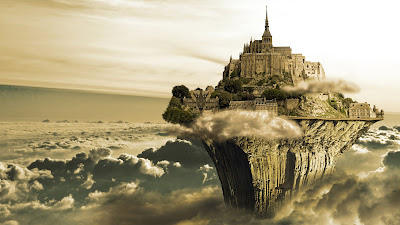 Above the world; above the sapphire mountains, above the sky-lands, above even the realms of dawn and dusk- there are the cosmic realms. Space, with glowing stars and planets and cosmic streams. These places, so far away that no mortals, or even immortals from your realm scarcely go.

For one reason or another, you've ended up here. But this realm is too abstract and deadly for a living thing; it is infinite and boundless in all directions and ways. There are Fortresses here; anchors of sanity and reality in this hostile place. These flying castles all look artificial, created from wood or brick or platinum- like flying fortresses in the cosmic void. 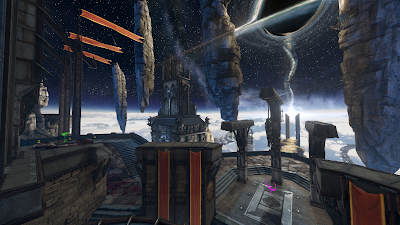 Flying Cosmic Fortresses
These cosmic fortresses are flying on the astral/cosmic realms. It's basically outer space, but remember this is fantasy outer space. Gravity is still down, you can breath in the air (it's cold and sterile), it's warm enough to not freeze, and so on. However, these effects that protect beings only exist in and a short distance outside it. If you "fell" off the fortress you'd fall down into the void and then float around like it was outer space.

The Fortresses themselves are totally alone and isolated. It's not possible to leave one without some kind of powerful magic or divine aide. You are within a far realm now; distant and separated from the Gods and Spirits of your home world. All Cleric spells and magic is cast as though the caster is a level lower.

To create a Flying Cosmic Fortress; roll once on each table below.

What does the Flying Cosmic Fortress look like? - Roll d20
[1] Fortress carved into a single giant stone.
[2] Stereotypical castle with a moat that endlessly drops water into the void.
[3] Ancient jungle temple.
[4] Huge overgrown tree or plant, windows carved into branches and stems.
[5] Giant Mansion floating in space.
[6] Multiple towers w/ Spinnerets.
[7] Like a giant bee hive or insect nest. Original inhabitants may or may not be exterminated.
[8] Crafted from metal, roughly bolted together.
[9] Looks like a giant crystal. All the "windows" here are colored as the crystal is. Random Color.
[10] Like a giant sailing ship. Like the ark, but huge-er and in space.
[11] Artificial donut shape from smooth stone. Normal gravity; down.
[12] Looks like a weird dark mass, undulating in space. Inside is a little better.
[13] Icosahedron sphere. Made of brass and exotic metals. Many inner chambers.
[14] Like a miniature city- brims with magictech lights.
[15] Glacier. Crevice leads to interior. Endless blizzard 5 in 6 turns on top.
[16] Looks like a chunk ripped from the normal world; a grassland with a small house on it. The edge just drops into void. House houses tunnel to interior dungeon inside the whole thing.
[17] Giant chained body of some space whale or other horrible giant creature from the depths of the cosmic realms. May or may not still be alive.
[18] Massive yawning cave entrance. The inside is subterranean, but has a large central chamber that looks out into the void. From inside, looks like a giant mouth kinda.
[19] Looks like a giant dark cube from the outside. Doors on the sides sheer-drop into void. No balconies, but sides are not perfectly smooth. Butt-clenching jumps on the outside.
[20] Separate chambers connected with large colorful tubes of various lengths and sizes. Looks like a god damn McDonald's playplace.

What's this Flying Cosmic Fortress's Special Feature? - Roll d8
[1] Fortress is a sphere. Gravity similar to our moon regardless of size. Think Mario Galaxy.
[2] It's really, really big. Megadungeon.
[3] Has a secondary fortress with the same designs as the first connected to it by a long chain.
[4] Built on/in/around a giant dead/sleeping megaverse giant God thing.
[5] Has a guidance system and could eventually be flown around like a really cool starship.
[6] Has a Room of Requirement like effect. Safe rooms or fresh water chambers appear when adventurers seek them. The rooms stop appearing if abused.
[7] The bottom has a second fortress, inverse gravity, light/dark world, etc. Roll again on the appearance table for the other side.
[8] Race of intelligent, neutral beings live there called the Curators. Use the Fantasy Race Generator to give them an appearance. They live in the walls, perform maintenance, and may believe the otherworldly entity who governs this place created them (it probably didn't). 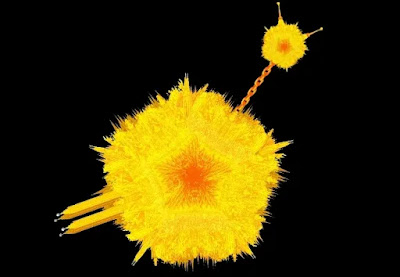 What can you see in the Void next to this Flying Cosmic Fortress? - Roll d12
[1] Black hole sucking up light. Fortress is not at risk. Don't fly off that direction.
[2] Several small "islands" of the same design as the main Fortress.
[3] Huge metal scaffolding and frames connected to island; possibly interstellar dock?
[4] It's surrounded by a nebula cloud; hard to see through.
[5] Field of undead servitors. Spaced apart evenly; a spherical defense grid.
[6] Shipwrecked hauls of space boats.
[7] Giant tentacles coming out of black portals. Fingers of an old one- mostly inactive.
[8] Swirling "winds" of elemental or magical energy. Turbulent approach.
[9] Buoys or signposts- hinting at dangers or distances.
[10] Stars. They are extra bright around this Fortress, making it dazzling.
[11] Nothing.
[12] Absolutely nothing.

What kind of Dangers are in this Fortress? - Roll d10
[1] Mechanical traps. Has a gravity changing puzzle that can fling you into void if you fuck up.
[2] Contains a cosmic forge or engine. Sporadically releases intense magic radiation.
[3] It's crumbling or being eroded by cosmic nothingness. Watch your step.
[4] Eternal guardian statue-people things. Only attack if you break "rules". Laser eyes.
[5] It has been used as storage for all manner of dangerous and cursed magic items.
[6] Infested with cosmic pests. Dangerous, only because cosmic. Think this blogpost.
[7] The place is partially cloaked in layers of astral space; the player-characters own ego and personal experiences begin to warp the place and manifest. Think Silent Hill.
[8] Fortress Stalkers. Monsters that are made of the same material and look just like parts of the fortress. Slink around silently and try to kill people. Native to this place.
[9] Otherworldly phenomena like time dilation, gravity anomalies, recursive hallways, non-euclidean geometry and more. Has a paradox contained within crystal; mostly safe.
[10] Masses of reactive elemental slime. Colored as element. Deal 1d6 damage of a random element when touched or disturbed. On a roll of 6, you suffer an extra effect.

How did you get to this Flying Cosmic Fortress? - Roll d6
[1] Walked through an unmarked portal / doorway in space-time.
[2] Extreme spell failure / broke a major magical artifact and this was the result.
[3] Took the Airship up too high. It can't come down without special preparations.
[4] It wasn't flying at first. Activated some dungeon's mechanism; it lifted off.
[5] Willing accepted a challenge from a powerful otherworldly entity to win favor. (Roll subtable)
[6] Unwillingly whisked away at the whim of some powerful otherworldly entity. (Roll subtable)

(Subtable) Why did some Supernatural being send you here? - Roll d6
[1] To test your resolve against difficult challenges.
[2] To perform some minor bit of "house keeping" that it doesn't want to do itself.
[3] To observe your kind in action up close and personal.
[4] To punish or execute. If you manage to survive, it will be impressed and let you go.
[5] To participate in a multiverse tournament battle to the death!
[6] It made a mistake when trying to teleport you somewhere else. 1 in 1000 chance if you teleport via genie you end up here instead. Takes 2d6 days for it to find you again.

Oh and if you want a quick way to understand and suck up the exact artstyle and feel I'm going for, just go play Amid Evil.