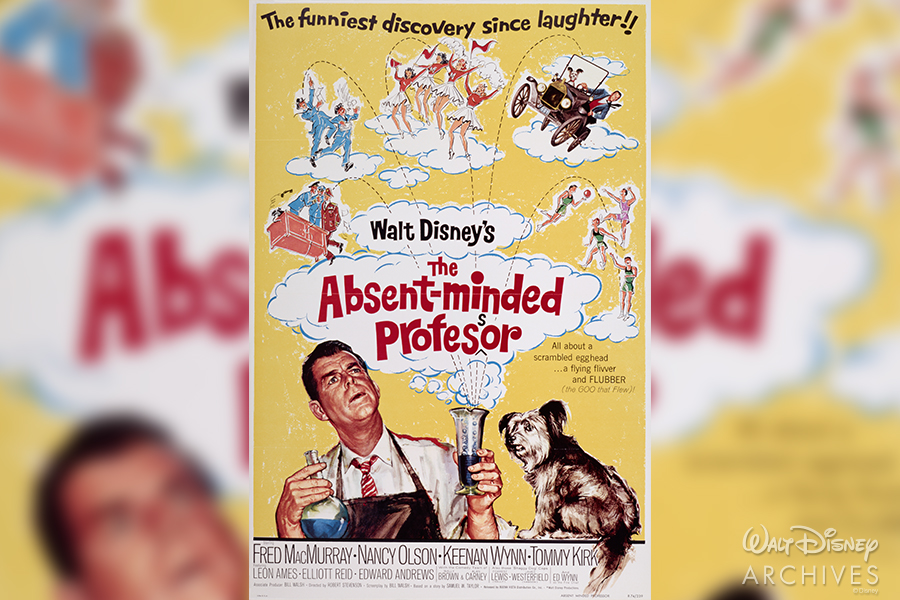 The road leading to the Walt Disney Archives has been traveled by many forms of transportation over the last 50 years. Volkswagen “beetles” from The Love Bug (1997) television movie, and Herbie: Fully Loaded (2005) reside in a secret warehouse, side by side. Models of the Black Pearl (Pirates of the Caribbean: The Curse of the Black Pearl, 2003) and the Endeavour (Pirates of the Caribbean: Dead Man’s Chest, 2006) are docked between the gold carriage from Cinderella (2015) and a pink golf cart driven by Sharpay Evans in High School Musical 2 (2007). A recent and exciting acquisition by the Archives is one of the oldest vehicles in the collection; a 1915 Model T Touring car.

Disney fans will instantly recognize the vehicle from its high-flying appearance in The Absent-Minded Professor (1961) and a return engagement in Son of Flubber (1963).

Production materials from The Absent-Minded Professor in the Archives indicate that at least three Model T’s were obtained by the studio for use in the film. Model T “#1” was functional and driven on screen by Professor Ned Brainard, played by the first Disney Legend, Fred MacMurray. It is believed that this car remained in the possession of the Disney studio and was last displayed by the Walt Disney Archives in 2014 at a special VIP event hosted by Bob Iger on the grounds of The Walt Disney Studios. Prior to that, the Model T was featured for over a year in the Archives’ 2012 exhibit, D23 Presents Treasures of the Walt Disney Archives at the Ronald Reagan Presidential Library and Museum.

A second car used in production had all mechanical parts removed and was “flown” via cables attached from above. Model T “#3” also appeared to fly by being lifted and hoisted in the air from below.

After the completion of both films, cars “#2” and “#3” were liquidated from the studio’s assets. It’s unclear exactly when and to whom the vehicles were dispersed, but one of the cars found its way into the possession of casino tycoon and avid car collector Bill Harrah. Bill was the founder of Harrah’s Hotels and Casinos and after acquiring over 1,400 cars, he had amassed one of the world’s largest collections of historic automobiles.

After Bill’s in 1978, the bulk of the Harrah collection was sold for over $100 million at auctions held between 1984 and 1986. Several hundred cars remained in the collection and became the basis for what is now the National Automobile Museum in Reno, Nevada.

It was at the first auction on September 29, 1984, that long-time Reno native, William C. Thornton, registered as bidder No. 132. With his winning bid of $5,000, William became the owner of a 1915 Model T Touring car (Flubber not included). Also sold that day was a 1935 Auburn Speedster for $105,000. With that kind of price tag, it’s understandable why William Thornton bought the Model T. As he recently told the Archives, “It was the only thing at the auction I could afford!”

The 1984 auction catalogue listed the Model T as “Lot No. 108 – 1915 Ford ‘Flying Fliver’ Touring Model T.” Merriam-Webster dictionary defines “flivver” as a “small, cheap, usually old automobile.” Henry Ford’s Model T car was also known as a “Tin Lizzie” or the “Leaping Lena.” At one point, Henry Ford had his team design a single-seat aircraft dubbed “The Ford Flivver,” nicknamed the “Model T of the Air.” Ford’s particular design never really got off the ground. Maybe Mr. Ford should have contacted Professor Brainard about his gravity-defying substance known as Flubber!

For many years, the Model T owned by William Thornton was on display at the Reno-Tahoe Visitor Center along with other antiques and memorabilia. When the building housing the Visitor Center was demolished in 1992, Thornton sold many of the exhibit objects from his personal collection, but retained possession of the Model T. Thereafter, the famous car resided in a private garage.

In May 2018, Thornton’s family contacted the Walt Disney Archives regarding his Model T. He had decided that perhaps it was time for the famous vehicle to make one last trip. After some discussion, William and his family agreed that the best place for the well-preserved car would be a home where the its magical past could be celebrated and appreciated. So, after several phone calls, text messages, emails and photo exchanges, plans were made to transfer ownership of the Model T back to The Walt Disney Company. William’s thoughtfulness and generosity will long be appreciated by Disney fans as future generations get the opportunity to view a real “classic” of both American automobile culture and Disney film history.

Surrounded by the Thornton family (and several inquisitive neighbors!) the “Flying Flivver” posed for photos on June 20, 2018, before beginning its journey from Reno to Los Angeles. Exactly how the Model T was transported is a secret closely guarded by the staff of the Walt Disney Archives. Let’s just say that for a few days in June, a security report detailing the disappearance of Flubber from the Archives was posted. The missing substance was eventually located in a warehouse next to Model T “#2” and a Volkswagen van from ABC’s hit television show Lost. A coincidence? Perhaps. Disney magic? More likely. The Model T is currently on display at the Bowers Museum, Anaheim, California as part of the “Inside the Walt Disney Archives: 50 Years of Preserving the Magic” exhibit.  The Bowers Museum re-opens on March 17 and the exhibit has been extended through June 20.

Be sure to bounce on over to Disney+ to catch that fantastical Flubber-ific flick, The Absent-Minded Professor!