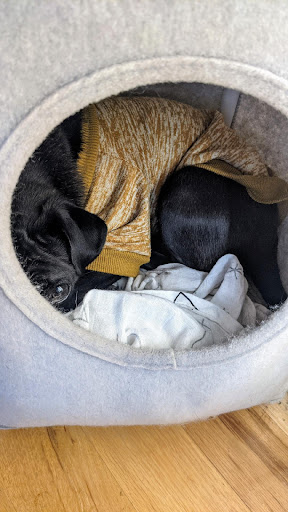 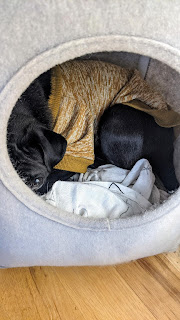 Sweater weather has finally arrived to my corner of Colorado. In fact the temperatures dropped so quick, even Nancy is ok sporting her lil' sweatshirt while she is taking a wee pug nap in her Ikea Lurvig uint. There is talk of snow tonight. It was bound to happen; we had a beautiful long fall.

I have been been cooking a lot lately. I mean I cook almost every day, but some days things are more exciting than other days. My bead blog is not turning into a food blog though, this is an exception type of post, just because these two plates turned out so pretty.
I like veggies a lot. An awful lot. I know how to bring their flavor out well. For an entire decade, we were exclusive. I went from vegetarian to vegan to raw vegan to eventually going back to eating whatever my body needed.

In a way my relationship to food is not entirely healthy. Those ten years were a search of the RIGHT thing. The way of eating that will prevent me from getting sick, getting old. Being a happy go luck vegetarian is a good thing. Being orthorexic and worrying if my raw almonds are really raw is not. Thinking that the RIGHT food will give one super powers over disease, aging and death is bullshit.

It's just another religion, system of thought and dogmatic hogwash that will eventually fail you. There is no getting out of here alive.

But these are things that are easy to believe when one is young and foolish. Then time and aches and life happen.

Unpreventable losses and sadness happen. No amount of raw, fermented foods, or Jesus, or raising my vibration makes the human condition go away. There is tremendous good that one witnesses in daily life and there are terrible bad things that coexist with the goodness.

There is no light without darkness. Perfection is unattainable and overrated and its possibility sold as a consumer product is only good for one thing: self flagellation leading to disappointment.

We all need to eat. Different people have different dietary needs. Me for example, despite my love for tasty animals these days, as I get older I find that my body functions  better with less saturated fat. Things feel lighter. I like eating colorful veggies and fruits and grains. They nourish me better.

I just no longer need to swear an undying fealty to my food.

Fuck it. Things change all the time.

I also don't like language like "clean eating". It's a classist and condescending term. There is no ethical or moral superiority or gold star you get because you buy organic, eat "clean".

Food is clean. If it's not clean, you get salmonella, campylobacter,etc. Personally, I experienced both examples growing up poor and eating whatever was given to me. And perhaps that's why I despise the elevation of this ideology that clean equals expensive and exclusive and morally superior.

Of course organic unprocessed food is good stuff. But it's a tremendous privilege to have access to this way of eating. And Instagram ready  gorgeous meals photographed well are not how you feed to a large family.

To weaponize this and rub it in that it is "clean" in comparison to what people who make less money work night and day, that adds insult to injury.

So as much as I like my veggies and pretty meals, here are some facts about the food you see me post on social media and these are key factors more important than  any ideology about pretty veggies:

-Due to having a beady business, I have  access to thousands of dollars worth of equipment to take pretty pictures of my food that will make it look better than it would in person. Lighting, photo editing, etc. This is not something you normally do when you cook an it's unfair to compare this to a family meal. This is nothing compared to what a cook book author or a food blogger does. There are much dirtier tricks to this trade than meet the eye.

-I don't cook for a hungry family. It's just the two of us, and when I feel like it, we eat. Things don't have to happen on a schedule.

- I live in a town where I have access to whatever my heart desires plus I can order things online, because companies like Misfits Market and Imperfect Foods deliver here, unlike many other places. This makes it so that if I do want to splurge on organic, I am paying half as much for it than friends who live in a food desert where if this stuff is ever available, it costs a fortune. This is a privilege. Being able to afford unprocessed food is a privilege too. 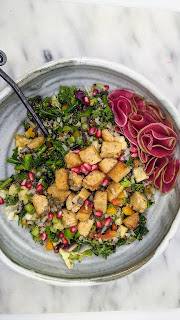 There is nothing wrong with liking my pretty veggies, they are good for me, they take pretty pictures, but please don't ever beat yourself up if your meals don't look like this. Let me just also add that this is not the type of meal that got my derriere nice and juicy during the pandemic either. I just did not put the rest on Facebook. The world did not need to see my pandemic ice cream habit.

Also, pictures are an illusion: I have a never ending supply of plates and bowls that don't match . My counter is not marble.My kitchen is a hot mess. But I do have a marble cutting board that makes for pretty pictures inside a light box. I also have a number of other pretty background surfaces too, and those are even phonier, because they just look like marble and wood board and such, but they are printed. They are great for beady pics. So just consider that when you look at a pretty picture like the one above, there is a lot going on.

I am cook book junkie. Rarely ever follow recipes, but I look at cookbooks and drool and eventually the ideas I see seep into my cooking. But, it helps that I have a never ending reference library that could keep me busy for ever.

This is all good, but where is the recipe? There is no recipe. I get whatever good looking veggies are on sale, then panic that they are going to turn and come up with something using them. So for the meal above I wanted to make something like a warm rice salad.

I had wild rice, red quinoa and jasmine rice at home. Knowing that the wild rice take longer to cook than the other two but also knowing that the water to grain ratio is the same, I boiled two cups of water and mixed up those three grains in the same cup and when it came to a boil, I dumped them in there and cooked them covered on low setting till the wild rice was soft and the jasmine rice was mushy. It worked out.

Then I looked at what veggies I had at home. Broccolini, asparagus and bell peppers got sauteed and seasoned. In a separate bowl I mixed chopped pineapple, cilantro and green onions. When the rice had a chance to cool a bit I mixed it together with the sauteed veggies and the cilantro mix.

There was a bagged chopped salad ready to give up on humanity that needed a last chance and it ended up on the bottom of the bowl, as a mix in.

A half a block of tempeh got browned in coconut oil and lemon flavored olive oil. Capers were added and lemon juice and it was sort of Piccata- like.

Then to make this super photogenic and because it's the beginning of pomegranate season I sprinkled pomegranate seeds on top. I always make a mess with this. I know there are dozen fool proof ways of separating the arils from the pith, but I am a fool. Google however  is full of great ideas on this subject. It seems to me that this is a matter of practice. By the time the stores will be out of pomegranate, I will be more efficient and less messy.

The watermelon radish pickled side salad was folded up into pretty ruffles in the side of the bowl. It was sliced alongside my finger on a mandolin slicer and then salted, a little bit of sugar and  vinegar was added. I made wild violet vinegar at the recommendation of a friend at the end of spring. I then forgot about it, and just re-discovered it in the fridge.The violet scent is gone now, but it's still tasty. My finger is fine, but I don't recommend throwing away the part of the mandolin slicer that protects your hand in the name of " I don't need this, this is for sissies."It's a bad idea. 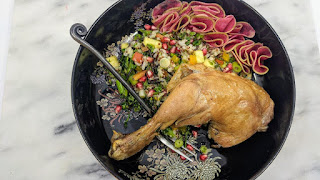 On Jamie's plate there is a chicken thigh. It was a frozen, pre-made comfit I just heated up.  Or I could have purchased heirloom baby chicks and raised them in a beetle kill wood hand built coop, ethically slaughtered them and cooked them in their own fat while sniffing my own rose scented farts and extolling the virtues of clean living and how everyone can just do what I do.

So I guess this blog is not going to turn into a food blog. I am not going to write recipes and cook books. I am going to randomly buy pretty and colorful things because they are like beads in their colorful way and before they go bad, I will frantically put them together in a lovely, unexpected meal.

If it's one of the days when my light box is on the dining table to take pictures of the work that brings home the bacon; well, on those days there will be pretty food pictures.

On other days I will eat donuts and not put them on Facebook or Instagram. But don't ever think that there is some unattainable standard of purity and goodness that you personally need to measure up to, or I will throw Twinkies at you, and guess what, we won't go to hell if we eat them.