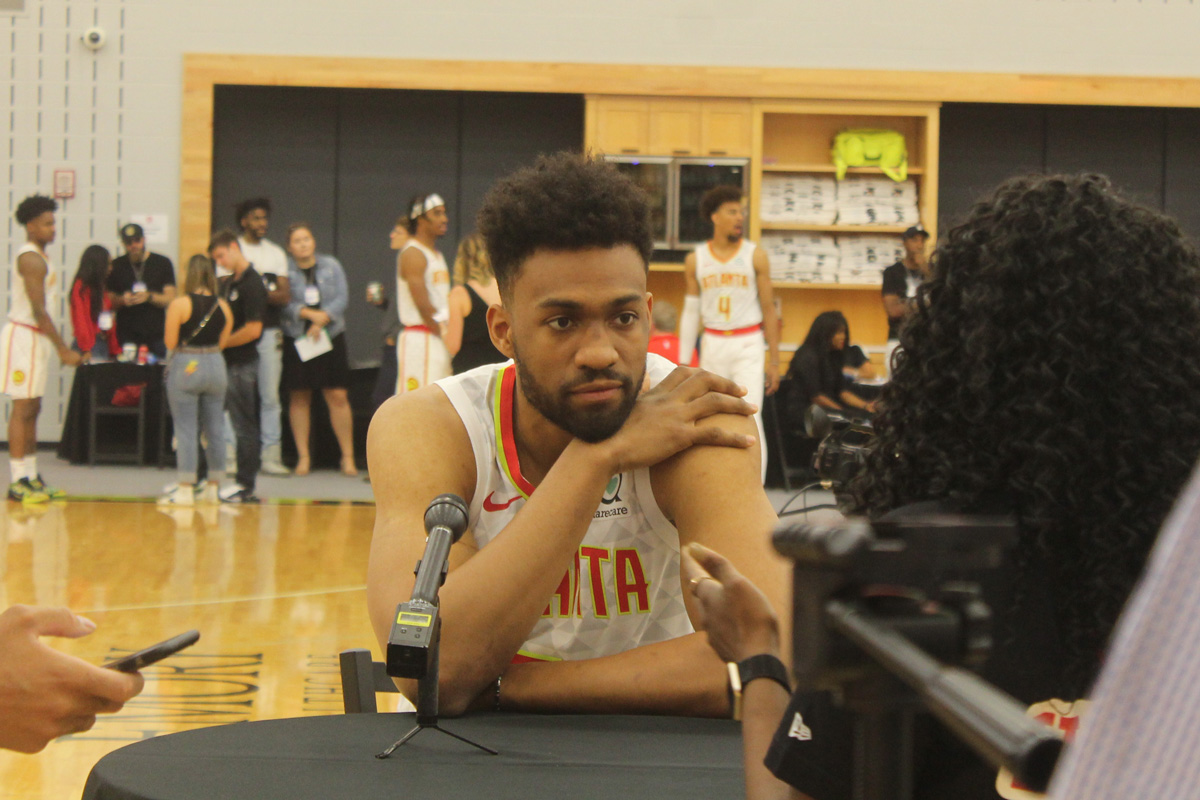 For the Atlanta Hawks, the upcoming season signals “a fresh start”

With the Atlanta Hawks training camp set to open this week and the first preseason game just a week away—Atlanta will host the New Orleans Pelicans and No. 1 overall draft pick Zion Williamson at State Farm Arena on October 7—there was still the business of hosting local reporters, television and radio personalities, bloggers, and photographers for the annual media day at the team’s Brookhaven practice facility, the Emory Sports Medicine Complex. As first-year Hawks forward and six-year NBA veteran Jabari Parker said to me at the start of Monday’s first interview session, “It’s a fresh start for me and the team.”

“Everybody’s 0-0, so we should take advantage of that and start off the right way,” Parker said.

Like many of the 30 teams in the NBA, the Hawks will start the 2019-20 season with two young superstars: third-year power forward John Collins and second-year point guard Trae Young. Alongside them is starting center Alex Len, who an hour before the start of media day was seen going through shooting drills with team trainers. In his first year with the Hawks, Len averaged a career-high 11 points per game and shot a career-high .363 percent from three-point range. There’s also second-year shooting guard Kevin Huerter, whose 9.7 points per game and .385 three-point percentage helped make the upstate New York native a fan favorite. Huerter even exchanged jerseys with now retired Miami Heat star Dwyane Wade following a game late last season.

But what might be most interesting thing about the Hawks this season is the new faces on the roster. A mix of veterans and rookies, a strong performance from these new players will be necessary for the team to make it to the playoffs for the first time in three years.

“We have a young team and a lot of new guys,” said Huerter. “We have a lot of talent that came into the building this summer. Everyone we have gotten over the off-season has been great for us.”

“I can’t believe it’s going that quick; I remember my first media day and now I’m over here talking about year seven,” said Crabbe, who will be playing for his third NBA team this year and is looking to get back to form after playing just 43 games for the Nets last season. “It’s been a good month and a half that I’ve been here [in Atlanta], and you can tell there’s going to be good energy this year.”

“The transition has been real nice,” Parker said of his move to Atlanta this summer. “Hopefully I can fit in here and add on to the program.” He mentioned “staying healthy and keeping my body in tact” as a goal for this coming season. Parker has suffered a number of injuries throughout his career and played with both the Chicago Bulls and Washington Wizards last season before signing with the Hawks as a free agent. “This team kind of overachieved everyone’s expectations [last year], and I want to use my experience and hopefully grow with this team,” he said.

Meanwhile, the Hawks rookies—Reddish, Hunter, and Fernando—are preparing for the start of their careers. “This is a dream come true, of course,” said Fernando, a native of Angola who played at the University of Maryland. “I can’t even put it into words. Even the preseason, just knowing that I’m about to get on the court for the first time as an NBA player, it’s exciting, and I’m trying to take it all in.”

Reddish, who was selected 10th overall, may have a bigger role to fill for the team but is equally excited to get his NBA career started. “I’m looking forward to these upcoming years. Watching these guys develop over the past few years has been exciting for me, and having the fans allow us to develop and improve will help us with our everyday stuff.”

Some are still hoping for their big moment. Former Louisville player and second-year forward Ray Spalding sat at his assigned table to the far left of the gym with a slight smile on his face and cellphone in his hand. Drafted in the second round by Philadelphia and traded to Dallas shortly after in 2018, Spalding was moved again to Phoenix after playing just one game with the Mavericks. 13 games (three starts) was all the time he spent with the Suns, but it was enough to show Hawks brass that it was worth inviting to training camp this week. “I’m just here at the gym, and I go back home on the weekends,” said Spalding, 22, 6-10 and wiry. “This being my second year, I’m looking forward to keeping my foot in the door by really showing the coaches how dependable I am as a player.”

The post For the Atlanta Hawks, the upcoming season signals “a fresh start” appeared first on Atlanta Magazine.

For the Atlanta Hawks, the upcoming season signals “a fresh start”