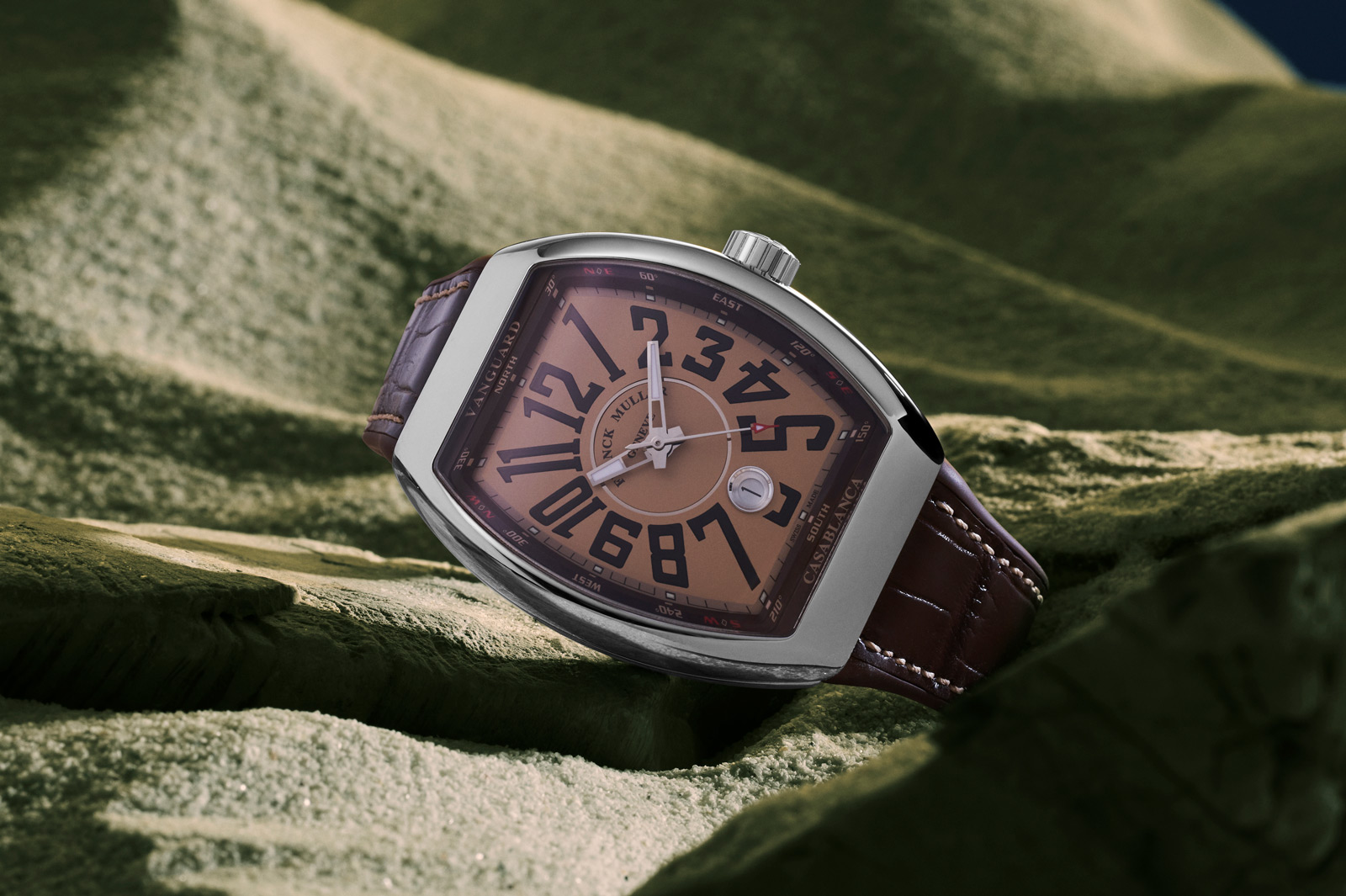 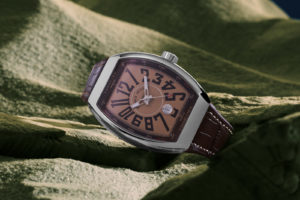 Now in its third decade, Franck Muller is a success story of independent watchmaking, having gone from a small outfit centred on its eponymous founder to a brand with nine-figure annual revenue.

Alongside its stable of inventive and highly complicated wristwatches, the brand is most famous for its tonneau-shaped watch case – the Cintrée Curvex – which was so successful in the 1990s that made tonneau cases a thing in contemporary watchmaking.

The new Vanguard Casablanca is an evolution of that tonneau shape, while adopting the palette and styling of the Cintrée Curvex Casablanca that was a bestseller when it was launched in 1998. While the Vanguard was introduced in 2014, the Casablanca makes it debuts with a new 43 mm size that fills the gap between the 41 mm and 45 mm cases. 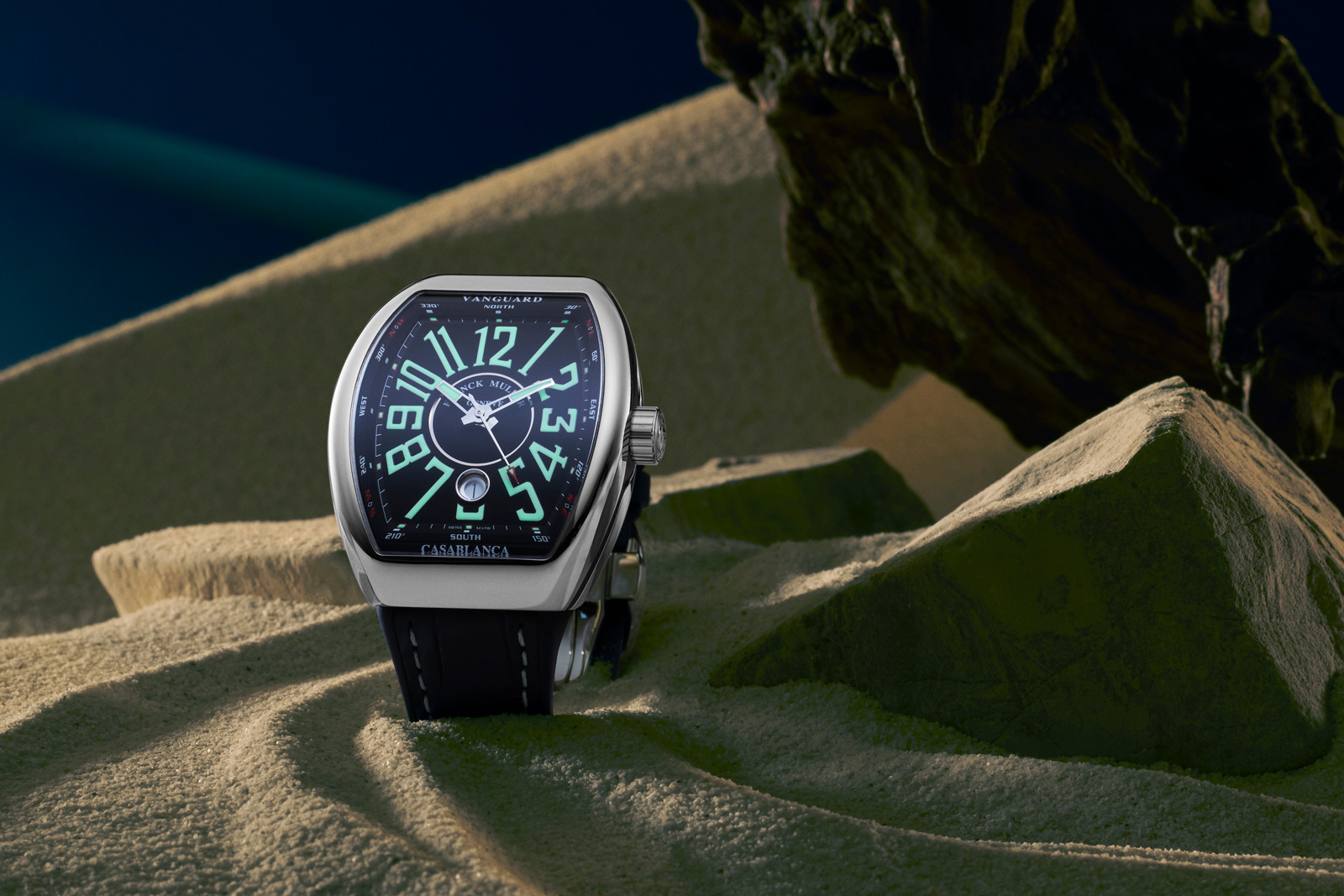 The original Casablanca took its name from the 1942 film starring Humphrey Bogart and Ingrid Bergman. Meant to evoke the era of steamship travel and exotic port cities, the Casablanca had oversized Arabic numerals and dials in retro colours like salmon and sand.

That’s been translated into the Vanguard Casablanca, which blends the retro style of the original with a distinctly modern case in a sporty, masculine size. It’s a strong and appealing design that is arguably even more quintessentially Franck Muller than the earlier versions of the Vanguard. 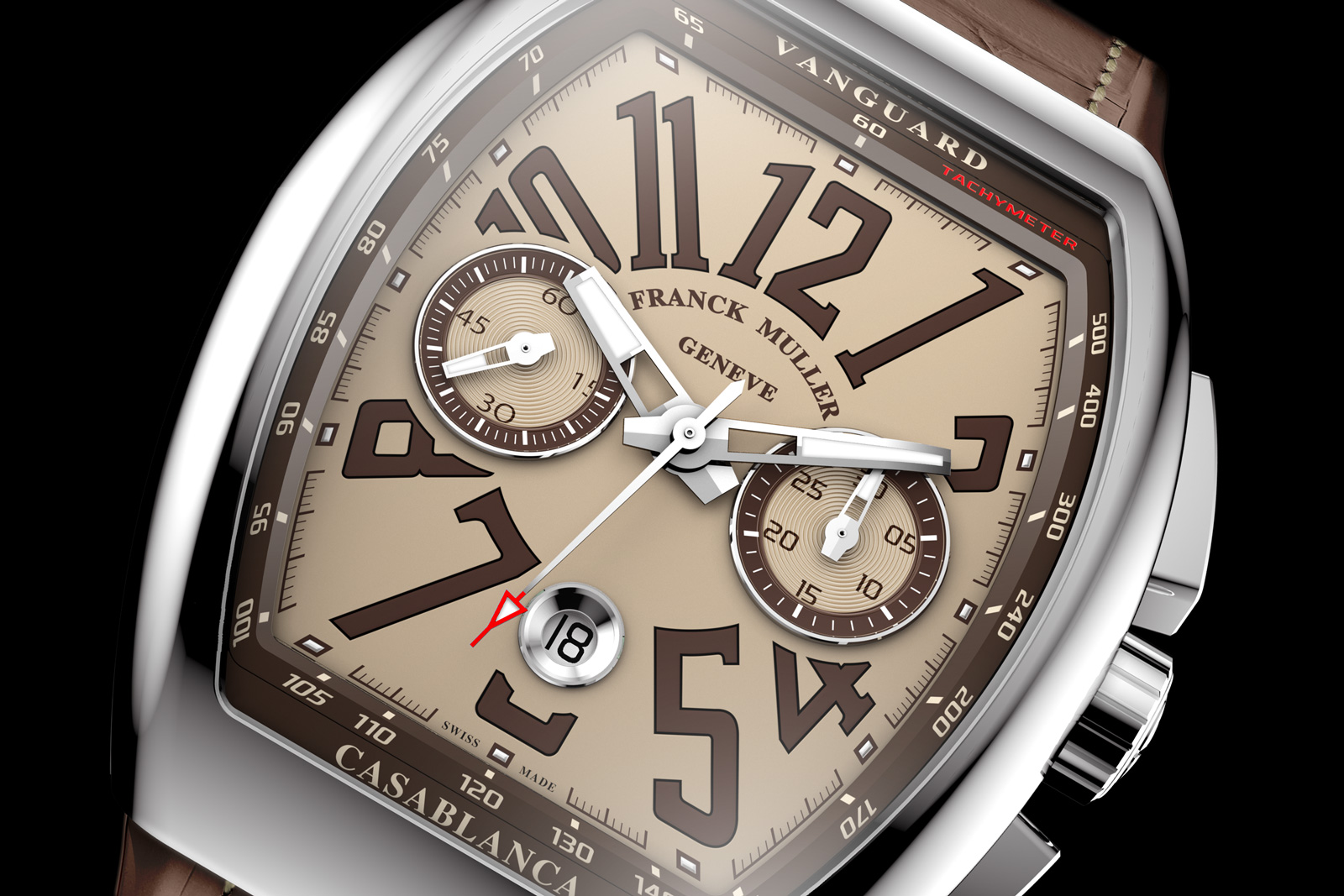 Because the look is very much typical of Franck Muller, this will appeal best to someone who like the brand, particularly if the existing 41 mm and 45 mm cases were not the right size. With the Casablanca, the Vanguard is available in a 43 mm size for the first time, but it is only available in South East Asia. 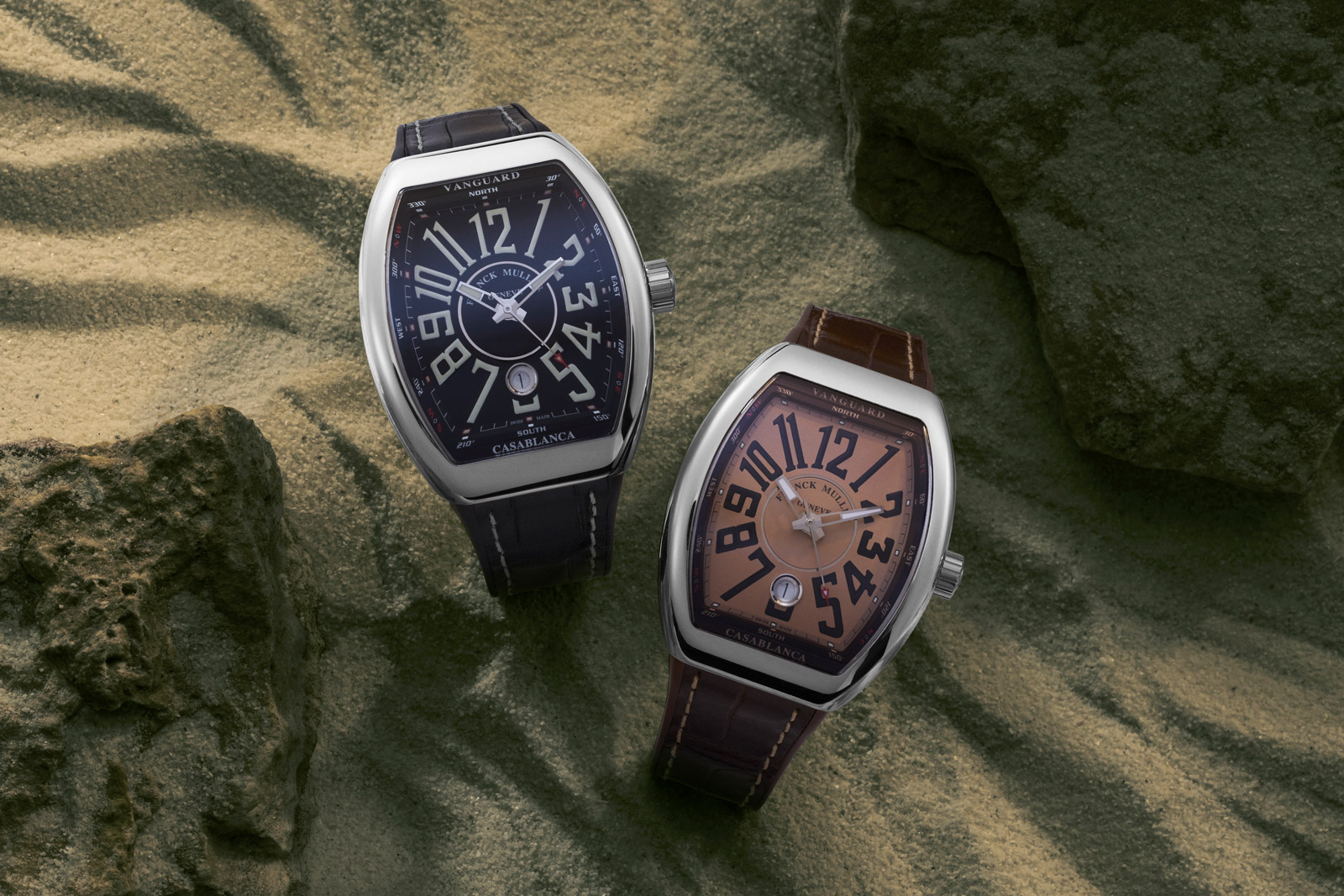 Very much a tonneau case still, the Vanguard case is essentially modern take on the classic Cintrée Curvex. A prominent recessed border filled with black rubber runs along its perimeter, separating the case into top halves lengthwise. The break between the top and bottom halves reduces the perceived thickness of the case, while also making its lines more obvious.

The Vanguard Casablanca is available in two sizes, 41 mm and 43 mm, with the larger size being exclusive to Southeast Asia. As on the original, the “exploding” numerals are filled with luminescent material for nighttime legibility

The Vanguard Casablanca is available in a quartet of colours inspired by the 1990s original – blue, black, caramel, and salmon. All of the colours hark back to the brand’s history because they are modelled on past dials offered by Franck Muller.

Especially appealing are the dials with warm tones, namely the caramel and salmon. But for those who fancy a bolder look, the boutique-only edition that has a blue-on-black palette is the way to go. 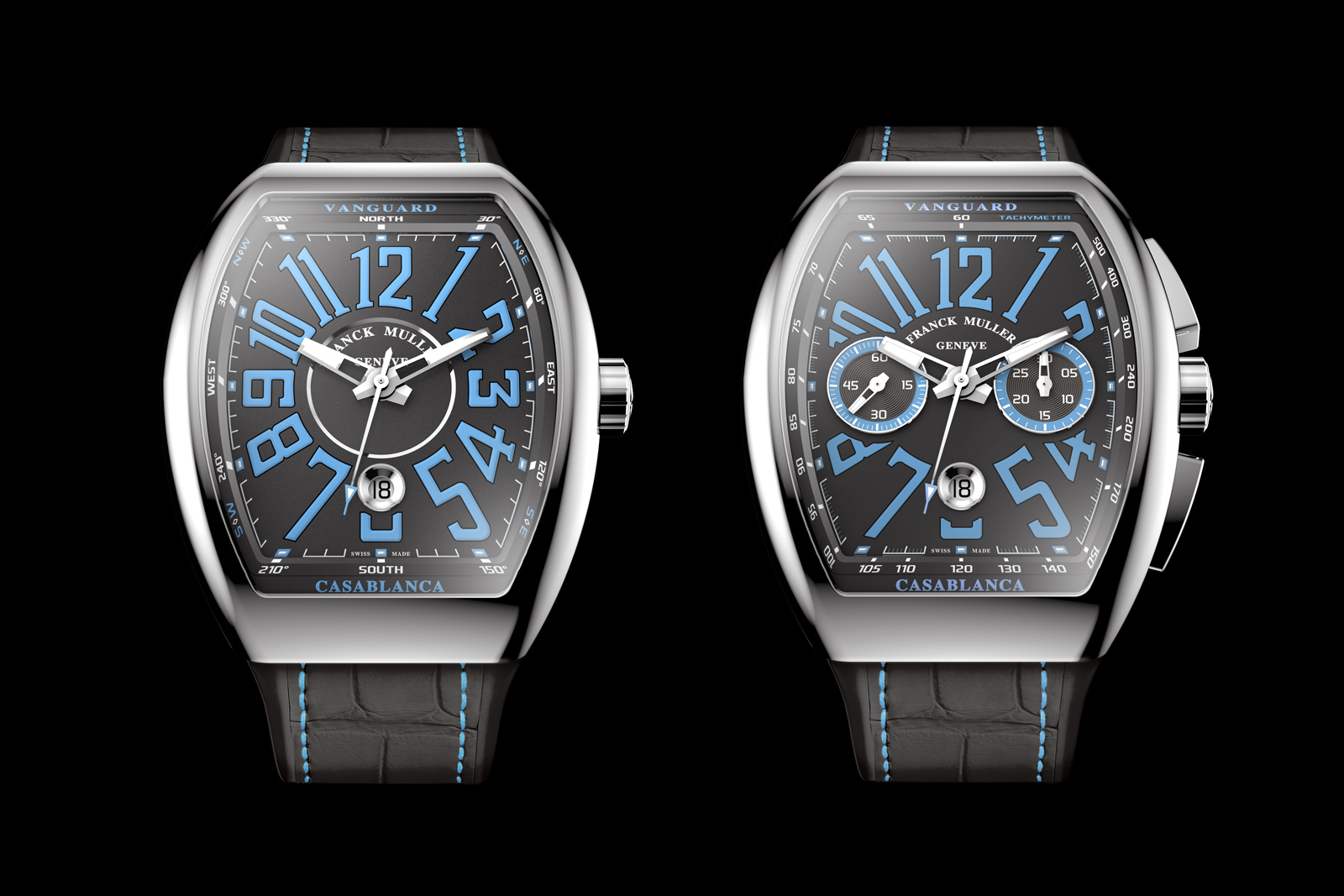 And beating inside the time-only version is the FM 800-DT, a calibre that shares the same diameter and power reserve as the ETA 2892, stands slightly thicker. It is produced in-house by Franck Muller, but was originally designed by German watchmaker Martin Braun.

Like most Franck Muller automatic movements, it has a solid platinum rotor, though that’s entirely hidden under the solid case back.