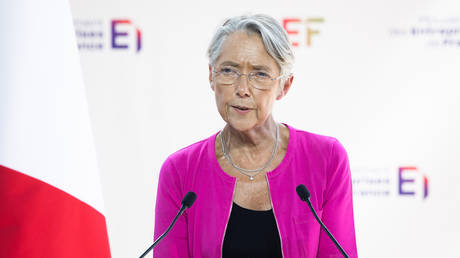 Speaking at a conference in Paris held by the Movement of the Enterprises of France (MEDEF) – France’s largest employer federation – Borne began by mentioning the sanctions imposed on Moscow over the conflict in Ukraine, and thanked the companies that pulled out of the Russian market to ensure “these sanctions are effective.”

However, the prime minister acknowledged that the sanctions backfired on Paris in the form of inflation, and Russia can still halt gas deliveries in response. If Moscow does so, Europe will face “enormous consequences,” since it has “no immediately available alternatives” – and France, while less exposed to this risk compared with its neighbors, will not be safe, Borne explained.

“In the face of a shortage risk, there is but one option: reducing energy consumption,” she told business leaders in attendance.

“I suggest we manage this reduction together. If we do not, if everyone does not play their part, brutal gas outages could happen before long, with serious consequences for our economy and society,” Borne warned.

France’s top priority now is “stopping any energy consumption that is not vital,” which is the point of the ‘energy sobriety plan’ announced by French President Emmanuel Macron in July, the prime minister said. “This plan is a pact that we are proposing to you: saving energy by choice instead of facing blackouts imposed by force.”

Electricity costs in Germany and France reached record highs on Friday, driven by Moscow’s plan to shut down the last operational turbine on the Nord Stream 1 pipeline for three days’ maintenance. They are not the only countries feeling the bite of sanctions aimed at Russia. People across Europe are stockpiling whatever fuel they can obtain – including firewood and coal – for the long winter ahead.

Last week, Macron said France was heading towards the “end of abundance” and will have to make sacrifices.