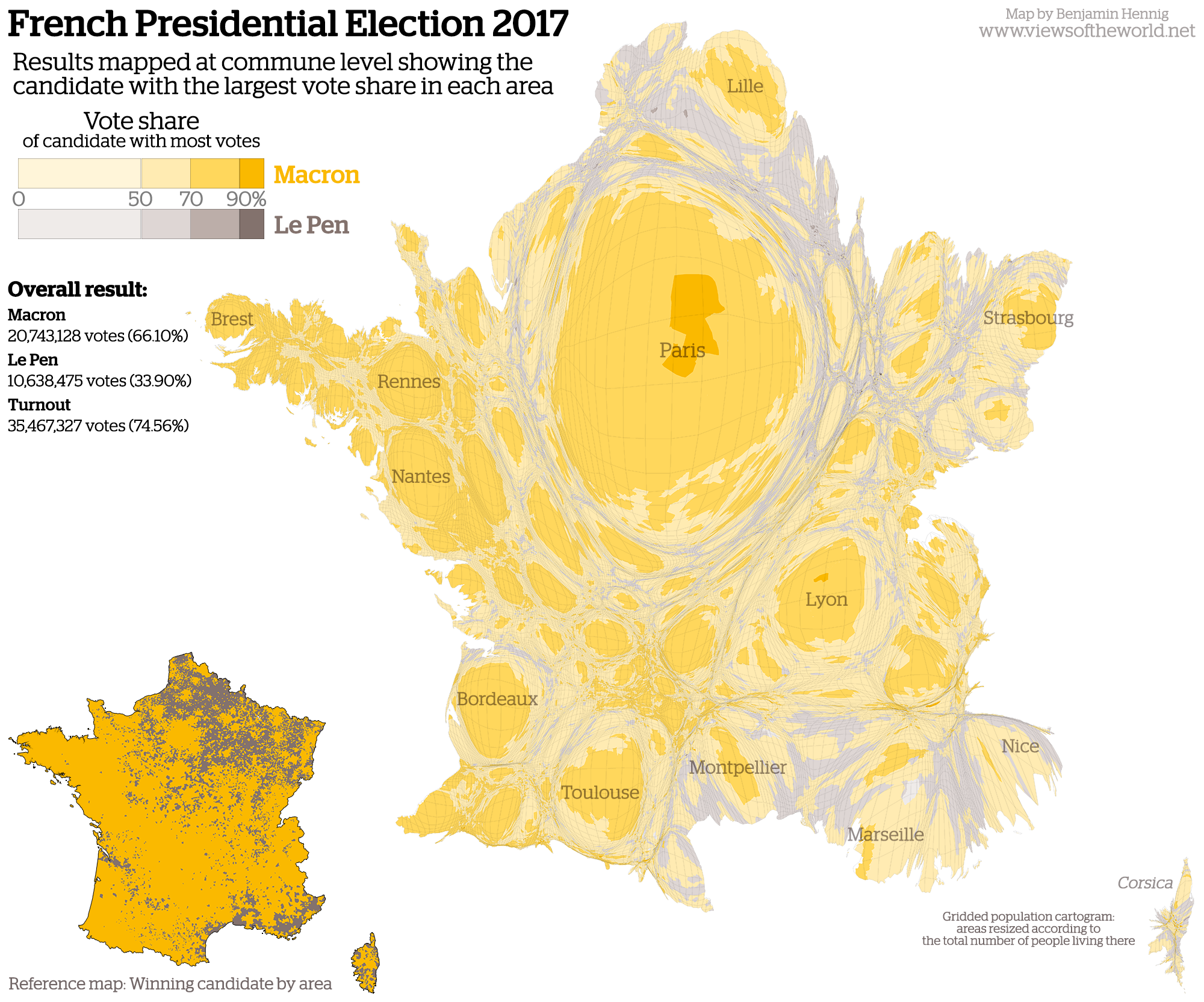 The second (and decisive) round of this year’s French presidential election has led to a decisive victory of Emmanuel Macron of the social-liberal En Marche! party which was founded just a year before. Unlike other recent votes that have reached global attention, this vote was not close and was widely described as a sweeping victory. Macron secured 66.1% (20,743,128) of the second round votes against Marine Le Pen of Front National who received 33.9% (10,638,475) of the votes. Another difference was also the political message which did less resonate with nationalist or far-right rhetoric but was built on a pro-European and liberal campaign. 11.52% of the voters gave neither of the two candidates their vote by handing in blank or null ballots. Turnout was at 74.46%, only slightly lower than in the first round (77.77%) where none of the 11 candidates could secure an overall majority (Macron received 24.01%, Le Pen 21.30% which put them in the second round).
The following cartogram shows how decisive the political landscape of France in the second round of the election including the winning candidate’s vote share at municipal level (commune) in an equal-population projection, complemented by a normal map showing the overall distribution of winning votes at the same geographical level:

The cartogram is a visualisation that shows the votes shares proportional to the overall population distribution. This helps to relativise the impact of the votes in less densely populated areas and at the same time puts a magnifying glass on the urban areas. Here it becomes visible how strong Macron’s message resonated in most of the urban areas. Le Pen’s strongholds were mostly rural areas, most of which are in the north and the southeast of France and which show high unemployment rates as highlighted in a New York Times analysis. Only in these areas did Le Pen score more strongly also in some of the more populated urban fringes such as those around the old industrial city of Lille in in northern France, and the cities along the Mediterranean coast. But even here Macron managed to secure the vote in the city centres.
For the incoming president it will now be the next challenge to equally change the political landscapes in his favour at the upcoming parliamentary elections in June. Only these will allow him to build the necessary political support for his presidency

Technical note: These maps use the colour scheme also featured in the election coverage of the French Le Monde newspaper. The vote share classification uses the same as in the US presidential election map.

The content on this page has been created by Benjamin Hennig using data by the French Ministère de l’Intérieur (published on the OpenDataSoft platform). Please contact me for further details and the terms of use.