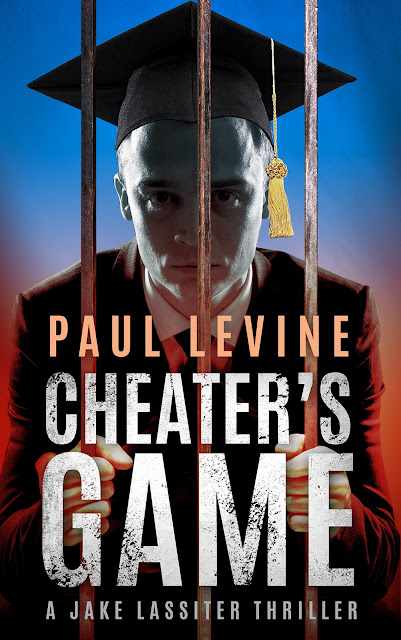 Mary Putnam takes a break from her usual crafty creations and literary libations to review Paul Levine's Cheater's Game today. Let's hear what she has to day...
Paul Levine's CHEATER'S GAME, book 14 in his series of Jake Lassiter legal thrillers (to be released on April 20, 2020), struck a chord with me on many happy levels even though I'd not previously read any of Paul's books. Before I delve into the details, a few disclaimers:
Disclaimer #1: Although I'd not met his characters before, I have had the pleasure of meeting Paul a few times at various mystery conferences and events. Also, I received a copy of this book for free. I've done my best to write a fair and unbiased review.
Disclaimer #2: It's April 14 of 2020 and I've not left my house since a month ago--Friday the 13th!--due to the COVID-19 outbreak. Of course the world is not the same since I read this book, while on a cruise ship the first week in March. So the lens through which I'm seeing everything at the moment is a bit skewed.
I hope we'll all persevere and find humor in a variety of non-ideal situations, like the novel's hero, Jake Lassiter, does often. For example, as Jake grapples with his own medical challenges he observes: "I'm sure doctors invented hospital gowns to embarrass patients so completely that they'll be more amenable to following orders." (I'm also noticing you can't say "embarrass" without saying "bare-ass" -- coincidence? -- I think not.)
As the story unfolds, the author deftly illuminates various themes and topics "ripped from the headlines" (e.g. the college admissions scandal and football head injuries) as well as timeless questions like: "How can I convince my kid of anything while he thinks he knows more than me?"
Jake's character is well-drawn and well-balanced; not too perfect so as to become a caricature (as happens in some thrillers!) yet not so flawed we don't believe he has a chance of succeeding in his mission to save his nephew, Kip, from himself. I'm a sucker for an underdog, and also for a guy who's secure enough to NOT be intimidated by a strong and/or smart woman, so I enjoyed the relationship between Jake and his super-smart fiancee, Dr. Melissa Gold. They make a great team, struggling to help the still-very-much-a-kid Kip, who's smart on many counts--except seeing that he needs help.
I agree with Michael Connelly who called CHEATER'S GAME: "Clever, funny and on point when it comes to the inequities of society and the justice system." My favorite books enlighten while they entertain. This does both while talking the reader on a fun ride with surprising plot twists, a tour of sunny Florida and parts of California, and even some tasty food. Yum!
Source: mysteryplayground.net