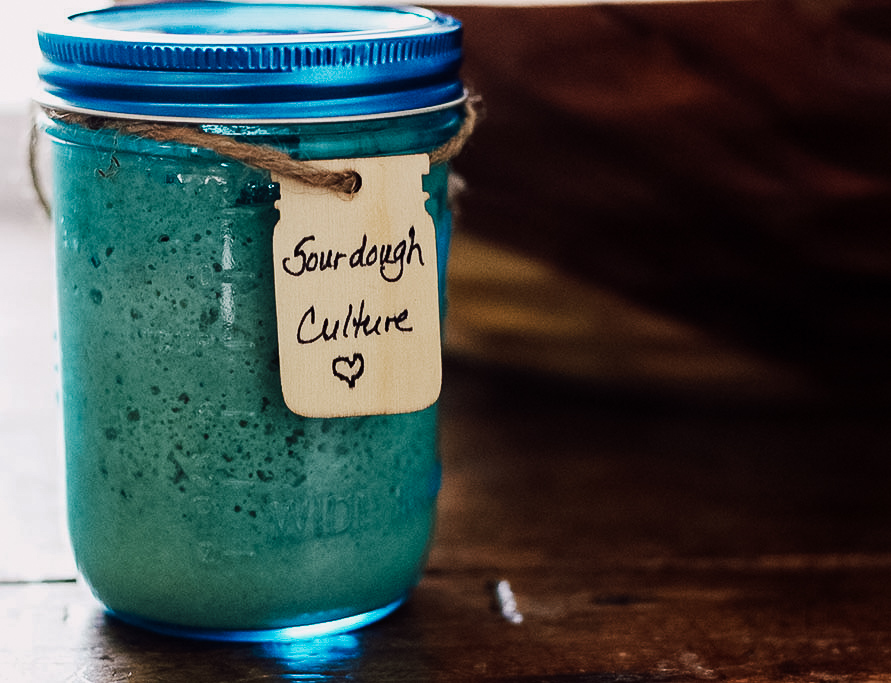 If you like this, then please share!
Personal Reasons My Family Eats Cultured Foods 10 Natural Miracles I Found To Lower Stress

Flour And Water Gets Magical 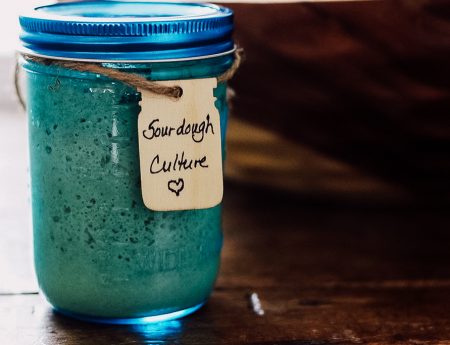 So as I write, I'm waiting for my starter to become bubbly. Sourdough bread is only flour, water, and salt. It's hard to believe it all comes together to make something that has such flavor and character. Bread made with a sourdough culture is a completely different food than bread made without this probiotic combination of bacteria and yeasts.  I love caring for my sourdough starter, and I've spent many a day waiting for it to get bubbly and rise in the jar so I can bake with it.  I love watching it rise and bake, and while much of the world was freaking out about gluten, I fell deeper in love with this bread that helped me escape all my fears and worries about the dreaded gluten. I talk about it constantly to the people that work with me. I send them endless pictures of my bread even though I bake weekly and they have seen so many pictures. Nothing has given me more pleasure than pulling loaves of crispy sourdough bread from the oven. I never tire of it, and after seventeen years with the same starter and hundreds of loaves of bread, I've decided it is one of my most cherished possessions, along with my kefir grains, and kombucha SCOBY.  My deepest desire is for you to love it too and reap the benefits, not to mention the feeling you'll get when you feel like an artisan bread maker. 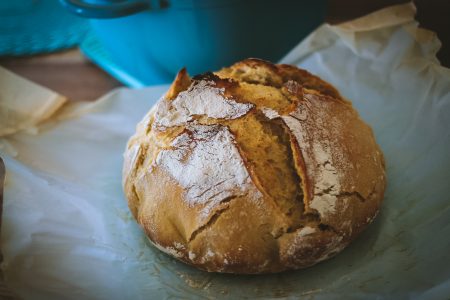 Before the 1950s, most bread bakeries ran two shifts of workers because the dough was fermented throughout the night with a long and slow process using a culture that contained the lactobacillus bacteria. This slow process was necessary for bread to be properly digested. In the process of making sourdough bread, the bran in the flour is broken down during the long rising time, releasing nutrients into the dough. Only when wheat gluten is properly fermented or sprouted (to learn more about sprouted bread click here) is it healthy for human consumption.  When not, it is potentially one of the most highly allergenic foods we eat. Phytic acid, or phytate, is found in plant seeds. It serves as the main storage form of phosphorus in the seeds. It impairs the absorption of iron, zinc, and calcium and may promote mineral deficiencies in the body. 1 It is often referred to as an anti-nutrient. The phytic acid in grain needs to be 90% neutralized in order for the minerals to be absorbed by the human body. When you naturally ferment or sprout bread, you eliminate all phytic acid. About 90% of the phytic acid remains in bread made with instant yeasts unless it is sprouted or bread made with a sourdough culture. 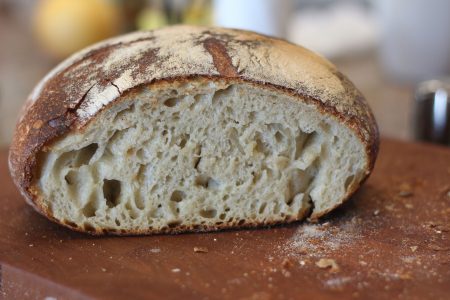 During the making of sourdough bread, complex carbohydrates are broken down into more digestible simple sugars, and protein is broken down into amino acids. Enzymes develop during rising. These enzymes are not lost while baking since the center of the loaf remains at a lower temperature than the crust. This fermentation, partly from lactobacillus, also allows for a bread that is lower on the glycemic index, thus making it better for those with blood sugar issues. The fermentation also helps restore the functioning of the digestive tract resulting in proper assimilation and elimination. There have been studies suggesting that sourdough bread results in more even glucose levels. In this study, the subjects’ blood glucose levels were found to be lower after eating white sourdough bread compared to whole wheat, whole wheat with barley, and plain white bread. The subjects tested after eating whole wheat bread that wasn't fermented fared the worst – with spiking blood glucose levels. 2,3

Better For Those With Gluten Intolerance 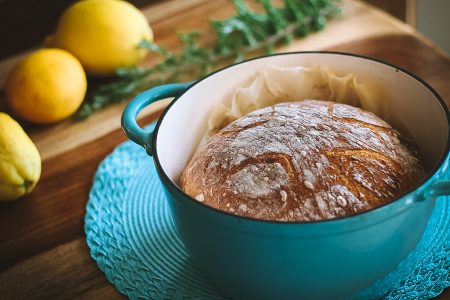 It was my daughter Maci's inability to digest wheat that started me on a journey learning about foods that were transformed through fermentation and when bread was made with a sourdough culture. People who came to my classes and website were experiencing the same results when eating bread that was made with sourdough cultures or sprouted. Even those who were gluten intolerant seemed to do really well. Now, not everybody who is gluten intolerant can handle it right away. They need to heal their guts first with cultured foods on a regular basis or try Einkorn sourdough which is missing the protein that is hard for those with difficulty handling gluten. After this occurs, I have seen so many people thrive when eating bread as long as these breads were fermented.

All wheat that we consume today is descended from Einkorn wheat which has about 14 chromosomes as compared to other kinds of wheat which have 28 to 42 chromosomes. This is important since some studies show that ancient wheat, with its fewer chromosomes, has lower levels of gliadins. Gliadins are proteins that can cause sensitivities in those who struggle with gluten. Einkorn does not contain this troublesome D genome (it only contains the A genome) and most testing for gluten intolerance is based on the D genome. And while einkorn does contain gluten, it is a different type of gluten that allows for easier digestion and nutrient absorption. It is also delicious and one of my favorite sourdough breads.

You can find out more about Einkorn Sourdough Bread here: 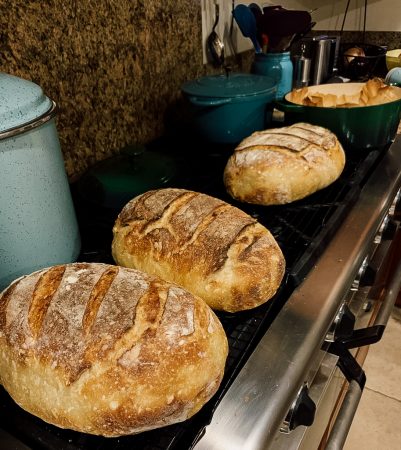 Sourdough bread has a very distinctive taste, mainly due to its lactic acid content produced by the bacteria during the fermentation process before baking.
This lactic acid bacteria not only preserves the bread but can also reduce mycotoxins. The sourdough process produces changes to the composition of the grain in numerous ways that make it a more beneficial food. Fermentation produces vitamin C and increases the content of vitamins B, B2, B5 and B6. Carotene, which is converted to vitamin A, increases dramatically – sometimes as much as eight-fold. Using a sourdough culture also inactivates aflatoxins which are toxins produced by fungus and are potent carcinogens found in grains. The microbial population during the fermentation period of bread making keeps evolving. In one study, it was found that the starter flours were initially contaminated with Gram-negative bacteria (which are more dangerous) Acinetobacter, Pantoea, Pseudomonas, Comamonas, Enterobacter, Erwinia, and Sphingomonas species. The abundance of these species varied with flour source. However, within one day of the fermentation process, the populations of most of those bacterial species were eliminated and were replaced with gram positive bacteria, represented by lactic acid bacteria, which was present initially at very low amount until fermentation took place. It was suggested that flour type also contributes to bacterial biodiversity. 4

The Flavor and Expression of You! 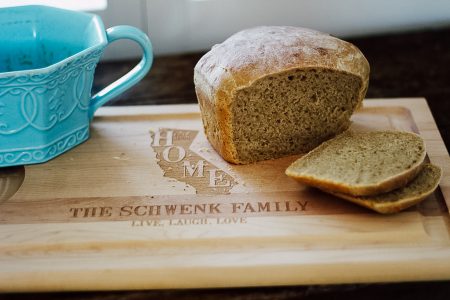 I love the flavor of my sourdough bread. My bread and sourdough starter are unique to me and the wild yeasts that live in my kitchen and on my hands. A wonderful study 5 done in the Belgian baking center took fifteen sourdough experts from around the world and fed them the exact same ingredients from a lab. Before the bakers could get their hands into the dough, they held them out to get a bacterial swabbing. And surprisingly the microbes found on bakers' hands, mirrored the microbes within their starters which is the soul of every loaf. Ecologist Rob Dunn stated, "It's a reminder that we have a really intimate relationship with our food. Not only do we impact the species in our food, but the species in our food impacts the species on or in our bodies."

Your sourdough starter will adapt to you and your kitchen and the organisms that surround you. This is the ultimate world of creation that I live in. Not only do I make and sell my cultures but they are truly a part of me. They will soon become a part of you and your home, and your bread will be a one-of-a-kind creation that only you can make. Just like San Francisco sourdough bread has a stronger, sharper, tangy flavor than most sourdough breads, the sourness comes from lactic and acetic acids produced by inevitable environmental bacteria in that area. They work on the flour's sugars along with the yeast changing the taste. Different bacteria make a different sour flavor. Don't you think that's cool? San Francisco is awash in local bacteria species that make its sourdough bread famous. Don't you want to find out what your bread is going taste like? Don't you love that it will literally be an expression of you! 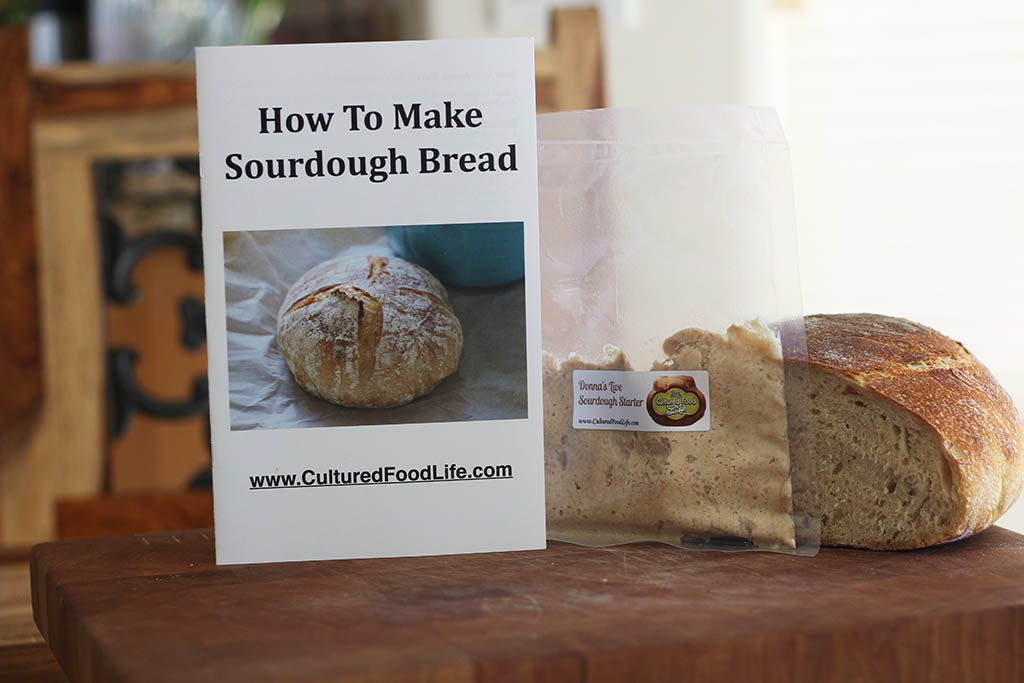 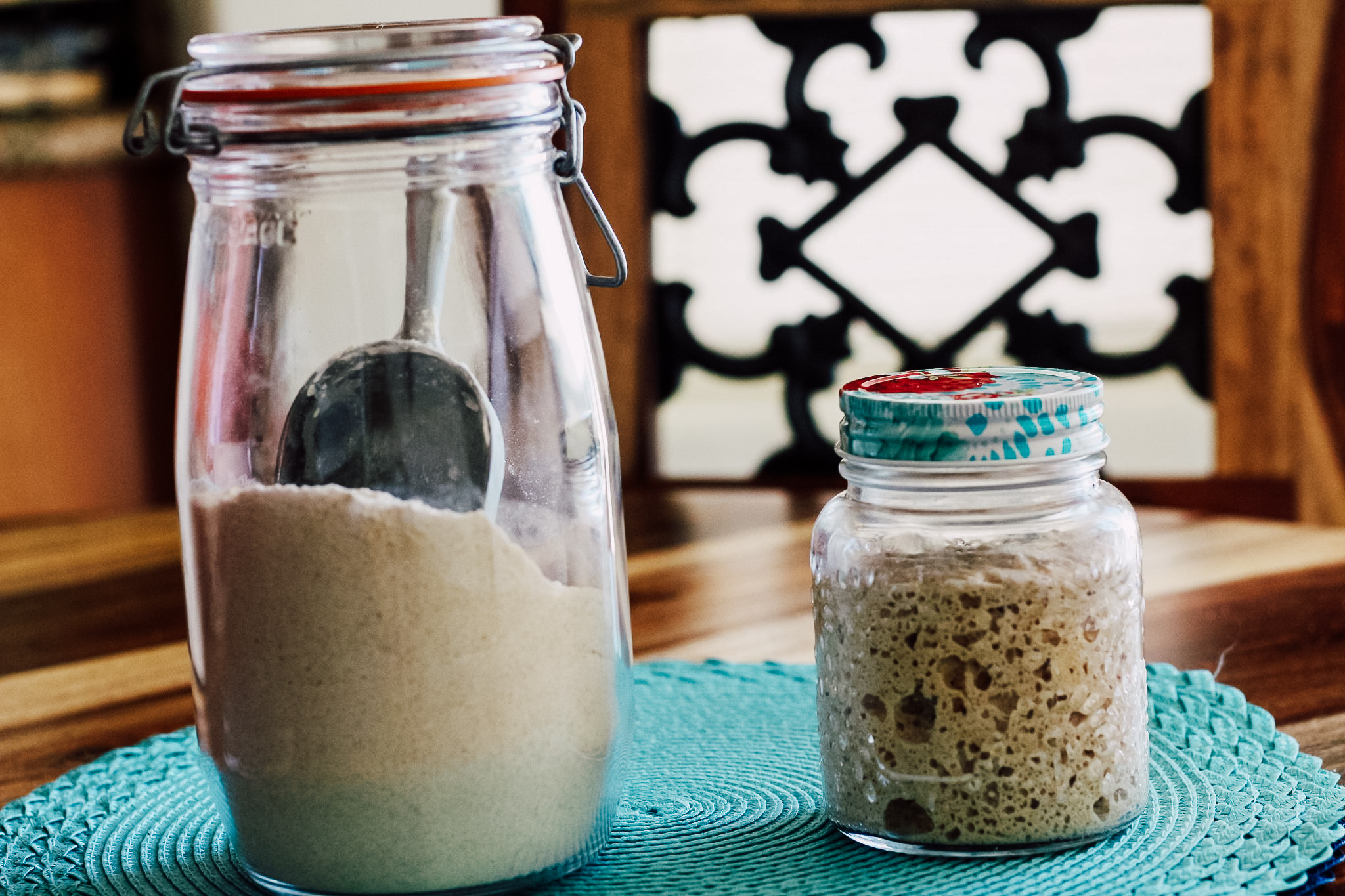 Caring for your Sourdough Starter 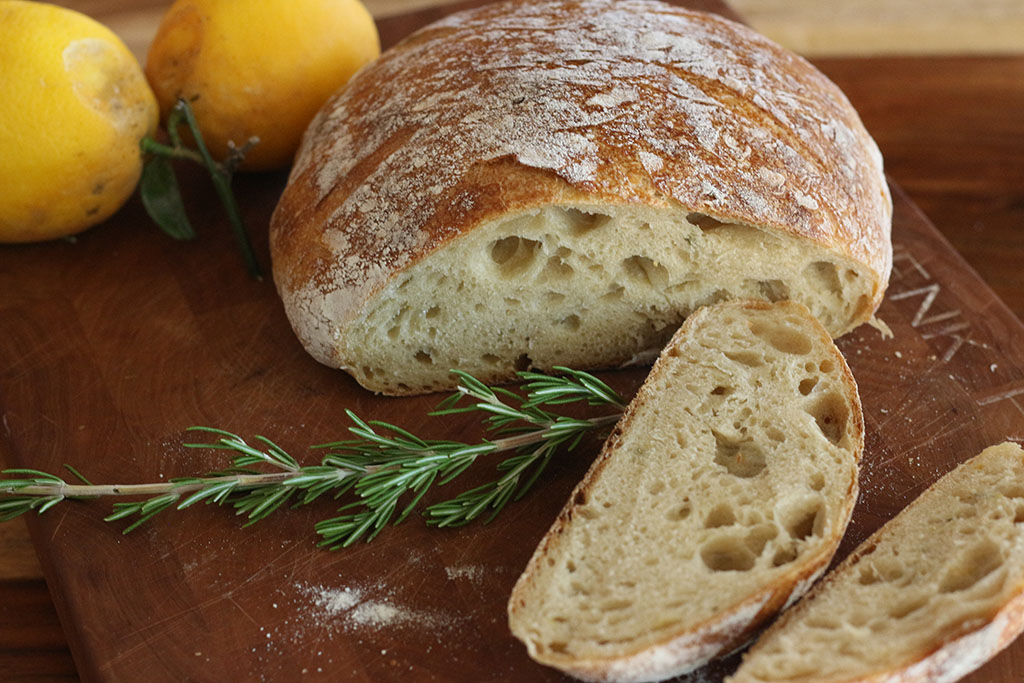 How to Make Sourdough 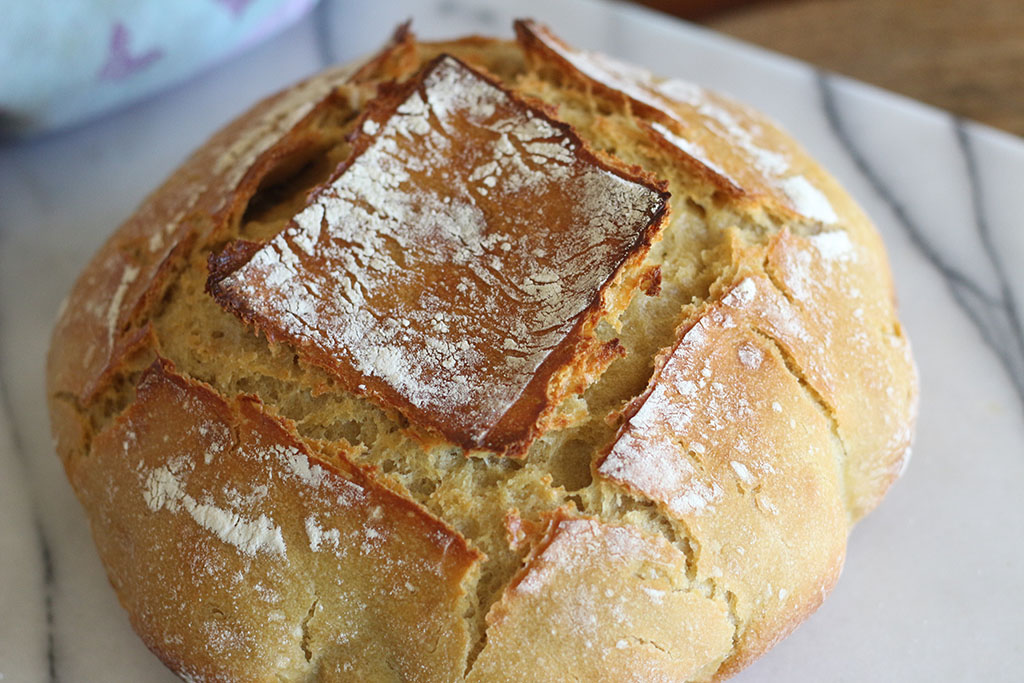 Listen To My Podcast

It took me a long time to discover why my daughter struggled with gluten. It also helped me discover that it wasn't the bread, but what we've done to the bread and our guts, that was wreaking such havoc on our lives. Listen to gain understanding as to why our bread can be better than ever before.