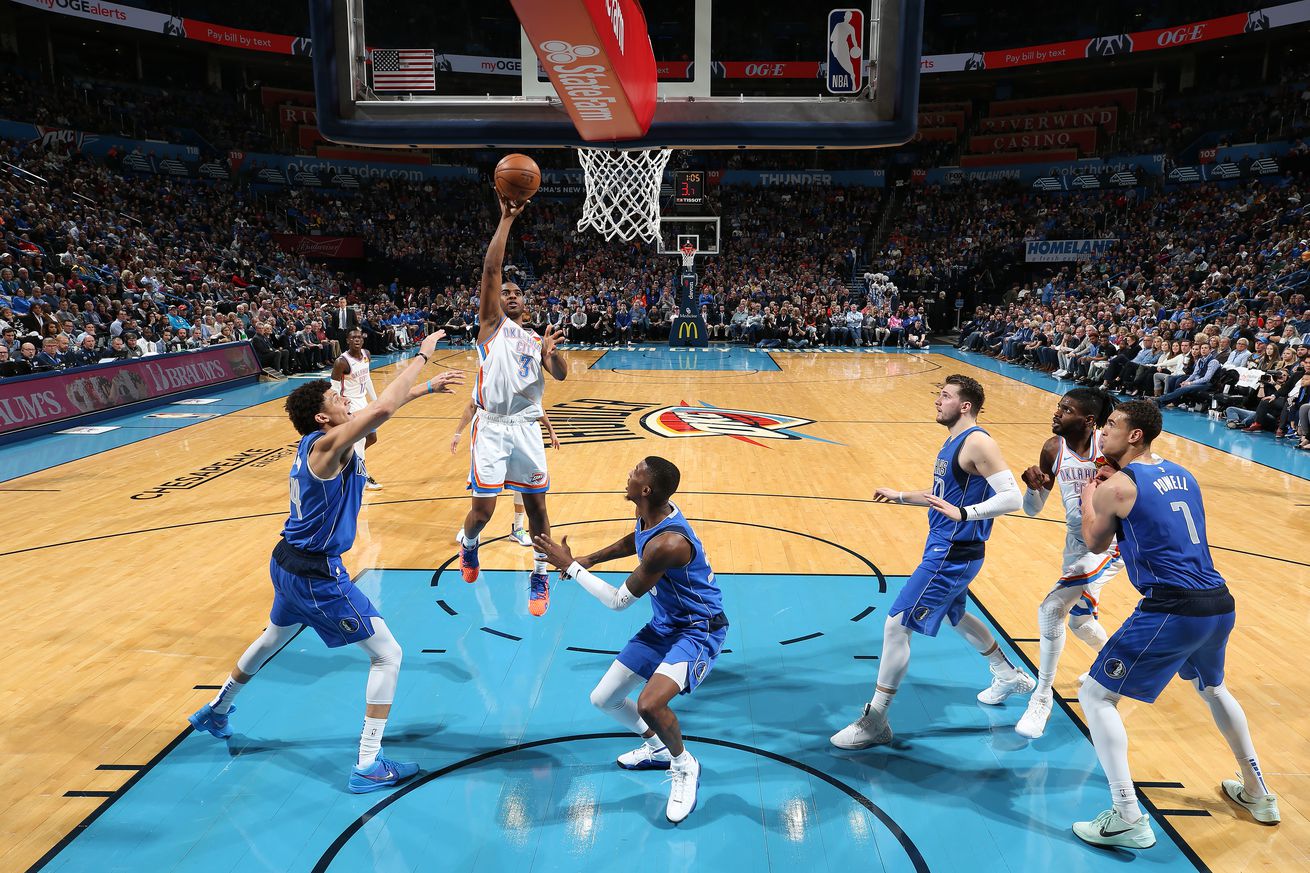 It seems like the Thunder only know how to play close games. OKC was able to escape with a home win against an improved Dallas Mavericks team. The Thunder have really learned how to close out games this season and tonight it was Chris Paul’s turn to play closer. Here are ten thoughts:

1) It was announced before this game that Danilo Gallinari, Dennis Schroder, and Hamidou Daillo would all return tonight from their injuries. Gallinari and Schroder played huge roles for this win while Diallo showed some rust after missing the last five weeks.

2) Danilo Gallinari started off slow but got better as the game progressed. Gallinari finished with 20 points on 8-14 shooting. But the biggest highlight in Gallinari’s return was on the defensive side when he poked the ball out of Doncic’s hands in a one point game with 24.1 seconds left. That steal led to Dennis Schroder going to the line and extending the lead to 104-101. The three point lead caused the Mavericks to look for a three instead of shooting the best shot. The next two possessions led to a pair of missed threes from Max Kleber and Doncic, with the latter miss being more luck as Doncic was left wide open from deep and clanked the three.

3) Dennis Schroder finished with 20 points on 7-17 shooting with four assists and seven rebounds. Schroder did a good job at defending Doncic late in the game, he was able to stay aggressive and stay in front of him for most match ups, but of course with a player like Doncic he’ll win most of his battles. Schroder helped keep the Thunder in the game in the first half with 14 points.

4) Another clutch fourth quarter for Chris Paul tonight. Up to the fourth quarter, Paul was having a quiet night with just six points and six assists. But in another close game, Paul stepped up as the main option for the team. Paul outscored the Mavericks himself 13-7 in the final five minutes to help seal the win.

5) Terrance Ferguson has been struggling to score lately and gets in foul trouble rather easily. Tonight that trend continued as Ferguson only played 18 minutes with five fouls and zero points. All five were called on him when he was defending Doncic. Billy Donovan noted that some of the calls he got were questionable. Regardless, Ferguson has scored zero points and has committed four or more fouls in four of his last five games. It seems like Ferguson has lost confidence in his shot recently. I’ve noticed that he just catches and shoots with no rhythm, he doesn’t seem to be setting his feet properly.

7) Steven Adams also had a double double with 10 points and 11 rebounds. That’s pretty good production considering Adams was in foul trouble all game long, only playing 25 minutes and finished with five fouls.

8) An underrated game for Nerlens Noel against his former team. Noel finished with a 12 point and 12 rebound double double that included a career high eight offensive rebounds. Noel also blocked two shots and provided a spark off the bench with Schroder.

9) After missing the last five weeks with an elbow injury, Hamidou Diallo made his return tonight and was, as expected, rusty. Diallo only played 19 minutes and scored just four points on 1-4 shooting. Diallo was having a great sophomore season until he got injured,

10) It felt like the Thunder did a good job at containing Luka Doncic in the second half after an explosive first half but he still up 35 points, seven assists and 10 rebounds. Doncic has been playing like a Top 3 Player this season. It’s surreal how big of a leap Doncic made this season by putting up MVP numbers already as a 20 year old. As we head into the 2020s, Doncic will be a player that will become a face for the NBA and the Mavericks. They got a good one there in Dallas.