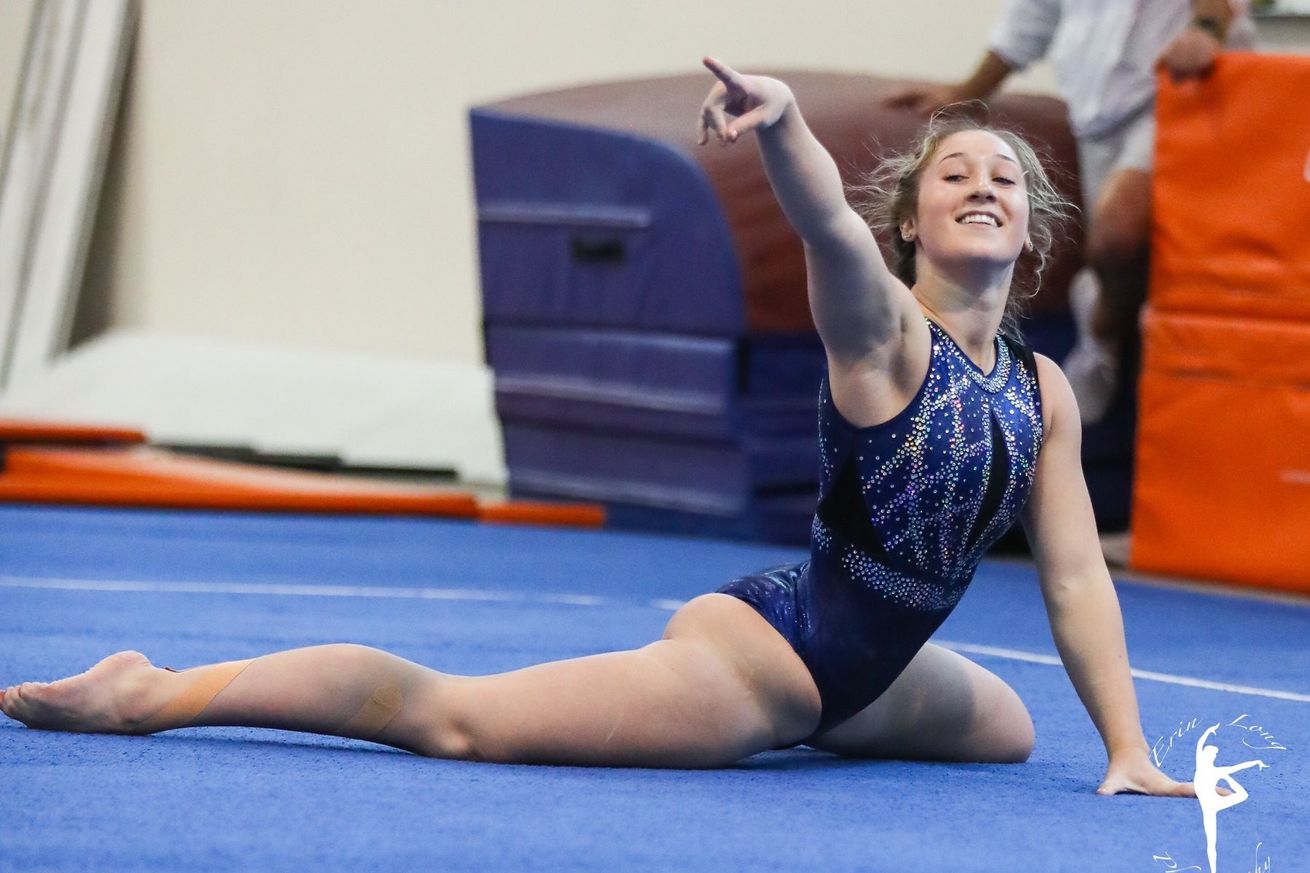 The Gators have unfinished business after an untimely NCAA Regional exit a year ago.

Last year’s Florida gymnastics season didn’t end the way anyone in the building wanted — nor the way most outside it expected.

This Friday, the Gators begin a campaign to get back to where they should be.

Later this evening, the Gators open their season with an SEC match-up against the Arkansas Razorbacks, which will double as the highly-anticipated debut of former Olympian Jordyn Wieber as the Razorbacks’ head coach. The Gators start their season ranked third in the preseason poll, despite the disappointing conclusion to the 2019 season — Florida missed out on a team bid to Nationals after a rough beam rotation at the Corvallis Regional, leaving the Gators ranked 10th to end the year after spending the entirety of it leading up to that competition in the top five.

The Razorbacks enter 2020 at No. 19 nationally despite accruing a 1-7 record a year ago, testament to the depth of the SEC — where Arkansas took all of its losses.

Despite their stumbles on the beam out west, four Gators — Alicia Boren, Trinity Thomas, Savannah Schoenherr, and Alyssa Baumann — traveled to the NCAA Championships as individuals, where Boren earned a well-deserved NCAA title on the floor exercise. And Boren and walk-on Amanda Cheney — who will commentate Friday’s meet — were the lone seniors Florida graduated in 2019, leaving Boren’s four lineup spots as the only holes for Jenny Rowland to fill in her lineup this season.

Logically, those spots will go to returnees, given that the 2020 Gators bring in small freshman class of only one athlete, Payton Richards. But Richards trained at Aerials Gymnastics Club in Illinois and is a three-time Junior Olympic (JO) Level 10 National Champion (all-around 2016, balance beam 2016 and 2017), and a nine-time JO Level 10 top-four finisher, with top-four finishes across all four apparatus. She won four consecutive Illinois State Level 10 all-around titles, and claimed numerous state champion and runner-up titles from 2017-2019. She was also named to the 2017, 2018, and 2019 Region 5 All-Star Team.

Though she comprises just the third one-woman recruiting class in program history, Richards can contribute across all four events, and should be a great addition to the team immediately.

And while Richards doesn’t factor into the first of the two major story lines for Florida coming into the 2020 season — obviously, she wasn’t part of the unfortunate ending of the 2019 season — she will figure into Florida’s depth across all four of the events, as the Gators come into the year with eight athletes capable of performing competition-ready routines. Practices will very likely become battles to make lineups this season, and I think that we will probably see a variety of lineups at the beginning of the season as the coaches test out which athletes will perform the best in a competition setting.

Let’s talk about who the possible athletes are on each event.

Last year, vault was the weakest event for the Gators, but they still ended the season ranked eighth on the event with an National Qualifying Score (NQS) of 49.235. Florida returns three athletes with an NQS on vault this season: Sophomores Trinity Thomas (9.9), Nya Reed (9.86), and Savannah Schoenherr (9.84). Those three should for sure be in the lineup.

Junior Alyssa Baumann competed three times for the Gators on vault last season, with a peak score of 9.875, but didn’t make the final competitive lineup. In preseason videos, it appears like Baumann’s Yurchenko 1.5 is looking much stronger and she should join this group. Richards is also coming in with a strong 1.5Y, which we should expect to see in the back half of the lineup.

The sixth spot will probably be filled with a clean Yurchenko full. The best options from last season were Senior Sierra Alexander (peak 9.875) and Junior Megan Skaggs (peak 9.875), who both made the final lineup in 2019. Redshirt Sophomore Jazzy Foberg had a strong Yfull in 2018 (RQS 9.85) and could make this lineup if she is healthy. Senior Maegan Chant also has a Tzukahara full (10.0 start value) that has made the lineup before.

Bars was a strong event for the Gators in 2019, and I expect it will continue to be strong this year — and in every year Thomas is part of Florida’s bars rotation.

In final NQS rankings, the Gators were third on bars last season, and they tied Oklahoma for the highest bars total posted all season (49.725). The Gators are returning an incredibly strong group on bars, with four returning athletes posting a 2019 NQS of 9.9 or greater: Schoenherr (9.9), Senior Amelia Hundley (9.91), Skaggs (9.925), and Thomas (9.95). Senior Rachel Gowey will also be returning with a 2019 NQS of 9.825 — a deceptively low score, because she was out for a chunk of the season with an injury and didn’t get to put up as many routines over the course of the year. That group of five should be very strong again.

For the sixth spot, there are a few options. Richards comes in with a strong routine (she scored a 9.8 in JO last season), Baumann has also been training on bars again and was strong at the intrasquad, Foberg made the postseason lineup in 2018, and sophomore Leah Clapper has been working on her bars as well. My expectation is that we will see Richards at the beginning of the season.

There are several other athletes vying for a chance in this lineup. Richards comes in with two JO Level 10 national titles on the event and a fantastic triple series, which should definitely see some time on the event. Clapper stepped in for five routines last season and scored a 9.875 four times, so she is definitely in contention for a recurring lineup spot. Sophomore Sydney Johnson-Scharpf has also been seen training a strong beam set, and I think that we could see her here as well.

Florida also finished ranked third on floor last season, but may not find as easy to transition here as elsewhere, as many expect this will be the event where Florida is hurting the most after losing Boren. While Boren’s 9.975s were the product of a thrilling and athletic routine in 2019, and may be a challenge to replace, I think that there are many athletes who can step up this season on the floor.

Rowland recently said that there are 13 athletes with full floor routines this season, so there is no shortage of talent here in her eyes. And, indeed, the Gators return three athletes with a 2019 NQS in the top 25: Baumann (9.92), Reed, (9.92), and Thomas (9.965). Hundley also returns with an NQS of 9.875. Skaggs (peak 9.9), Gowey (peak 9.9), Schoenherr (peak 9.85), and Johnson-Scharpf (peak 9.8) all made lineups last season, and could definitely do so again. Richards also comes in with a two-pass routine featuring a huge double layout.

I think that any of these athletes could make the lineup this season, and I expect that we will see some week to week shuffling as the coaches determine the highest scoring lineup. Florida volunteer assistant coach Jeremy Miranda really outdid himself with the choreography this season, so I cannot wait to see all of the full routines.

Friday’s debut in the O’Connell Center will give us our first look at the 2020 Gators who are sure to be hungry for a better postseason. If I had to pick one routine for each event that I am most excited to see, it would be the following: Richards on vault, Schoenherr on bars, Gowey on beam, and Hundley on floor. Keep an eye out for those if you tune in tonight.