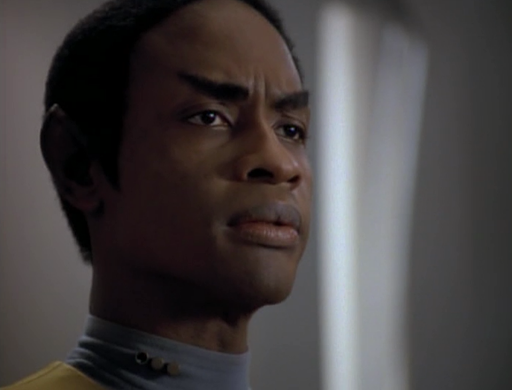 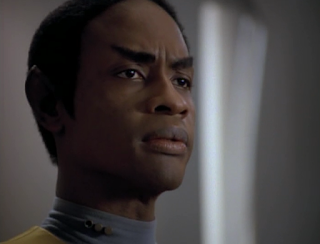 Plot – Janeway has the phrase beware Greeks bearing gifts in the back of her head when Voyager encounters a world where it is their default setting to provide pleasure (in whatever form that takes) to whoever visits. Someone beam me onto that world please. I’ll take a trip to Alastria while you’re at it and experience the passion winds. Any planet that’s environment gives you the sensation of a really great orgasm when it shifts is first on my list of ‘to visit.’

Hoist by your own Petard! How utterly delightful to see a Federation ship suffer the same ignominy as they have bestowed on other races across the years by meeting a race that refuses to share their technology with them. In Voyager’s case this is particularly ironic given their situation stranded in the Delta Quadrant. This is a delicious turn of events. Later episodes of Voyager would see them on the other side of this debate, refusing to share what they have with the Kazon. This is a fascinating spin on the way these things usually go and the drama that unfolds because of it pushes Prime Factors way above the majority of the other first season episodes. ‘I’m sure many of them think that the Prime Directive is a lousy idea’ says Janeway of the races they have waved at and left to their conflict.

How the episode encourages the Federation and Maquis to work together to betray Janeway and acquire the technology is really suspenseful, simply because you know at some point they are going to get caught and this whole subterfuge is going to come crashing down on their heads. I really like how the prize of getting home is so enticing (and completely understandable) that people are willing to throw away their principles in order to make it happen. It’s a quandary I would have loved to have seen explored much more in every season of this show. It’s distinctly, instinctively Voyager.

This is such a generous world and they want the crew to stay as long as possible. I’m surprised that the possibility of settling here was never considered.

Character – I forget that during its first two seasons that Michael Piller pushed for some arcs on Voyager and the sight of Seska in her Bajoran disguise chatting away to Torres about men took me completely by surprise. She’s the most vivid character on this show in the first two seasons by a country mile, the one who generates a whole plot thread independent of the ship around her, who gets under the skin of several of the Voyager crew and who loves to indulge in cheap pot-shots and crazy soap opera style twists. Seska is brilliant fun and the sort of villain this show was crying out for long term rather than someone who was cut off in her prime. This is long before any of her betrayals but Prime Factors sets up how far she is willing to go in order to get home. It’s a fascinating prelude to her duplicity which is just around the corner, and adds much to her motive when that moment comes.

I’m not going to suggest that Harry Kim is the world’s most startling romantic but it is pleasant to see him getting some focus and getting the girl, both of which are usually Tom Paris’ forte. I swing between frustration (because he is simply too plain to care about at times) and frustration (because those moments when they push him out of his comfort zone – The Chute, Timeless – he is far more palatable) and ultimately Harry remains the most egregious example of stalling character growth on this show. In Prime Factors he’s the wide-eyed boy in love and that is used to fair effect. And count the amount of times that I say Harry Kim is used to fair effect.

Janeway is seconds away from getting her end away with Labin before Harry interrupts. And she’s the last man standing of her away crew well into the dead of night. She’s my kind of gal. Janeway rarely lets her hair down like this over the shows run and it’s a shame because she’s so likable when she does. ‘How do I tell them that my Principles are so important?’ she asks later, wondering how she can cling onto the Prime Directive in this situation when there is an opportunity to cut half the time off their journey.

Early Torres is a much more interesting character than she would become later because she is still torn between her loyalty to the Maquis and her clear infatuation with her role as Chief Engineer and her relationship with Janeway. This episode takes a brief look at that where she is willing to make some dangerous moves for her former colleagues (Seska can be very persuasive) and how torn she is because it shits all over her respect for Janeway and how it comprises her position on the ship. Her best moment comes when she refuses to cover up what they have done and accept the consequences of their actions. That’s a mature move and one that shows despite her impulsiveness, she’s growing as a character. Seska says that she has changed liker it’s an insult, but Torres takes it as a compliment.

What happened to these brilliant scenes between Janeway and Tuvok later on in this shows run? When Seven is brought in the focus is almost exclusively on her and Janeway, which is a shame because this episode proves what an asset this relationship is to the show. I’m not kidding when I say that this is probably the best Tuvok episode of the entire run (I would put a strong case in for Meld from season two as well) because it uses him an entirely surprising and shocking manner that exposes that a Vulcan can truly do the unexpected when it comes to friendship, even betrayal. His feeling for Janeway and her struggle is enough for him to make bad choices on her behalf. It’s entirely logical and completely illogical.

Performance – Many performances in Trek can disappear into obscurity simply because a lot of them can be humourless and efficient and slightly unmemorable and so it is a delight when somebody like Ronald Guttman as Labin who has the even more difficult job of playing an entirely benign character and manages to do so with real charm and warmth. I remember this episode for a multitude of reasons but one of those reasons is because Guttman is such a delight to watch. His line delivery is slightly unusual and he appears to be drunk half the time, but he’s witty and generous and great fun to be around. Janeway certainly thinks so.

Production – 90s Trek has this wonderful habit of creating these interior exterior locations, that is a set that is designed to represent a planet with a bustling atmosphere and activity. TNG was notorious for it and DS9 and Voyager are not immune. There’s something very theatrical about the whole affair, with the plot and the actors having to do a lot of the work to make this planet come alive by acting as though it is a busy thoroughfare and not a corner of the studio that’s cheaply designed to replicate visiting another world. Some episodes put in more effort than others with set dressing, lighting and so on (DS9’s Children of Time is a great example) but I swear they are using the same set slightly rejiggled each time they do it.

Is it my imagination or does Chakotay have a touch of grey around the temples in early Voyager? It suits him very much and I wonder why they dropped it. Robert Beltran is a naturally handsome man and dying his hair takes away some of that natural beauty.

Best moment – I really enjoy how the episode refuses to inject any false tension between Janeway and Labin even when they are at opposing ends of an argument. Even when talking about restrictions and bartering they are flirting outrageously with one another.

How delightful that there is the equivalent of a drug dealer of stories on this world. The black market of ideas…

Janeway literally cannot believe her ears when Tuvok admits he was the senior officer involved in this conspiracy. The scene that follows in one of the best in Star Trek’s entire run when it comes to pure acting. Kate Mulgrew’s quiet, understated rage and disappointment comes off the screen in waves. I was holding my breath throughout. My one regret with this scene (and it is very minor) is that there is no hint that this was a selfish decision on Tuvok’s part and that he personally wanted to get home too.

Worst moment – Trust Harry to forgo the pleasures of the orgasmic winds of Alastria because he thinks he has a way back home. I’d enjoy one and then deal with the other. Also trust Harry to be the number one proponent of the Prime Directive.

Surely offering an entire library of stories to these people is potentially even more damaging than dishing out technology. Ideas and ideology are powerful and could be a hugely corrupting influence on this Quadrant.

I wish they hadn’t done that – Janeway comments that the Maquis and the Federation crews are finally getting along but let’s be honest about the fact that there was never any real tension between them. It was more of a case of: we’re on opposing sides, we’re stranded in the Delta Quadrant, we work together. The angle this show could have taken was to have a far greater division, far more tension between the crews and perhaps even an outright mutiny. Voyager had a golden premise for drama in that respect and it indulged in the latent drama of it about four times in its whole run. Check out Alliances in season two to see how this could have played out long term and weep when the conflict pretty much comes to an end at that point. It takes introducing a Borg character to instil some struggle into this crew after that point.

A reason to watch this episode again – What I really enjoy about Prime Factors is how it starts out like TNG-lite like so many episodes of Voyager and then halfway through it twists to become the rarest of things…an episode that could only take place on this show with this premise and this desire to get home. Should anyone have still needed convincing at this point then Kate Mulgrew knocks it out of the park with Prime Factors, showing many facets to Janeway. Everything from indulging in sensual pleasures, flirting, diplomacy, investigation and finally one of her best ever dressings down of an officer. Janeway is fully realised from season one and Mulgrew delivers some of her most impressive work here. Out of a whole list of examples, this might be my favourite of all the Prime Directive episodes because for once it trips the Federation up and forces characters you wouldn’t imagine to make some unusual choices. On that level alone this is a huge winner but it has so much more than that to recommend it. 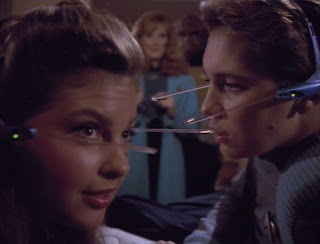