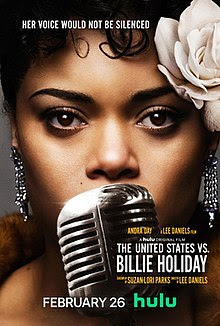 “The United States vs. Billie Holiday” was a riveting look into one of the earliest jazz divas in music history especially during the 1950’s. The movie is based on a chapter of the book entitled, “Chasing the Scream" by Johann Hari.
Billie Holiday was an African-American singer known for a behind the beat style of singing and bending the melody just enough to add drama and poignancy to the lyrics. Her subtle improvisations proved that delivery of lyrics was just as important as mind bending scat singing or heroic leaps between intervals and octaves.
Watch a trailer of the film by clicking here
Actress/singer Andra Day portrayed Billie Holiday in a tell all no holds barred script. I was drawn into the reenactment of childhood trauma, abusive relationships, steamy sex scenes, drug scenes and the injustice of being hunted by the government.
All of these scenarios help me understand why her singing at times imbued such happiness and heartache depending on what was going on in her life at the time. Most of the movie takes place during the 1950’s.
Andra Day’s singing and acting was almost like the spirit of “Lady Day” had taken over this talented singer and now a Golden Globe Winner/Actress (her portrayal of Billie Holiday won Golden Globe Best Actress for 2020 on February 28).
One of the most poignant moments in the movie is Andra Day singing about, “black bodies hanging from the poplar trees and blood on the leaves.” “Strange Fruit” was one of the earliest anti-lynching protest songs that ‘Lady Day” refused to stop singing throughout the United States even after being pressured by the FBI.
Her addiction to drugs added more hounds on the trail which ultimately led to her demise. They used her addiction and their war on drugs to deflect the government’s dislike of her performing “Strange Fruit,” written by American songwriter and poet Abel Meeropol (Lewis Allan).
This movie has some embellishments but features other great costars like Leslie Jordan and Trevante Rhodes to make this movie an entertaining watch.
I love the brutal honesty of this screenplay. It is raw and unfiltered and not for the timid viewer.
If you have not listened to Andra Day sing (check out Day's video for "Rise Up"),  this movie gives you a great opportunity to hear a great young talent. The movie soundtrack alone will draw you even deeper into the world of “Lady Day.”
Many times greatness is fueled by tragedy.