Good friends recommend good books. And that makes John DeNardo just about the best friend we have in this business. I’ve come to rely on his regular columns for Kirkus Reviews to point me towards the best new releases each month, in articles like “Sex Robots, the Future of Racism, and Cthulhu Vacations” [Jan 21] and “The Definitive List of the Top Science Fiction & Fantasy of 2019” [Dec 2019].

He also does regular monthly round-ups of the best novels — while not neglecting short fiction, which is one of the things I like about him. For March he looks at new novels by Katie M. Flynn, K. B. Wagers, Myke Cole (Sixteenth Watch), TJ Klune, N. K. Jemisin (The City We Became), Zack Jordan, and Menna van Praag, and new short fiction and collections from Tor (including Dragon Age: Tevinter Nights, and Hearts of Oak by Eddie Robson), Titan Books (including Cursed edited by Marie O’Regan and Paul Kane), Undertow Publications, the British Library, and Black Library, not to mention James P. Blaylock, Ellen Datlow and Terri Windling, and many others.

As always, there’s plenty of great stuff on John’s list. Here’s a few of the highlights.

WHAT IT’S ABOUT: In the 25th century, the space around Earth is protected by a military force known as Near-Earth Orbital Guard (NeoG). The crew of the NeoG ship Zuma’s Ghost, preparing to compete in a military game competition, suffers the reassignment of their best swordsman. Replacing him is Maxine Carmichael, a lieutenant trying to escape the influence of her powerful family. In addition to earning the trust of her new team, Maxine must also contend with a routine mission gone horribly wrong — one that leads to members of her team being killed.

WHY YOU MIGHT LIKE IT: This space adventure is a departure from other military science fiction entries that depict grim futures and endless warfare.

We discussed The Farian War series by K. B. Wagers right here back in December.

WHAT IT’S ABOUT: Linus Baker is a by-the-book caseworker in the Department in Charge of Magical Youth. He’s sent to an orphanage for magical children on a remote island to observe six dangerous youngsters who could bring about the end of the world. Arthur, who runs the orphanage, makes it clear to the rules-loving bureaucrat that he will do everything in his power to provide the children with a safe home on the island, even if it means defying a system that treats those who are different as second-class citizens.

WHY YOU MIGHT LIKE IT: This contemporary fantasy makes its themes of complacency and fighting for family more accessible by keeping the tone light.

Is that an awesome cover, or what?? TJ Klune is also the author of the Green Creek trilogy, The Lightning-Struck Heart, and Tell Me It’s Real. Read the first chapter of The House in the Cerulean Sea here.

For more than thirty years, James P. Blaylock has enthralled and delighted readers with a series of stories, novels and novellas featuring Langdon St. Ives, adventurer, man of science, Victorian gentleman. The best of these, such as Beneath London, Lord Kelvin’s Machine, and The Aylesford Skull are among the most stylish, consistently witty entertainments of recent years. The Gobblin’ Society, the latest episode in St. Ives’s colorful career, belongs very much in that company. The story begins with an inheritance. Following a protracted legal battle, Alice St. Ives, Langdon’s wife, has come into full possession of Seaward, the house left to her by her late Uncle Godfrey, a man with a number of bizarre proclivities. Heartened by this good fortune, Alice, Langdon and their surrogate son Finn prepare to take possession of the house. From this point forward, events spin out of control, taking on a madcap logic of their own that is exhilarating and — in typical Blaylock fashion — often quite funny. What follows is, in a sense, a tale of two houses. The first, of course, is Seaward, a “rambling, eccentric old house” with it its history, its secrets, its priceless accumulation of volumes of arcane lore. The other is a neighboring house known, for good reasons, as “Gobblin’ Manor,” home base of The Gobblin’ Society, a “culinary establishment” with its own peculiar — and very dark — traditions. In the course of an event filled few days, St. Ives and his cohorts will encounter smuggling, mesmerism, kidnapping, cannibalism and murder. It is, in other words, a typical — and typically eccentric — Langdon St. Ives adventure. Like its predecessors, this latest extravaganza is fast-paced, unpredictable, and a thorough delight to read. Few novelists evoke the essence of Victorian England as successfully as Blaylock. Fewer still bring such wit, style, and propulsive narrative talents to the task. In The Gobblin’ Society, Blaylock has given vibrant new life to one of his signature creations. The result is a gift both for Blaylock’s longtime fans, and for newcomers lucky enough to come along for this astonishing — and thoroughly enjoyable — ride.

Get the complete details here. 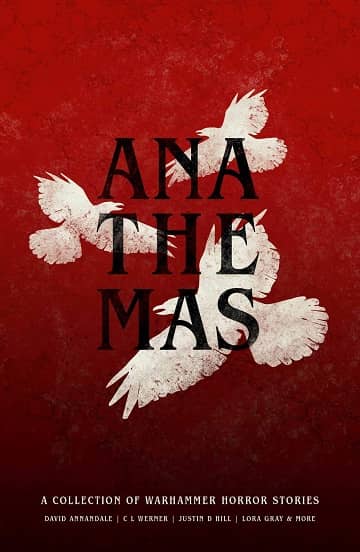 Anathemas is the third Warhammer Horror anthology, featuring more twisted and razor-sharp tales set in the 41st Millennium and the Mortal Realms. Unexplained deaths terrify the crew of an ancient Astra Militarum tank; a strange instrument beguiles its audience with a deadly melody; a man fears for his sanity within a plague-riddled hive… This grim collection of unspeakable cosmic horrors and arcane menaces unveils the subtle darkness that lurks within the souls of mankind and the sinister forces tormenting them. Spawned by some of Black Library’s most depraved minds including David Annandale, C L Werner and Darius Hinks, the anthology also introduces new writers, Jake Ozga, Lora Gray and Richard Strachan.

See all our coverage of the best new book releases here.