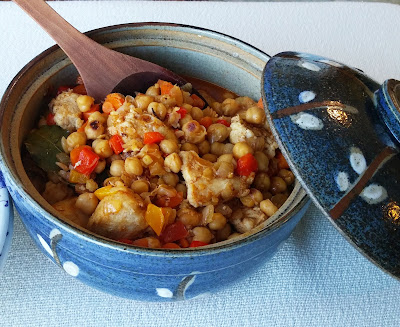 Greenhouse peppers at this time of year; but keep this dish in mind for late summer and early fall as well. Really, this is something I would happily eat all year long, as long as I could get the peppers.
I know I usually refer to them as chick peas, but this dish is so distinctly Spanish, it's going to have to be garbanzos. I also have to say that if you have an Instant Pot, there is no reason not to be cooking beans from dried. If you really have to use canned beans, though, you will need 2 cans.
There was none around at the moment, but a little parsley on top would have been ideal.
4 servings
1 hour 15 minutes - 40 minutes prep time
NOT including cooking the chick peas

1 1/3 cups raw chick peas
OR 3 1/2 cups cooked chick peas
1 medium onion
1 to 3 cloves of garlic
1/2 large red bell pepper
1/2 large orange bell pepper
1/2 large yellow bell pepper
2 tablespoons olive oil
2 or 3 bay leaves
1/2 teaspoon salt
1 teaspoon cumin seed
2 teaspoons sweet OR smoked Spanish paprika
freshly ground black pepper to taste
2 cups chicken stock
1/4 cup white wine vinegar
600 grams (1.5 pounds) chicken pieces
1/4 cup barley OR wheat flour
salt & pepper to taste
2 tablespoons olive oil
Cook the chick peas by putting them into a pot and covering them generously with water; bring to a boil, then turn it off and cover them. Let them soak for one to several hours.
Drain the chick peas and either return them to the pot and re-cover with plenty of water and a teaspoon of salt then boil them gently until tender, or cook them in the Instant Pot - I give them 8 to 10 minutes with natural release. If cooked on the stove top, they will need 1 to 2 hours.
When you are ready to start the stew, peel and chop the onion. Peel and mince the garlic. Wash, core, and chop the peppers into dice a little larger than a cooked chick pea.
Heat the oil in a heavy-bottomed soup pot over medium heat. Add the onion and peppers and cook for about 10 minutes, stirring regularly, until softened and reduced. Add the seasonings and mix in well, then the chicken stock and vinegar. Let this mixture simmer while you prepare the chicken to be added.
Coat the chicken in the flour, into which the salt and pepper have been mixed. Heat the oil in a large skillet over medium-high heat, and fry the chicken on all sides until nicely browned. Add the pieces to the pot of chick peas. Use a little of the cooking broth to de-glaze the skillet, and add it back into the stew.
Simmer for 15 to 30 minutes, until the chicken is well done and everything is thick and stewish. Rest for 5 minutes, then serve.
Last year at this time I made Strawberry Sponge Pudding.
Source: seasonalontariofood