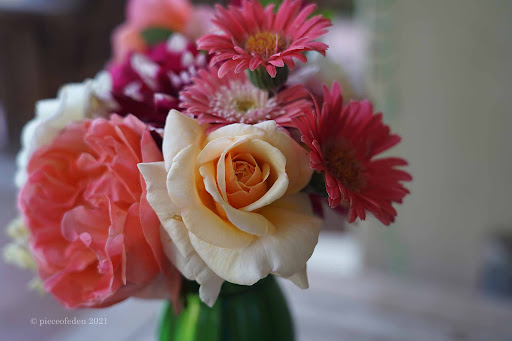 Garden is The Gardener, Gardener is the Garden 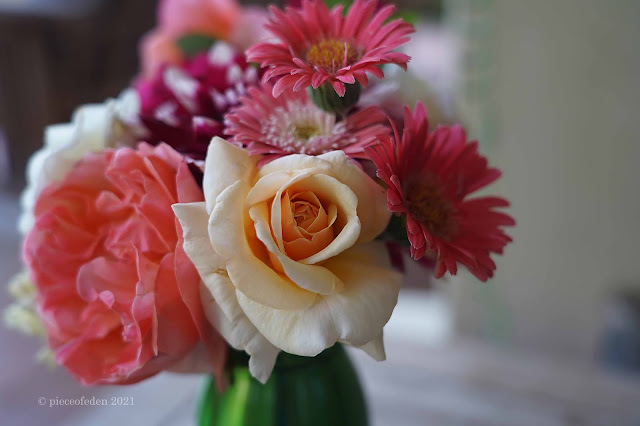 The garden is the gardener, and the gardener is the garden:  we're both struggling, waiting out the heat, waiting for cooler weather.  It's been 90F (33 C) or hotter since last Thursday, so nothing much gardening related is happening.

Last week, the guy who clears out the drainage culvert in the back dug out the dead Pittosporum stump.  What took him ten minutes would have taken me days.

The base of the Pitto was rotted: 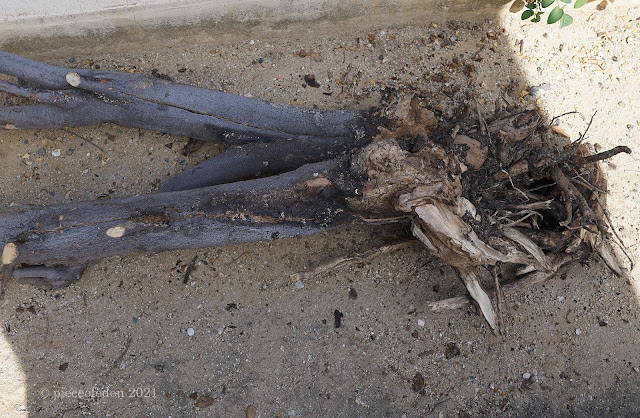 Here's where a new shrub needs to go: 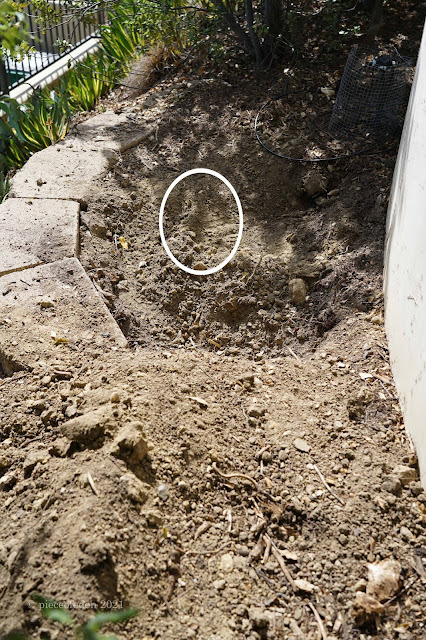 The plan is to plant Leucadendron 'Chief' there.  If it ever cools off.  'Chief' in its pot is currently tucked between other plants to protect its roots from heat: 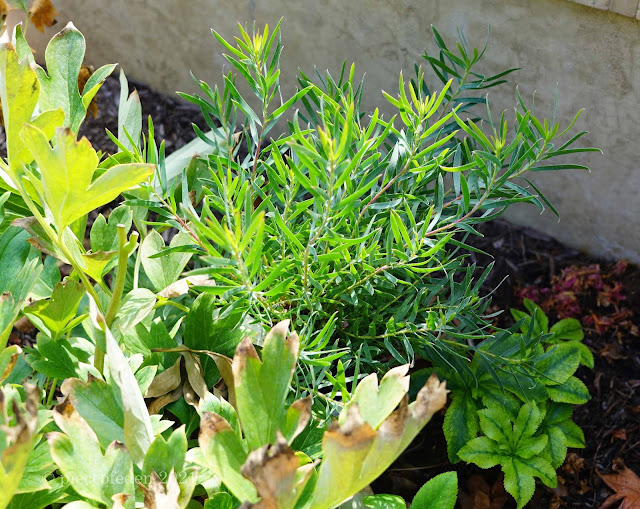 The intent is that  'Chief' will screen the neighbor's bathroom window from our balcony: 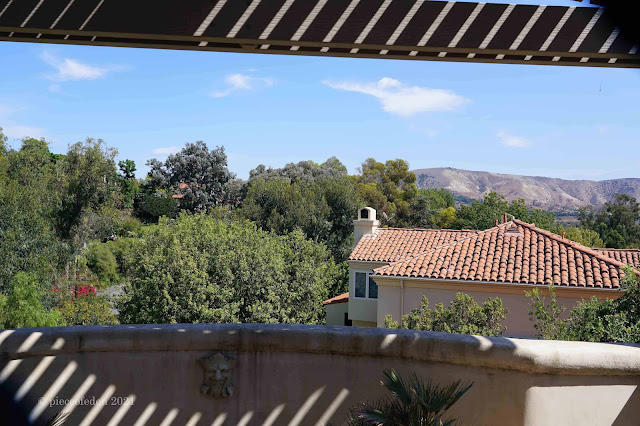 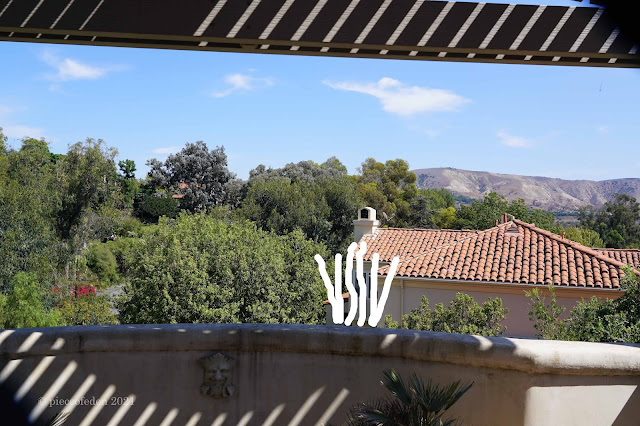 The Pittosporum was just starting to do that, then it died.
What else is going on?   I stuffed some flowers in a water bottle, because left on their plants, 90F heat quickly fries flowers. 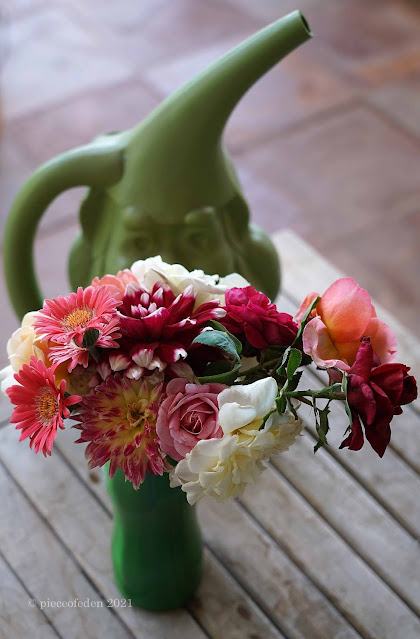 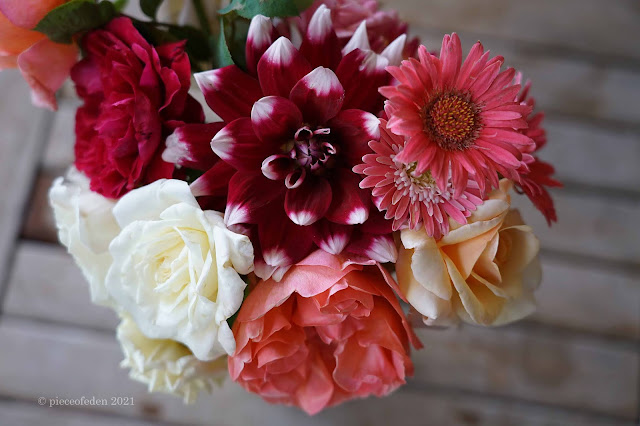 The orange-pink rose rose is 'Sweet Madamoiselle', which has been slow to establish: 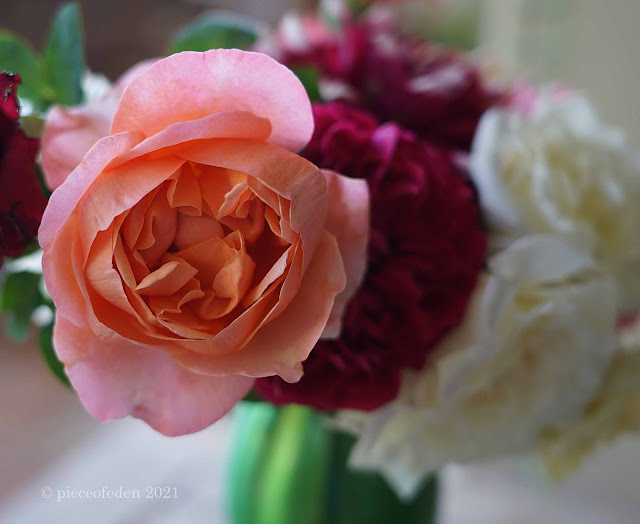 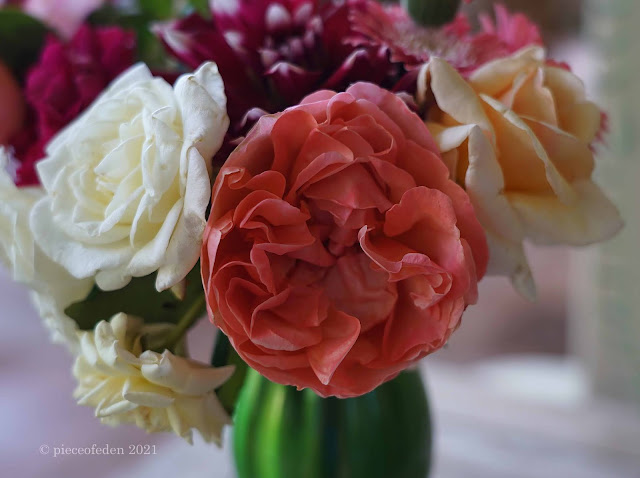 What else?  Grim news on the 'Reed' Avocado.  For the first time since its planting ten years ago, this summer it produced a significant crop of luscious fruit, each weighing nearly a pound (453 grams).

Not only luscious, but a lot of luscious: 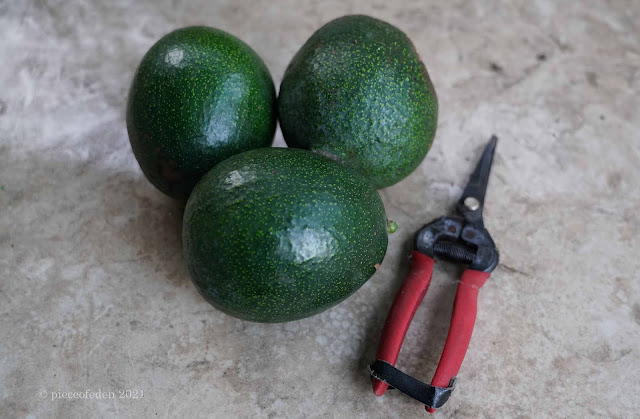 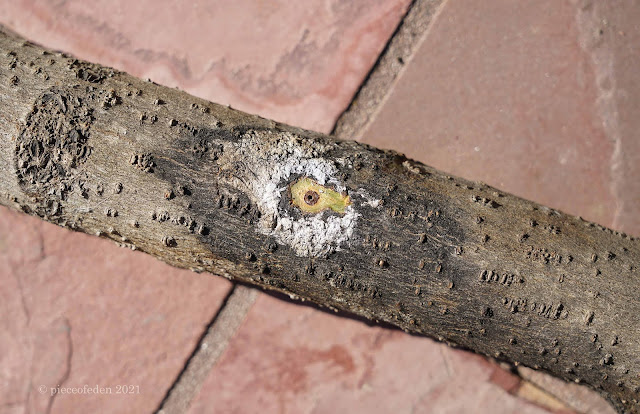 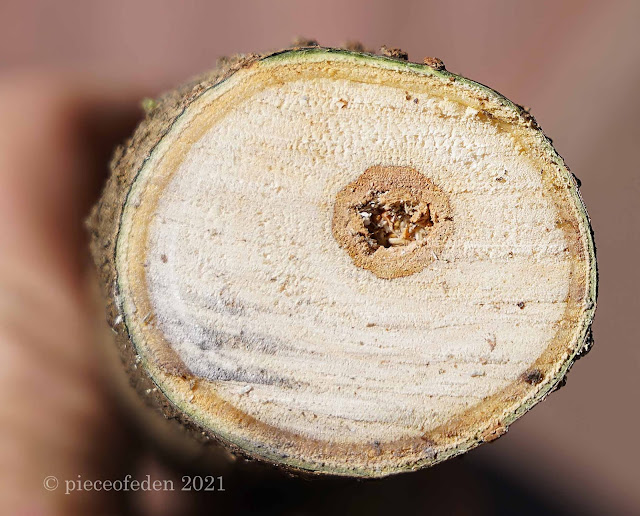 There was only one instance of borer damage, but still, this is bad.  I cut the damaged branch off.  We'll see what happens next.

Moving on...too plants still wait to be planted.  Just one made it into the soil so far.  Salvia 'Celestial Blue',  a hybrid of native S. clevelandii and S. pachyphylla, got the spot of Leucospermum 'Flame Giant', which root inspection seemed to indicate, died of insufficient water.  Rodents bit through 'Flame Giant's dripper tubes, cutting off its irrigation. 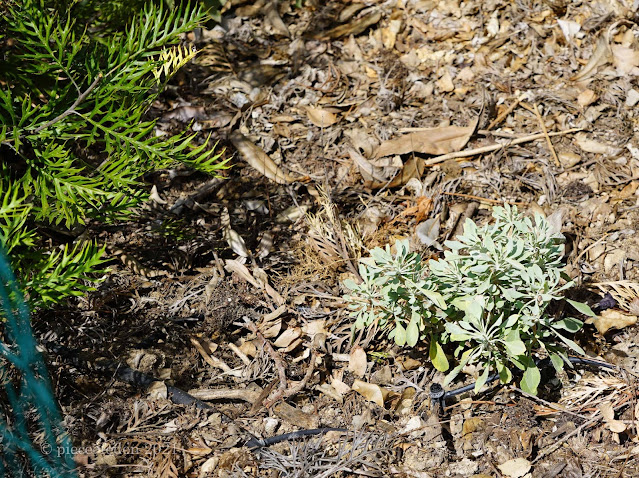 The patio as plant waiting room... 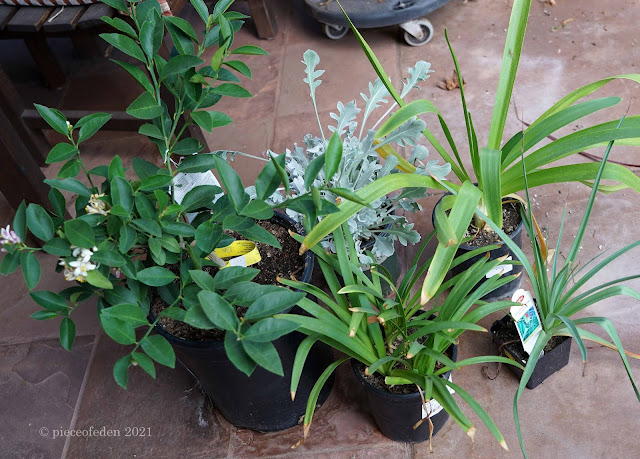 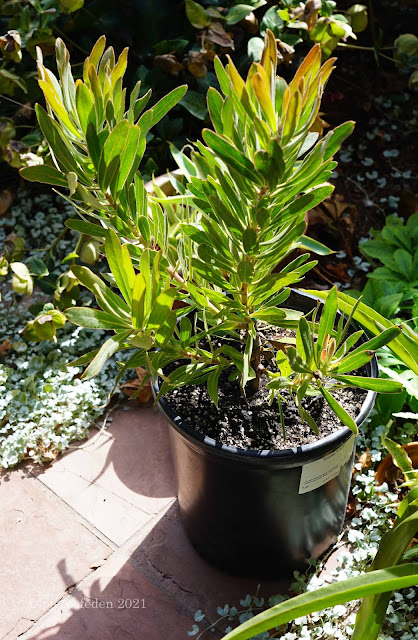 ...and a second Leucospermum 'Blanche Ito': 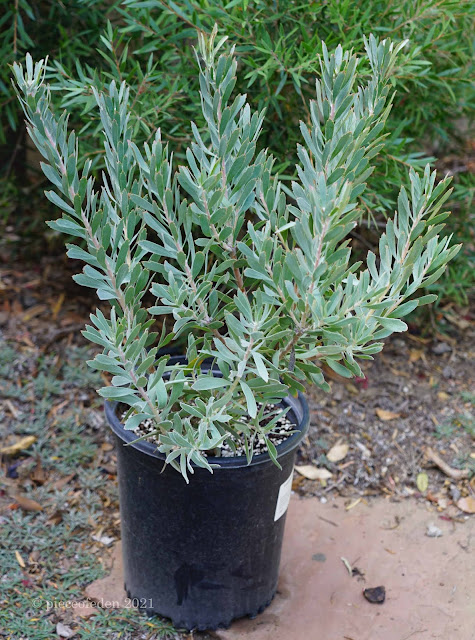 I could hardly pass up such healthy, well grown, attractively priced specimens, could I?  Nope.

The first 'Blanche' planted several years back is squeezed between two Leucadendrons.  Insufficient space is making it decline. 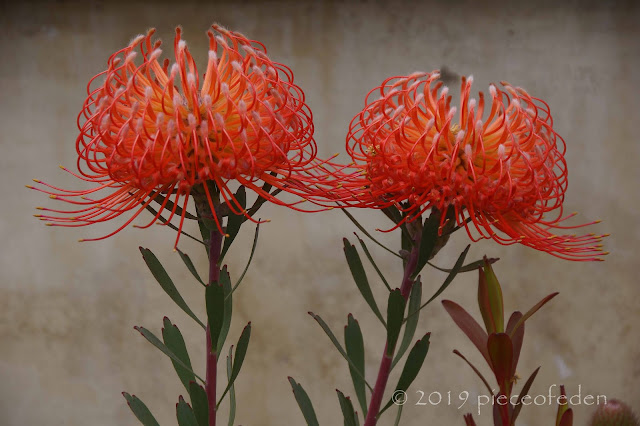 What else is going on while we await cool weather? 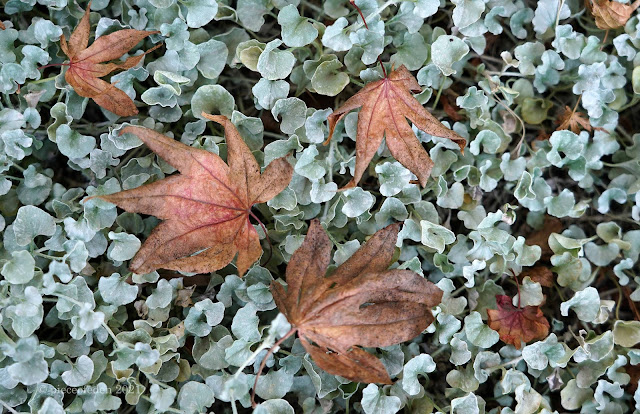 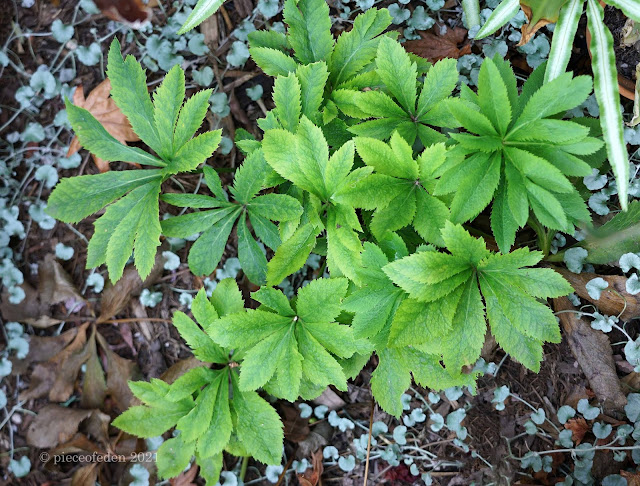 And Protea 'Pink Ice' is flowering: 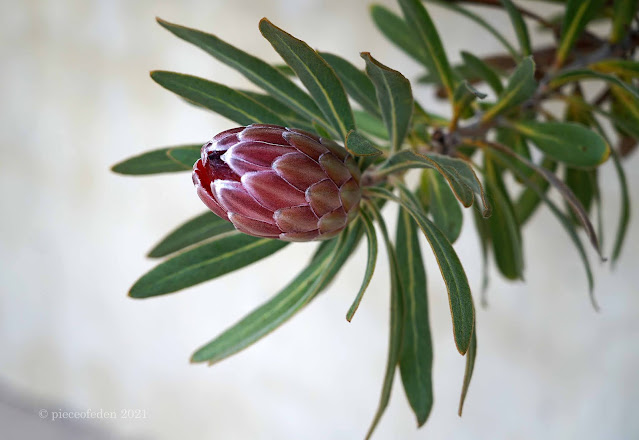 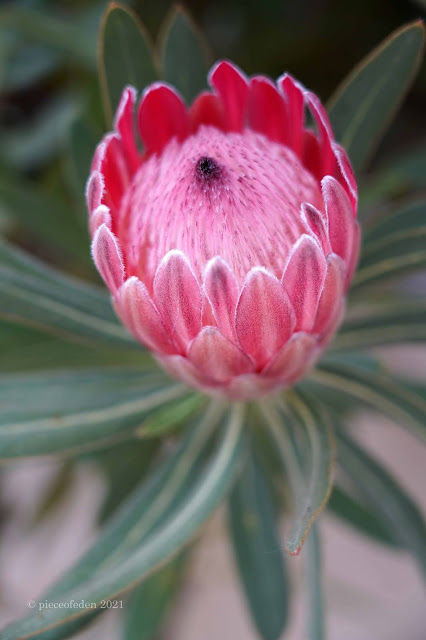 Some bad in the garden, more good.  What else?  Patience, patience.

Garden is The Gardener, Gardener is the Garden