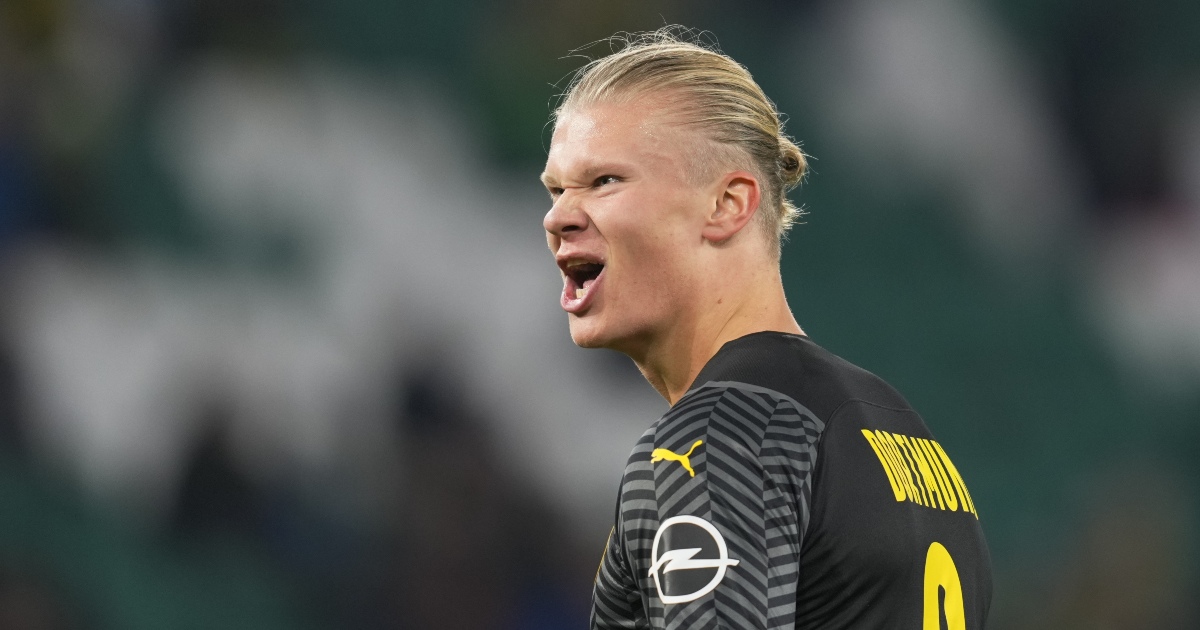 Gary Neville named two current players he compared to Thierry Henry and Eric Cantona when revealing who he’d rather see Man Utd sign ahead of Mohamed Salah in a dream scenario.

Liverpool’s Egyptian forward can stake a claim to being the world’s best player at present. Salah has notched 27 goals and 10 assists across all competitions this season. That output has gone a long way to ensuring Liverpool are eyeing up a historic quadruple.

However, when writing for Sky Sports, Neville picked out Erling Haaland and Kylian Mbappe as two players he’d rather see Man Utd sign if given the opportunity.

Explaining his rationale, Neville stated: “At times earlier in the season, Salah was at a level that was the best in the world, and he still could be.

“But if you said to me I could sign one player for Manchester United tomorrow, I would still probably go for Mbappe or Haaland over Salah.

“It’s not a Liverpool thing, I think Salah is absolutely amazing, but I just think Mbappe has got the ability to be out-of-this-world special.

Mbappe has the edge over Salah – Neville

“There is no doubt Salah is world class, but Mbappe has got something different, that edge, something that is that good, it could make him one of the true greats.

“In terms of excitement, in terms of thrill, in terms of speed, Mbappe is absolutely sensational. He reminds me of Thierry Henry, but he’s also got a bit of Cristiano Ronaldo in him – he is ruthless.”

“He’s got a bit of Eric Cantona in him, he’s the modern-day version if you like. People call it arrogant, I get that, but he has the ability to back it up.

“You can’t teach that. Football needs people like him, it needs personality.

“We want players with something about them. For every angel, we want a Haaland, a young personality who doesn’t do things perfectly.

“We want professional, well-behaved people, but we also want personality and character and people who are willing to go against the norm, that is what Haaland does.”

Meanwhile, Michael Edwards deserves enormous praise for the excellent series of transfers he has made during his era at Liverpool – but Rio Ferdinand has identified two signings the sporting director has got wrong at Anfield.

Edwards’ contract with the Reds is expiring at the end of the season. There had remained a hope that he would put pen to paper on a new deal at Anfield. But that hope has now been vanquished. Edwards penned an emotional farewell letter to Liverpool fans late in 2021.

Known as the man who brought Mohamed Salah, Alisson Becker and Virgil van Dijk to Anfield, he has played a significant role in their success. He was also behind Philippe Coutinho’s giant sale to Barcelona. That deal alone could have netted Liverpool a whopping £142m if all conditions are met.

However, not every deal he’s got right – as Ferdinand has pointed out.

Speaking on his YouTube channel, Ferdinand named Takumi Minamino and Naby Keita as Edwards’ only mistakes.

“The recruitment, the players come in and they hit the ground running,” Ferdinand stated.

“They don’t get many wrong you know, Minamino might be one, but he scored the other day. But Minamino is probably one where you say you could get more out of him.

“[Naby] Keita maybe as well, but after that, [Kostas] Tsimikas comes in and plays well, they just get it right,” Ferdinand said.

While it’s fair to say Minamino hasn’t breached Klopp’s first-team plans, the Japan international has made an impact in red. Indeed, he was Liverpool’s top scorer in their march to EFL Cup glory this season with four goals in the competition.