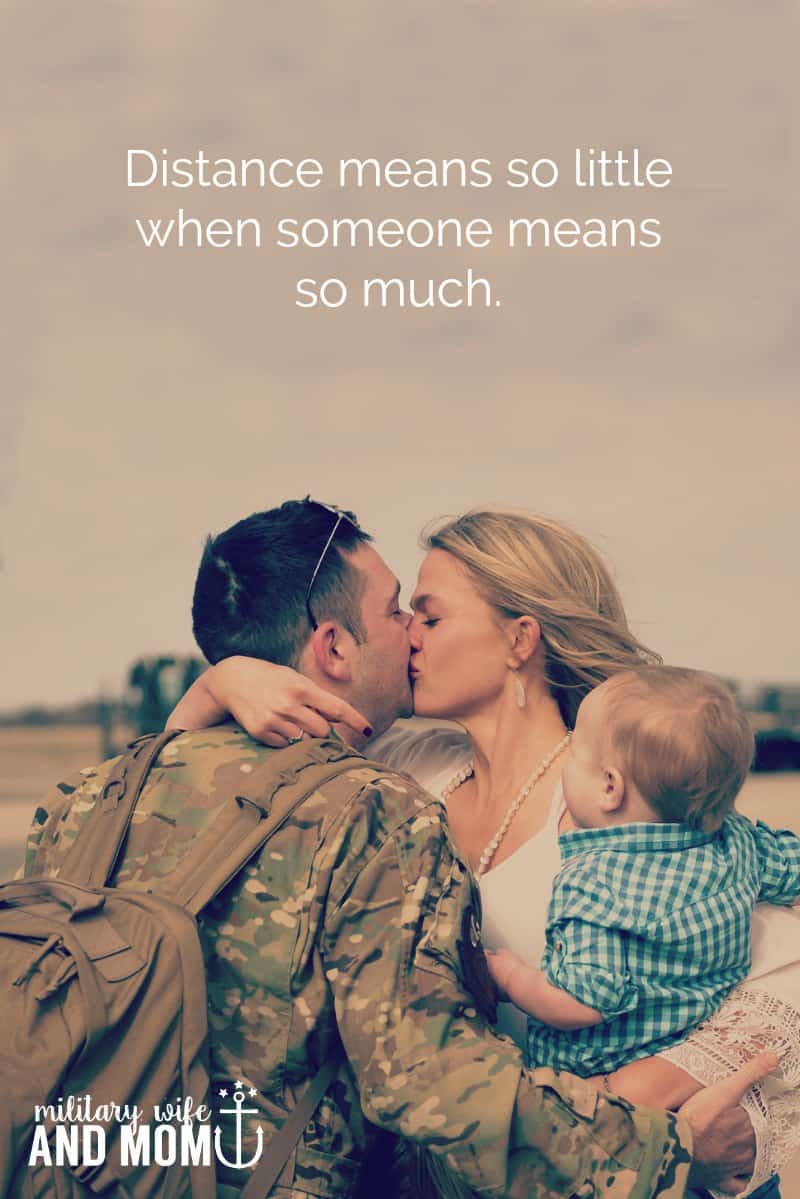 Military life can seem unfamiliar and scary at times. When it comes to navigating the many new situations that come our way as service members, military spouses, or family members, it’s helpful to know that others have also gone through them. Here’s when it’s nice to hear from others that there is hope!

We’ve gathered a variety of quotes that you’ll experience as a service member, military spouse, family member, or loved one throughout your years.

From encouragement to inspiration, from weathering deployments to another move, and for those times you are so fiercely proud of your service member you simply can’t find the words.

These quotes are perfect for letters, social media posts, and even a gentle reminder to yourself that this adventure is worth it.

Bravery is a required quote topic in military life. All those who think “I don’t know how you do it” are really thinking, “They are so brave.” Be brave!

Bravery is being the only one who knows you’re afraid. -Franklin P. Jones

It takes courage to grow up and become who you really are. -E.E. Cummings

“The bravest are surely those who have the clearest vision of what is before them, glory and danger alike, and yet notwithstanding, go out to meet it. —Thucydides” – Dave Grossman, On Combat: The Psychology and Physiology of Deadly Conflict in War and in Peace

The best way out is always through. -Robert Frost

Being brave means knowing that when you fail, you don’t fail forever. -Lana Del Rey

Be brave. Take risks. Nothing can substitute experience. -Paulo Coelho

I don’t lose any sleep at night over the potential for failure. I cannot even spell the word. – Jim Mattis

Saying good-bye can get old quickly in this military life. But when you say it with a fun or moving quote, it takes on another level.

Don’t cry because it’s over. Smile because it happened. -Dr. Seuss

There are far better things ahead than we ever leave behind. -C.S. Lewis

It takes a minute to say hello and forever to say goodbye. -Unknown

Success is not final, failure is not fatal: it is the courage to continue that counts. -Winston S. Churchill

It takes courage to grow up and become who you really are. -E.E. Cummings

Courage is the most important of all the virtues because without courage, you can’t practice any other virtue consistently. -Maya Angelou

Above all, be the heroine of your life, not the victim. -Nora Ephron

Quotes for Inspiration and Motivation

Inspiration comes from a lot of different places, and these quotes are a great place to start when you need a little extra motivation.

Military spouses find their strength along the way. Everyone began frightened of distance, deployment, and the unknown. -The Seasoned Spouse

The most beautiful things in the world cannot be seen or touched, they are felt with the heart. -The Little Prince

How lucky I am to have something that makes saying goodbye so hard. -A.A. Milne

She stood in the storm. And when the wind did not blow her way, she adjusted her sails. -Elizabeth Edwards

Motivation is the art of getting people to do what you want them to do because they want to do it. – Dwight D. Eisenhower

Pushing forward on your career and goals while balancing the military lifestyle and holding down the home front can be intimidating. Remember that perseverance is key!

Patience and perseverance have a magical effect before which difficulties disappear and obstacles vanish. -John Quincy Adams

Perseverance is not a long race; it is many short races one after the other. -Walter Elliot

“There are not enough chinamen in the world to stop a fully armed Marine regiment from going where ever they want to go” – General Lewis B. “Chesty” Puller

Great works are performed not by strength but by perseverance. -Samuel Johnson

No one quite understands the strains of deployment like another military spouse. There are good times and bad, and no matter how long they’re gone, you miss them!

True love doesn’t mean being inseparable; it means being separated and nothing changes. – Unknown

Distance means so little when someone means so much. – Unknown

When we can’t be together, keep me in your heart, I’ll stay there forever. -Winnie the Pooh

When you’re looking for things to be grateful for, it’s harder to be upset. Even with the military! Start your gratitude journal with one of these great quotes and list all those things you’re grateful for today.

Gratitude is a currency that we can mint for ourselves, and spend without fear of bankruptcy. -Fred De Witt Van Amburgh

“These Marines left their home–all these great Americans left their home–signed up during a time of war and said, ‘I wanna do that.’ And we owe them so much gratitude. I am so, so proud. And they understand that in our profession there can be no second place. There can be no losing. Because the weight of our nation rests on their shoulders.” – Sergeant Major Bradley Kasal

Be thankful for what you have; you’ll end up having more. If you concentrate on what you don’t have, you will never, ever have enough. -Oprah Winfrey

It is impossible to feel grateful and depressed in the same moment. -Naomi Williams

When I started counting my blessings, my whole life turned around. -Willie Nelson

Gratitude and attitude are not challenges; they are choices. -Robert Braathe

When life has you down, and Murphy is visiting, remind yourself that tomorrow is a fresh day and you can do it!

It doesn’t get easier. You just get stronger.

Anything worth having is worth waiting for.

A soldier doesn’t fight because he hates what is in front of him. He fights because he loves what he left behind.

Only the strongest woman can survive missing half her heart.

Sharing your gratitude with others lifts them up too. While saying “thank you” may be hard, these quotes can help you remember why it’s so important.

We would worry less if we praised more. Thanksgiving is the enemy of discontent and dissatisfaction. -H.A. Ironside

Silent gratitude isn’t very much use to anyone. -Gertrude Stein

As we express our gratitude, we must never forget that the highest appreciation is not to utter words, but to live by them. -John F. Kennedy

Gratitude is a duty which ought to be paid, but which none have a right to expect. -Jean-Jacques Rousseau

Appreciation is a wonderful thing: It makes what is excellent in others belong to us as well. -Voltaire

There’s no question that we’re proud of our service members and their outward show of patriotism. But it still doesn’t hurt to remind the rest of the world of the work they are doing. These quotes are a great way to do just that, without drawing too much attention to those we love.

It is the pride of my heart to have been one of the earliest adopted sons of America. -Marquis de Lafayette

Never in the field of human conflict was so much owed by so many to so few. -Winston Churchill

Take patriotism away, and the nation’s soul has fled. -Edward Mark Deems

Sometimes quotes help us express our emotions when we struggle to find the words. Sometimes the harsh reality is too much coming from our own lips, and we hide behind the words of someone else.

Whatever the reason that you use these quotes, remember that your words are powerful and the world needs to hear them.