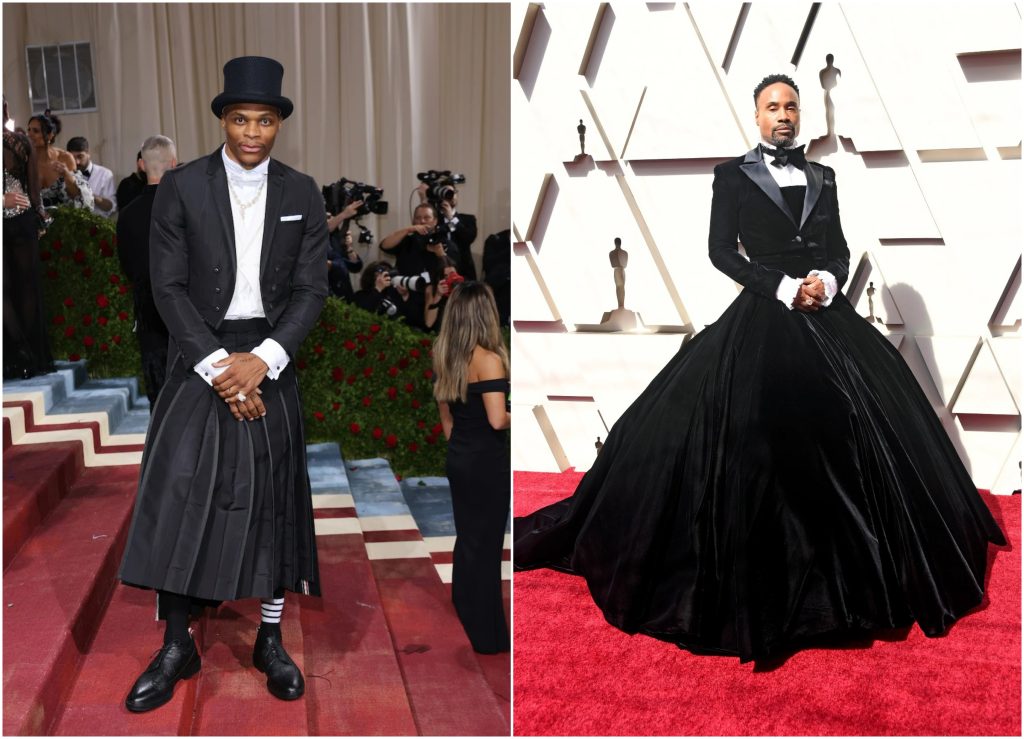 Back in 2020, Harry Styles broke the internet when he appeared on the front cover of Vogue in a Gucci dress, since then the pop sensation has become the poster child of gender neutral fashion, regularly wearing womenswear pieces on stage and in music videos for millions to see.

And he’s not the only one. For years  actor and singer Billy Porter has regularly attended red carpets in ballgowns, while just last week at the Met Gala pro basketball player Russell Westbrook rocked a pleated skirt.

Gone are the days when pink was for girls and blue was for boys. Gender norms have been turned on their head in recent years with the rise of non-binary pronouns being impossible to ignore.

However, this isn’t just about gender identity – it’s about personal taste. Men are increasingly rejecting traditional ideas of masculinity with how they dress while many women turn to looser, masculine silhouettes.

As more celebrities and social media stars continue to bend society’s idea of dressing based on gender, retailers are increasingly ditching mens and women’s labels and offering gender-neutral collections.

While the likes of H&M and Zara have dabbled with gender-neutral collections in the past, Asos’ Collusion range, which champions unisex designs and inclusive sizing, has been a permanent range since 2018 and it’s now a top 10 brand on its website.

Asos is not alone. Abercrombie & Fitch-owned Gilly Hicks revealed last year that it would become gender-inclusive while in luxury Fear of God‘s entire range is labelled as unisex.

But why is it such a big focus for retailers? “Simply put, because it’s becoming increasingly important to them,” says an Asos spokesperson.

“We listen to our twentysomething customers and want to champion the things that they care about – there are many ways we look to support this, including through offering a diverse and flexible product offering.”

Katie Devlin, fashion researcher at trends intelligence experts Stylus refers to Research from student discount website UniDays which found that 79% of Gen Z shoppers often buy clothes assigned to the opposite gender to which they identify.

It is clear that young consumers are already embracing gender neutral fashion, even if many retailers haven’t caught up yet.

Devlin says that this shows that Gen Z shoppers are making the extra effort to look through sections and sizes that aren’t necessarily “for them” in order to find the pieces and styles they want. She says that illustrates that there’s “a huge opportunity here to make the shopping experience easier for and more welcoming to these demographics”.

“All too often, fashion has tried to dictate to people what they need to be wearing and how they need to wear it”

However, it is important to get gender neutral fashion right.

“When it comes to Gen Z, inclusivity is paramount, but so too is authenticity,” Devlin emphasises.

Many gender neutral collections in the past featured clothing that was simply neutral, “not reflecting the experimental and expressive aesthetics of the target market”, says Devlin.

“If retailers are to be truly inclusive when embracing gender neutral fashion, it not only needs to also be size inclusive, but also reflective of Gen Z’s style and interests. Otherwise, there’s the risk of coming across performative and alienating the consumer.”

When Asos reviews its product assortment, it doesn’t view the products by gender but by accessibility, efficacy, customer appeal and position in the market.

And this isn’t limited to fashion. You’ll also see much of the same skincare offer on Asos’ menswear and womenswear Face + Body product pages too.

It adds that: “We also want to make sure our customers feel represented by the people we feature across our content and channels, and look to portray realistic, as opposed to idealistic, versions of twentysomethings.”

A TikTok trend for all

We now live in a world where social media trends, on TikTok in particular, have an astonishing amount of influence on how businesses operate.

How much have trends around fluid fashion on the app played a part in the rise of the gender neutral phenomenon?

Charlie Oxley, co-founder of the gender fluid fashion retailer Vintage Threads, says that TikTok has been powerful as it’s given a platform for people to embrace trends no matter their gender or the outfits that they wear.

“The platform is all about not taking yourself too seriously which has been very positive in changing people’s perceptions on what you can and can’t wear.”

Devlin adds that social networks like TikTok have opened up global communication channels for young people in an unprecedented way so “naturally big conversations around culture become accelerated really quickly”.

“It allows Gen Z demographics living outside of big cities or in more conservative areas to engage with fashion trends and experiment with their own self-expression, while also feeling connected to a community of like-minded young people.”

Trends in fashion come and go but gender fluid fashion has longevity because, as Asos says, it “is driven by much more than style trends – it’s reflective of the changing attitudes, interests and needs of customers, and it’s important that brands adapt to this”.

Oxley’s Vintage Thread’s co-founder Freddie Rose adds that, all too often, fashion has tried to dictate to people what they need to be wearing and how they need to wear it.

But now, “it’s really refreshing that we are now in an era where fluid fashion isn’t just accepted but being championed and celebrated”.

He’s confident that it’s here to stay not just because fashion needs to adapt but also society as a whole.

How will retail adapt?

In 2020, the British Fashion Council revealed that London Fashion Week would become gender-inclusive, merging its womenswear and menswear shows.

But will major brands follow suit and ditch gender labels?

Forward-thinking brands such as Asos have already hopped aboard but retailers have yet to adopt gender neutral en masse.

However, they may soon be forced to as shoppers are already voting with their feet.

“It’s about being able to reflect and accommodate the way people are already shopping,” explains Devlin.

“If young consumers continue to ignore gendered divisions and categorisation while shopping, then there comes a time when we have to ask what purpose it serves, and if there is a more effective way of doing things.”

But what will happen to how fashion stores, which are laid out in separate menswear from womenswear, look?

Vintage Threads’ store located in Seven Dials has adopted “a very gender fluid approach” to the layout, according to Rose, who says customers entering the store often ask where the women’s department is.

“Some ask if we are just a retailer for men and when we explain that we are an unisex outfitter, we often get a quizzical look in return,” he explains.

However, Rose believes doing away with gender departments could be a step too far for mainstream retailers.

“It’s important not to polarise those that have always shopped in certain ways, particularly when there are undoubtedly items that appeal significantly more to respective sexes,” he adds.

However, some big retailers have done away with gender layouts. Schuh’s TwentyTwenty format store on Oxford Street organises products by brand rather than gender following feedback from its 16-to-24-year-old customer while Superdry has also started displaying products based on consumer segments rather than by gender.

Online, Asos shoppers can filter products by men’s, women’s and unisex but they can also filter by style and size, “so whatever they’re looking for and whatever their style, customers can find the fashion that gives them the confidence to be whoever they want to be”.

The fashion giant says that its unisex ranges “are always popular” and whilst it currently have no plans to stop filtering by womenswear and menswear – as it knows many of its customers like searching for products this way – ensuring its offer is inclusive remains high on its agenda.

As the world around us becomes more accepting of the fluidity across genders, it only makes sense that clothing retailers adjust and adapt to fit into their customer’s world.