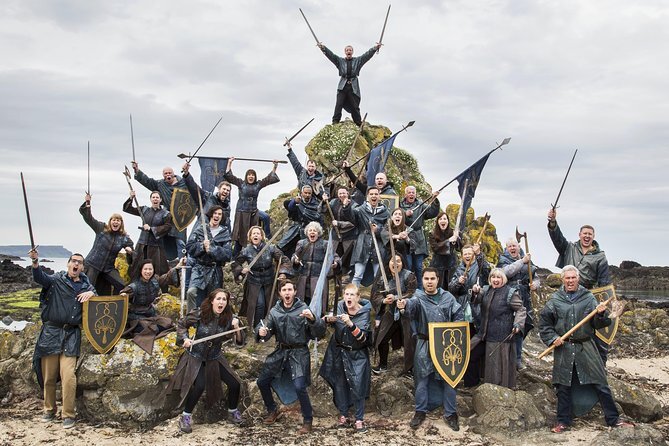 Fandoms and Fan Studies in Ireland, North and South

This opening statement presents a digest of prevalent fandoms and fan studies scholarship on the island of Ireland, North and South. Thus, it spotlights music, media, and sports fandoms, but food fandom and political fandom have distinct local flavors too. Analogously, fan tourism is a defining fan practice on the island and so also features in my discussion. Though referring to traditions specific to the North, I do not wish to suggest nor impose an artificial North/South binary. Rather my discussion—like the island itself—ranges across an open border, for despite a stubborn line on a map, both territories have much in common.

Racial/ethnic homogeneity provides one such site of commonality. Despite an increasingly diverse population, the island of Ireland remains a majority-white space.[1] Racial/ethnic homogeneity deleteriously frames and informs fandoms and fan studies undertaken on the isle. Thus, we find less scholarship interrogating racial dynamics—including whiteness (as the norm)—and regarding media fandom, for example, we see less racebending practices. Such work and play are not wholly absent but undoubtedly require more attention.

British imperialism and colonialism—and their aftermaths—likewise scar the island but in different ways. Consequently, I present a brief historical-geopolitical exposition of the shared island for whilst legacies of partition do not deeply mark fandoms and their study in the Republic of Ireland, it is impossible to discuss fandom and fan scholarship in Northern Ireland without recourse to the “Troubles” and its “post-conflict” carryovers.

Though not yet always foregrounded, these two circumstances must be born in mind when discerning the shape of fandom and fan studies on the island of Ireland.

During the 1960s-1990s, a struggle for civil rights in the North enfolded a nationalistic desire for a (re)united Ireland; a struggle waged by Irish nationalists and republicans from within the disenfranchised Catholic community and violently suppressed by the British government and its local Unionist/Protestant government, state authorities, and security and paramilitary forces. A conflict colloquially known as the “Troubles”. The signing of the Good Friday Agreement (1998) marked the official end of the “Troubles” and Northern Ireland’s entry into a “post-conflict” era. Or so people hoped. Today, Northern Ireland experiences relative peace but the legacy of the “Troubles” and divisive events such as Brexit—the UK’s withdrawal from the European Union—continually stress and jeopardize Northern Ireland’s status as a “post-conflict” society.

The Good Friday Agreement (1998) is a dividing line in Northern Irish fandom, particularly media fandom. For example: Being a media fan during the “Troubles” was difficult on several fronts; the Conflict dissuaded artists and shows from traveling to the North and the very real threat of bombs similarly dissuaded fans and audiences from attending the few events that did take place. People were still fans of international (mainly US) media but from afar; attention also turned to local entertainment and media.

“Post-conflict” Northern Ireland saw an explosion in screen production (due to the “peace dividend”, for example). Creative industries flourished and continue to do so, especially television and film industries; Belfast is now often described as the “Hollywood of Europe”. Without the ceasefire, acclaimed TV shows and films—notably The Fall(2013-2016), High-Rise (2015), Derry Girls (2018-present), and Game of Thrones (2011-2019)—would simply not have been filmed in Northern Ireland. And no filming means no filming locations and no filming locations means no fan and screen tourism industry. International fans of the Titanic story, historical event and Hollywood film, would find it much harder to visit the birthplace of the ill-fated steamship. Without the Agreement, fan practices and fan studies centering the North of Ireland would look very different today. No more kitschy—yet safe—fan tourism industry and relatedly no “Troubles tourism” or “dark tourism”, another bourgeoning post-Agreement activity.

The rise of media fan tourism in the “post-conflict” North mimics an established tradition in the South of the island, with both territories welcoming local and international fans to important sites. (An industry greatly impacted by the Covid-19 pandemic.) The quiet Mayo village of Cong has been ministering to fans of The Quiet Man (1952) since the mid-1950s. More recently, Skellig Michael—a rocky outcrop off the coast of County Kerry—hosts boatloads of intrepid Star Wars fans. Literary fans are also well-served in the South and increasingly in the North, and music fans too. Walking tours (DIY and guided) allow fans to visit key sites around Dublin—James Joyce’s Ulysses and Dubliners, for example—and Belfast—C.S. Lewis Square and Trail or the Van Morrison Trail.

More generally, media fandom on the island is vibrant and thriving (online and real world). Media fans in the North today, however, appear underserviced viz. international fan conventions. Belfast and Derry—the North’s top two cities—remain provincial, absented from or on the periphery of the global convention circuit. Whilst there is local activity, home fans must still travel to Dublin or London to attend (large) events, and they do. Demand far outweighs availability: Following a four-year hiatus, Comic Con NI is set to return in 2022 and fans in the North are excited; organizers to date have sold half of all available tickets six months before launch. Recognizing this, one of Comic Con NI’s organizers observed, “Many of these big shows can be London-centric and many fans can miss out, so we are glad to be able to bring it to other regions.”

As around the Global North, the popularity of internationally-focused conventions is rooted in—and demonstrates—the dominance of US media in local media fandoms. So too music fandoms, yet home artists garner large, localized fandoms too, as with Daniel O’Donnell, Christy Moore, and more recently Denise Chaila. As elsewhere, K-pop is sweeping through the island (online and real world), coalescing around the hugely popular K-pop band, BTS and their global “ARMY” fandom. This all-island fandom is set to expand especially, perhaps, as K-pop fan and Irish representative—Sodem Solana from Dublin—took home the Grand Prize at the 2019 World K-Pop Festival. Global success conjuring another of Ireland’s lively popular music fandoms, the Eurovision Song Contest; Ireland has a record tally of seven wins and a fanbase to match.

Local music fandom can acquire a political timbre; music fans in the North often use music to express and perform “Irishness”. Irish “rebel” bands such as The Wolfe Tones, The Dubliners, or the aforementioned Christy Moore are famed for performing songs about Irish rebellions and against British domination and rule over Ireland. Thus, they are extremely popular within Nationalist/Catholic communities; Irish folk music fans from Unionist/Protestant communities can, however, find it difficult to enjoy or to support these kinds of bands, publicly.

Ties between fandoms and cultural identity (notably nationality, religion, and class) present also within sports fandoms and especially within—predominantly male—ball games fandoms, such as men’s football (soccer), men’s Gaelic games, and men’s rugby, North and South. Rugby, for instance, is felt the purview of middle- and upper-class sports fans; the national Irish rugby team has also, quite uniquely, two anthems—Amhrán na bhFiannhe (“Soldier’s Song”) and “Ireland’s Call”—in a bid to foster unity within an all-island team and its border-crossing fandom. In the North, fanbases notoriously coalesce around national/cultural identity, fostering intra-community bonds and local sectarianism. We should remember here too that fandoms do not standalone but overlap. Participating in “rebel” music fandom and Gaelic sports fandom, for example, not only helps fans in the North perform “Irishness” but buttresses their sense of being Irish (in a contested, liminal territory). Given that public demonstrations are a critical facet of identity politics, fan tourism — international and provincial — is a key element of ball games fandom.

But ball games are not alone in sporting, if you will, massive fandoms. Motorsport, especially traditional (motorcycle) road racing and car rallying, attract huge, and frequently cross-border and cross-community, fandoms too. As before, these fandoms are predominantly male. Fans heroize individual local drivers and riders, such as, from the North, the much-loved—and internationally renowned—late Joey Dunlop. Associated fan practices include traveling to national and local racing events but also buying road-legal versions of their heroes’ racing bikes (as well as race suits and helmets) and, well, illegally racing them. (Car and motorcycle fandoms are also widespread throughout the island with fans forming “owner clubs” around car makers, such as Mini or Land Rover.)

It is unclear if these (seemingly) dominant fandoms are more popular than other fandoms or simply appear so because they are more accepted and thus more visible. (Local reporting of media fandom, for instance, remains infrequent and patronizing and tends to focus on economic benefits.) Research has been undertaken—mostly within politics or sports studies departments—exploring the intersection of ball games, cultural identity, and politics; in fact, the subject quite dominates fan scholarship on the island. Yet, whilst focusing routinely on class, religion, and nationality, ball games fan research routinely overlooks gender and race/ethnicity. But the androcentrism of ball games fandom on the island—if not sports fandom more generally—cannot be overlooked; women may and do participate, but they are often tokenized and marginalized. Racial minorities, disabled people, and queer people are similarly relegated within predominantly white, male, cishet, non-disabled ball games fandom, often establishing their own fan communities (and sports clubs).

Returning now briefly to the subject of fan scholarship on the island, as elsewhere, fan studies — pedagogy and research—is a disparate field of study. Scholars are often independent or teach and work within associated disciplines, such as Arts and Literature programs, media and cultural studies, sociology, sports studies, and—particularly those located in the North—politics. There is no all-island scholarly network as yet, but scholars may connect through global fan organizations, such as the “Fan Studies Network” or the SCMS “Fan and Audience Studies Scholarly Group”. Not unusually, there are no opportunities to teach or study programs focused solely on fandom and participatory culture. (There are, however, increasing opportunities to teach and study self-contained fan-centered modules, notably on media or sports fandom.)

To conclude, fandom on the island, particularly in the North, is strongly shaped not only by cultural and political traditions but economic demands. Fan tourism is now big business and arguably helps secure the North’s relative and tentative peace. As can be seen, whilst fandom on the island is indubitably shaped by global forces it also retains strong local traditions and practices, again particularly in the North. Excusing the titanic pun, this outline is just the tip of the iceberg regarding fandoms and fan studies on the island of Ireland; I am looking forward to continuing and expanding this conversation, particularly with relation to tensions around transnational and transcultural fandoms/phenomena.

Based in the North of Ireland, Ellen Kirkpatrick is an activist-writer with a PhD in Cultural Studies. In her work, Ellen writes mostly about activism, pop culture, fan cultures, and the transformative power of storytelling. She has published work in a range of academic journals and media outlets. Her forthcoming book on the radical imagination and superhero culture is slated for publication in 2022 (punctum books). Ellen can be found writing at The Break and on Twitter @elk_dash.