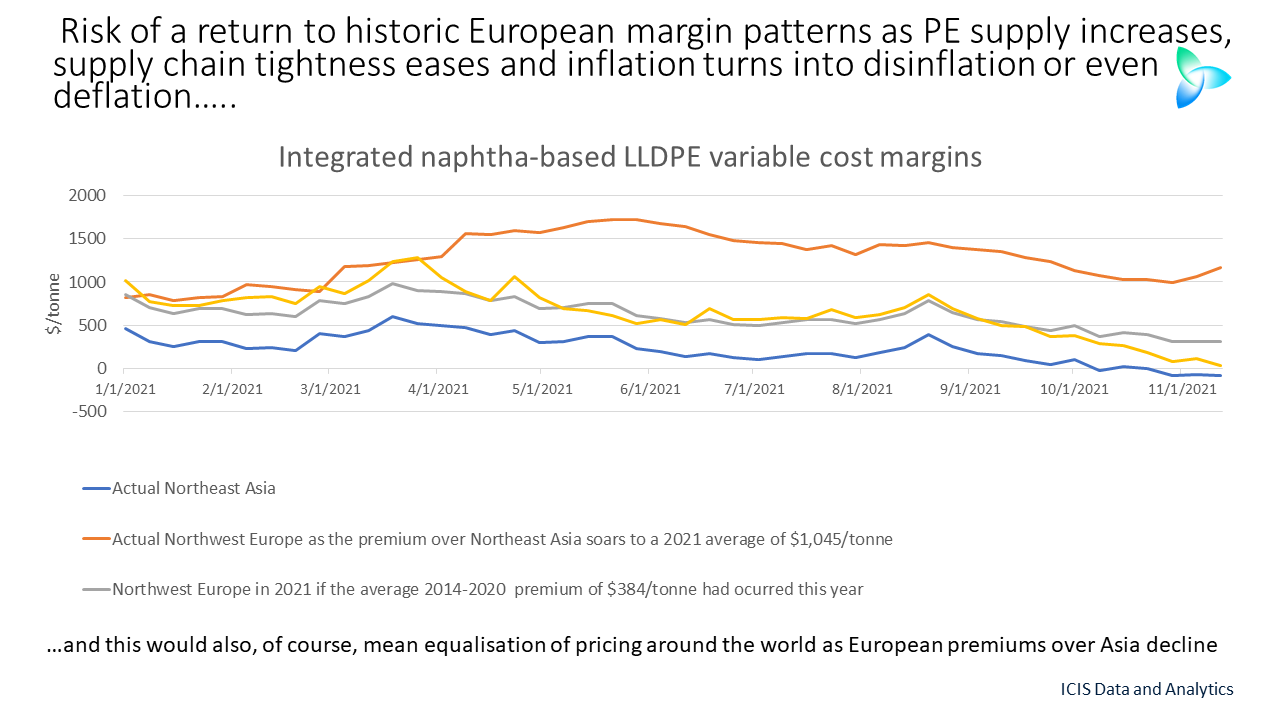 THE BALTIC DRY INDEX, one of the excellent barometers of overall economic activity, was late last week at its lowest level since June on a slowing Chinese economy, easing congestion at Chinese ports and a fall in Chinese coal imports (more on this in a moment).

“The index was around 1,000 a year ago, and then accelerated to peak at 5,650 last month – and has since nearly halved,” wrote my fellow blogger Paul Hodges, in his timely post last week.

Back to the theme of China and coal. Talking to people who know what they are talking about would have told you in early October that forecasts of tight coal supply – and thus tighter petrochemicals markets in China until as late as next year’s Lunar New Year Holidays (12-17 February) – had to be questioned.

When Beijing wants to get something done it normally gets it done because it has lots of central control over the economy and numerous policy levers.  By late last week, thermal coal contract prices on the Zhengzhou Commodity Exchange had more than halved since their record high on 19 October.

Why this of course matters for our industry is that production of some 30% of Chinese polypropylene (PP), 15% of high-density polyethylene (HDPE), 11% of low-density PE (LDPE) and 8% of linear low-density PE (LLDPE), is via coal.

The September-October coal shortages had raised the hope that there would be a recovery in Q4 Chinese imports of PE and PP. Instead, in the case of PP, and to a lesser extent HDPE, Chinese exports seem likely to increase as local coal-based Chinese production stabilises.

Barring a very severe winter in China, the worst of the country’s coal shortages appear to be over. If this is the case, markets will be heavily shaped by the deflationary impact of weaker Chinese polyolefins demand growth in 2021 over 2020 and rising local capacities:

The US Energy Information Administration’s (EIA) November Short-Term Energy Outlook said that the recent run-up in oil prices was different from previous bull runs. In the past, major factors behind rising crude costs had been outages, but, on this occasion, supply was tight because of production limits, said the EIA.

“We estimate that world crude oil consumption has exceeded crude oil production for five consecutive quarters going back to the third quarter of 2020,” wrote the EIA.

“We forecast global crude oil demand will exceed global supply through the end of the year. However, we forecast that global oil stocks will begin building in 2022, driven by rising production from OPEC+ and the US, along with slowing growth in global oil demand,” the EIA said.

The Paris-based International Energy Agency, in its November report, forecast a potential reprieve from high prices on rising US shale oil production. Crude output from the biggest US shale field, the Permian, was in December this year set to beat its pre-pandemic record, said Reuters.

The politicians are getting involved because of the cost of oil, which, according to Paul in his blog, is now at 3% of global GDP – a level that has previously triggered recessions. US president Joe Biden has called on OPEC to raise output. The US and China are reported by Reuters to be discussing releasing crude from their strategic reserves in order to put pressure on OPEC.

We also have the deflationary impact on crude demand of renewed lockdowns in Europe as the winter brings a resurgence of coronavirus, and as re-opening of adequately vaccinated countries leads to a rise in cases.

So, prepare for potentially lower crude prices and their deflationary impact on petrochemicals markets.

Also consider government measures to solve the container freight crisis. Delays at the Port of Los Angeles were, for instance, easing because freight carriers were facing fines if they let cargoes linger as “sweeper ships” collected empty containers, according to Bloomberg.

“Tucked into the $1tn infrastructure bill that US President Joe Biden signed into law today (15 November) is a big win for the long-haul trucking industry: an apprenticeship program that would allow trucking companies to hire drivers as young as 18,” wrote Quartz.

There are many other examples you can find of government efforts to relieve supply chain pressures, which I believe will together make a significant difference. As with the price of oil, the politicians have strong motives to fix the supply chain issues.

But I believe the single biggest factor behind an easing of supply chain pressures, most notably in seaborne containers, will be the laws of supply and demand.

Demand for durable goods in the rich world has grown hugely since the second half of last year. In 2021, durable goods spending in the US was 29% higher than during the pre-pandemic year, according to Deloitte Insights.

It seems logical to assume that as economies continue to open up, demand for durable goods will decline as people spend less money on new computers, TVs etc. and more on holidays and restaurants.

Yes, as I said, lockdowns are increasing in Europe. But I see these measures as temporary as societies learn to live with a high level of cases, the vast majority of which will be mild because of the success of vaccinations.

The scale of the pent-up demand for services is huge.  For example, in the UK during 2020, spending on services fell by 30% compared with a 4% decline during the 2008 Global Financial Crisis, said the Institute of Fiscal Studies. There are a lot more pints yet to be pulled and holidays taken in Spain and Greece as the UK opens up further.

Prepare for the possibility of a fall in container freight rates, sooner than conventional thinking suggests.

I am beginning to think that if you add all this together, we could see a lot of downward pressure on global polyolefins markets in Q1 next year. This could be especially so in PE because of, as I said, the fall in Chinese demand growth and rising US and Chinese supply.

Why the US Old Normal in PE will have to return

A series of extreme weather events have severely restricted US PE supply in 2021. Winter Storm Uri was followed by hurricanes, the severest of which was Hurricane Ida.

US PE exports as a percentage of total production have averaged in the low 30% range across the three grades when the average needs to be 42-44% to achieve operating rates of 90%, and so healthy plant economics, said my colleagues at the ICIS US-based service, Chemical Data (CDI).

Now let’s just focus on the implications of rising US exports in 2022 on LLDPE, along with what I think will happen in China next year, combined with the context of the broader economic deflationary or disinflationary pressures described above.

Based on the US Customs Department data for January-September 2021, US LLDPE exports for the whole of this year are in line to reach 4.7m tonnes. This would compare with 2020’s actual exports of 5.5m tonnes.

Our excellent ICIS Supply & Demand Database predicts that US LLDPE production in 2022 will reach 9.3m tonnes – around a million tonnes higher than in 2020. It therefore seems reasonable to expect that US exports in 2022 will exceed their 2020 level, barring any further major production losses.

As the Common Prosperity policy pivot continues, I see Chinese LLDPE demand growth at 4% next year versus our base case of 6%. China is pushing towards making its GDP growth less commodity-intensive as it also heavily restricts the use of single-use plastics.

We forecast an 11% growth in Chinese LLDPE capacity in 2022 as operating rates average 82% versus this year’s 88%. But my view is that operating rates could be higher; why not closer to the 90% optimum rate set for US plants?

More feedstocks will be available for PE plants because of upstream refinery restructuring. Dual Circulation, another set of government policies, includes the push for greater independence from commodity imports.

Putting an exceptional 2021 aside, the US has become the world’s second biggest exporter behind the Middle East. This is hardly surprising given that, as I discussed two weeks ago, US LLDPE capacity is forecast to more than double in 2015-2022, contrasting against a mere 18% increase in local demand.

China accounted for an estimated 63% of global total global net imports of LLDPE in 2020 and 37% of global demand, with Asia and Pacific in second place at 18%.

The great divergence in LLDPE margins and pricing

As I’ve just demonstrated, what happens to US and Chinese supply in 2022, and to Chinese demand, are by far the most consequential issues for the global LLDPE business.

Incredibly tight US and European markets, largely because of the lack of US supply (Europe buys a lot of its LLDPE from the US), has led to very high pricing – with expensive crude and other inflationary factors adding to the firmness of markets.

Meanwhile, pricing in China has been comparatively much lower. China and Asia in general, with developing Asian consumption depressed by lack of access to vaccines, have found it difficult to export surpluses to the West because of container freight shortages. This has added to the upward pricing pressures in Europe.

Free-delivered European C4 film grade LLDPE prices traded at an average discount over their CFR China equivalent of $44/tonne in 2000-2020. In January-October this year, the average European premium was $418/tonne.

In the US, the average premium for US delivered C4 film grade contract prices over China was $559/tonne from 2011, when our US assessment began, until 2020. It was $661/tonne in January-October this year.

Let’s take this a step further, making use of our excellent ICIS margins data. Consider the slide below. 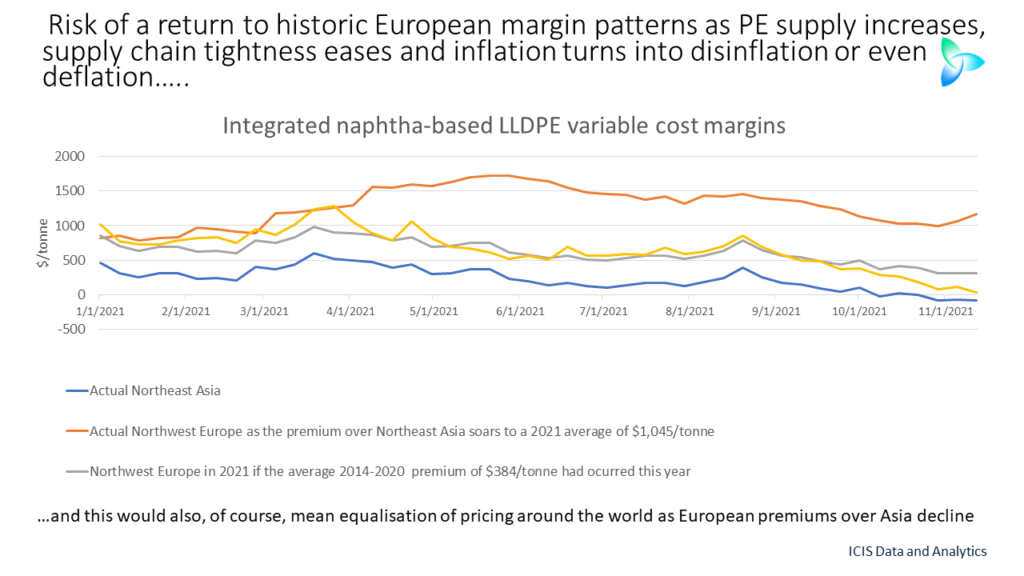 The grey line shows what would have happened to European margins in 2021, up until the second week of November, if they had exactly followed their average premium over NEA margins in 2014-2020 at $384/tonne.

The yellow line shows what would have happened in January-November 2021 if the exactly same week-by-week premiums were repeated during the same period last year, leaving average premiums at $427/tonne.

As you can see from the right-hand tip of the yellow line, European margins would have been close to breakeven during the second week of November. During that week, NEA margins were -$84/tonne.

Now let’s repeat the exercise for the US. 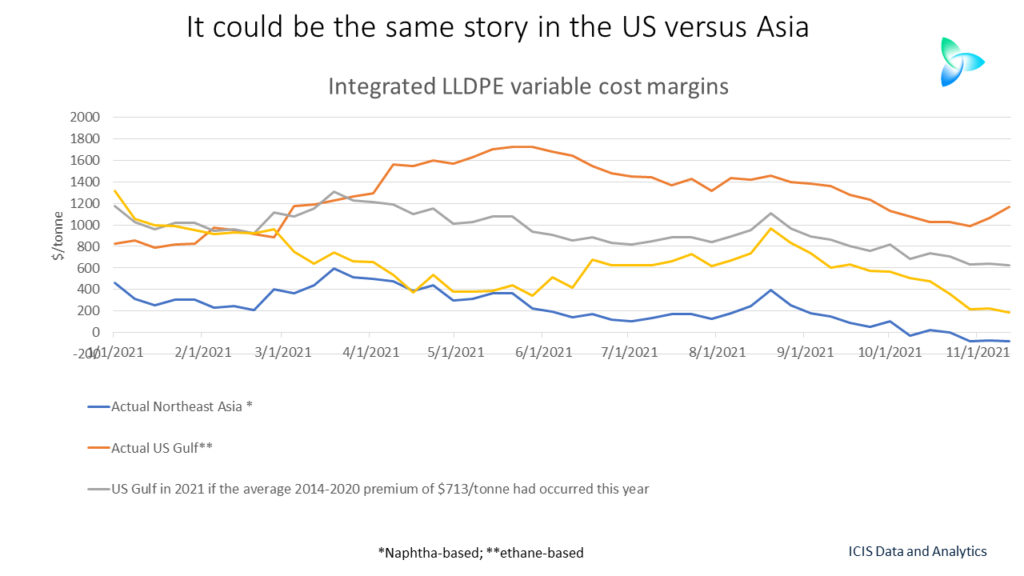 You can again see in the blue and grey lines how after a short period at the start of the year when the premiums over NEA under the alternative outcomes would have been substantially lower.

Under the scenario of the premiums in 2020 being exactly repeated this year, during the second week of November the US would have been struggling. As NEA margins fell to -$84/tonne, US margins would have been at $187/tonne. Their actual level was $1,169/tonne.

I am sure you can see where I am coming from: patterns in global LLDPE pricing and margins returning to historic patterns as inflationary pressures ease, as supply lengthens, as demand remains below expectations in China and as lower container freight rates make it easier to ship around the world.

I believe this could happen by as early as Q1 next year.

But to stress again, this is just one view, one scenario, based on my interpretation of the data. You of course need other scenarios. Then you need to stress test your businesses under a full range of scenarios.

This is where we can support you through our data and analytics services. As this blog has demonstrated, our data is extremely powerful in identifying trends and directing you towards the right solutions for your business.

The post Global polyethylene could move from inflation to deflation by as early as Q1 2022 appeared first on Asian Chemical Connections.