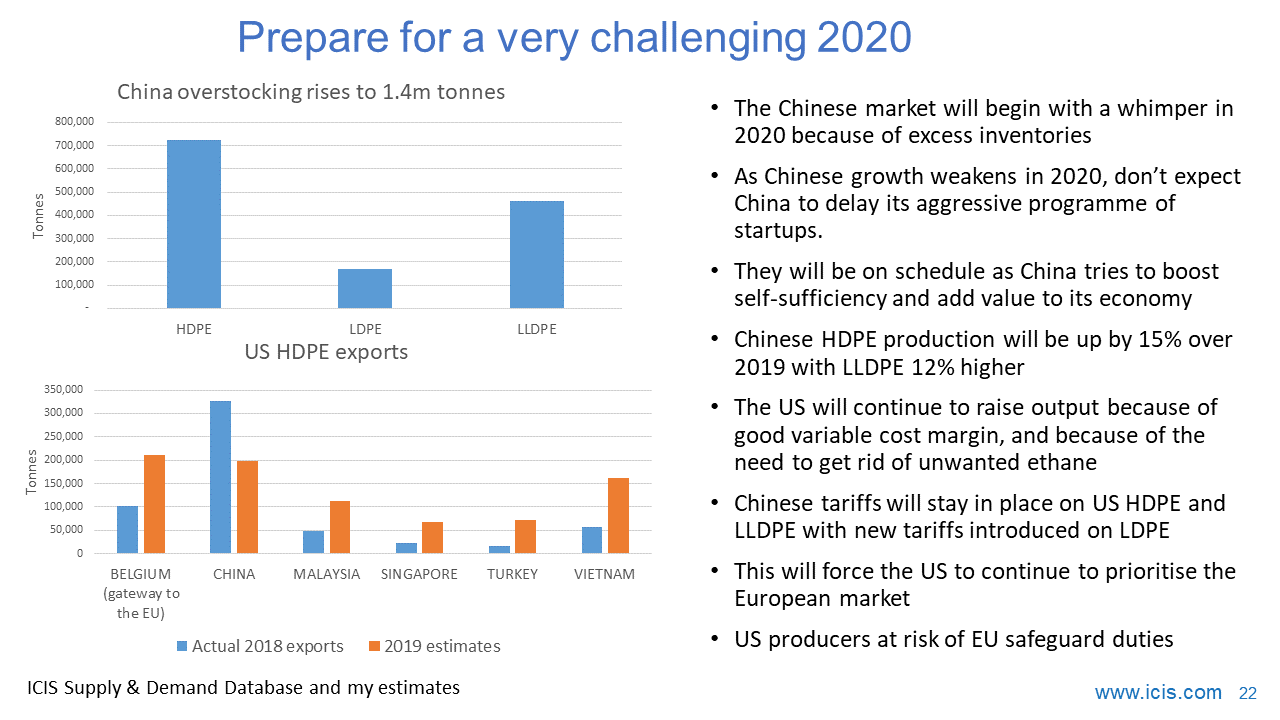 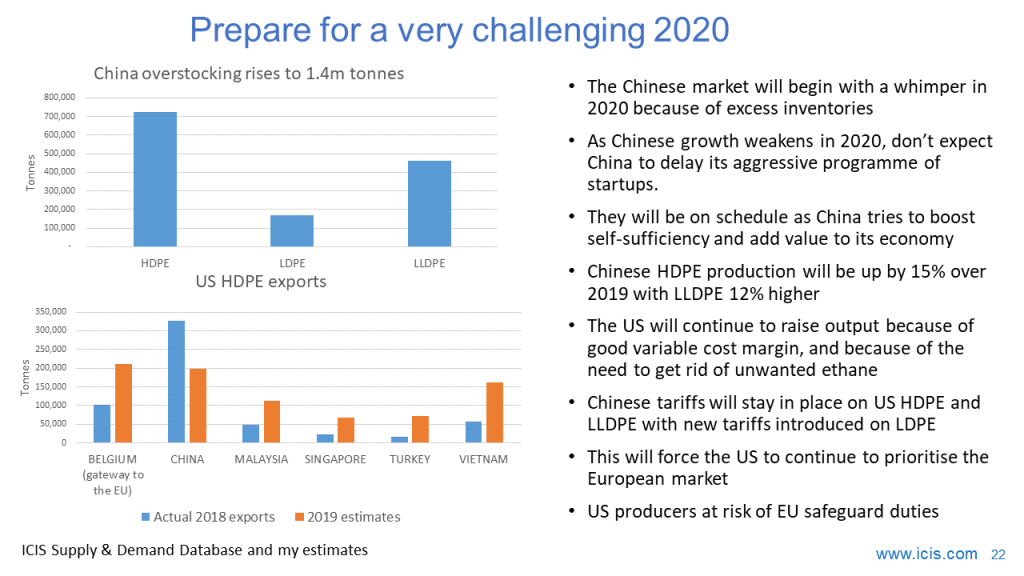 CHINA’S polyethylene (PE) market will start 2020 with a whimper because of exceptionally high levels of overstocking, which is a reflection of growing global oversupply.

As the Chinese economy is undergoing a gradual slowdown, there is nothing out there which indicates that actual growth will be above our estimate. This implies that January-October overstocking amounts to around 1.4m tonnes, up from 1.1m tonnes in the January-August period.

Business will thus slow down over the next couple of months because of overstocking and because the Lunar New Year falls on 25 January in 2020, earlier than this year when it took place on 5 February.

The weakness in the China market during the final months of 2019 and into 2020 will add further downward pressure of Asian naphtha-based variable cost PE margins, which are already at their lowest levels for at least five years.

Margins will continue to decline in 2020 as the global economy further decelerates. The single biggest factor behind this slowdown will remain the long-term structural slowdown in the Chinese economy as it moves into an era of lower and more sustainable growth.

Do not expect any major operating rate cuts in Asia, and certainly no permanent shutdowns of any of the region’s crackers. No cracker is an economic island. Wider economic considerations will ensure that crackers will continue to run pretty hard, even if margins remain deeply negative.

Meanwhile, big increases in Chinese PE production will go ahead as scheduled despite poor profitability and local demand growth that falls short of our base-case forecast.

There are two reasons why China will press ahead with its capacity additions. Firstly, China will want to maximise its PE self-sufficiency because of what has become a very uncertain international trading environment, courtesy of the US.

Secondly, its new PE capacity is mainly state-of-the-art, part of very modern and highly integrated refinery-petrochemicals plants. Running these plants at high operating rates will be a great way of adding value to its economy as China tries to escape its middle-income trap by moving into higher-value manufacturing.

As for 2020 demand growth in China, we see consumption across the three grades rising by 6.6%. This would leave demand by the end of next year at 35.3m tonnes.

You should instead budget for growth more in the region of 5%, leaving demand at 34.8m tonnes. This would only be a shortfall of some 500,000 tonnes. But think of the second, third and fourth-order effects.

Lower-than-expected Chinese growth will have a ripple effect across the rest of the world. Asia & Pacific growth will also undershoot expectations by around 1.6 percentage points because of the very close economic links between China and Asia & Pacific. The effect on PE growth in the rest of the world will be more muted as the economic links with China are not as strong.

In total, global demand will be several million tonnes lower than our base case.

US exports will continue to increase

New US PE capacity will come on-stream on schedule despite the weaker global growth environment and despite Chinese trade-war tariffs on US HDPE, LLDPE and LDPE imports remaining in place.

Donald Trump has indicated that he is quite happy to wait until after the next Presidential Election to try and reach a trade deal with China, and so don’t expect even a temporary truce in trade hostilities in 2020.

This will leave Chinese tariffs on US HDPE and LLDPE imports at 36.5% (30% imposed as part of the trade war along with 6.5% existing duties). China will also carry through with its threat to levy 10% additional duties on US LDPE, leaving its total tariff at 16.5%. The LDPE duties are due to begin on 15 December.

Disappointing global growth will make it harder for the US to place its new volumes. A further problem is that if the US wants to avoid the heavy Chinese tariffs, it will have to once again heavily focus on smaller export markets such as Europe, Turkey and Southeast Asia. Local producers might end up responding by applying for and winning safeguard duties against US imports.

But, as I said, don’t expect any delays. What’s important to understand about the US PE business is that compared with the natural gas business, it is small potatoes. Natural gas is a far bigger revenue generator for the PE producers integrated upstream into natural gas production.

Natural gas producers have to get rid of large quantities of unwanted ethane in order to pipeline specifications. Only small quantities of ethane can be left in the methane that’s delivered to power plants for electricity generation and to people’s homes for cooking and heating.

Ethane can’t be flared for environmental reasons and on the only downstream use for ethane is in steam cracking.

And whilst US PE margins are bound to weaken in 2020, on a variable cost basis at least they will still be positive – even if returns to investors are way below what has been promised.

LLDPE exports will remain unchanged at around 4.5m tonnes on only a 1% increase in local production versus a 3% increase in domestic demand. But this should be placed into the context that as recently as 2017, US LLDPE exports were just 2.2m tonnes.

It is not only in China and the US where capacities will increase substantially in 2020. Also consider increased operating rates at the Petronas/Saudi Aramco HDPE and LLDPE plants that have just come on-stream. The Russian Federation will see a big increase in HDPE and LLDPE production. The net results will be as follows:

Don’t be surprised if by the end of next year, the EU has placed supplemental import tariffs on US PE cargoes. The tariffs are most likely to take the form of safeguard duties, as these duties can be imposed under World Trade Organisation rules if it can be demonstrated that an unexpected rise in imports has caused damage to local industries.

The big surge in HDPE and LLDPE shipments probably falls into the area of the unexpected because it has occurred in parallel with a sharp decline US exports to China, in response to the tariffs. US HDPE exports to China are on course to be 40% lower in 2019 than last year with LLDPE 20% lower.

Without the tariffs, the US would have shipped much more HDPE and LLDPE to China, thereby reducing the pressure on the EU. US LDPE shipments to China are in line to be 150% higher in 2019 because, as mentioned earlier, US LDPE to China right now carries no trade-war tariffs.

The EU will also move closer to imposing carbon tariffs on all types of imports as it implements its Green New Deal, but probably won’t get around to imposing the tariffs. This is another risk for the US PE industry given the carbon emitted during long distance shipping and the greenhouse gases generated from natural gas production.

With or without duty safeguard duties, I don’t see European crackers shutting down to make way from US imports. Whilst Northwest European integrated naphtha-base PE margins are sure to decline from today’s comfortable levels, as in Asia no European cracker is an economic island. The wider macroeconomic damage of shutdowns will prevent them from happening.

Crackers in Europe are also fully depreciated and so carry no investment debt, are well integrated with local refineries and have good ethylene and propylene pipeline systems.

Conclusion: All the way to the bottom

As nobody is going to shut down old plants, and with most if not all new plants coming on-stream on schedule, there seems to be only one outcome: Further major margin depletion in Asia, Europe and the US.

How bad will it get? As I said on Friday, this not a normal downcycle. This is instead a major paradigm shift in the global PE business which requires an entirely new business model.

At some point margins will bottom out, probably at 20 year or more historic lows. But by then the Winners under the new paradigm will have already started compensating for their losses through innovation in redesign of PE end-use applications and through investments in recycling.