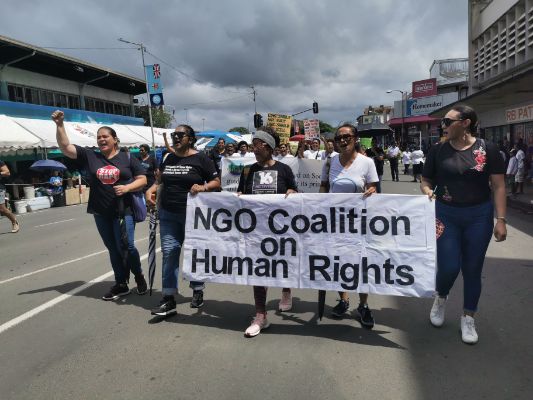 Hundreds across different diversities marched in the streets of Suva today as part of the annual Human Rights Day march. Human Rights Day is observed around the world on 10 December to mark the anniversary of the day the UN General Assembly adopted …

Hundreds across different diversities marched in the streets of Suva today as part of the annual Human Rights Day march.

Human Rights Day is observed around the world on 10 December to mark the anniversary of the day the UN General Assembly adopted the Universal Declaration on Human Rights (UDHR) in 1948. World Human Rights Day also marks the closing of the 16 Days of Activism against Gender-Based Violence.

The march culminated with a rally at the Sukuna Park where the NGOCHR member partners shared their solidarity statements.

“We are demanding respect for women’s rights, children’s rights, LGBTIQ rights, the respect for the environment, the workplaces we’re working in, advocating for equal pay for an equal value of work. We’re talking about safe workplaces, safe streets, safe homes and a safe Fiji for all of us. We want a Fiji where we have all our human rights protected,” said the NGOCHR Chair Nalini Singh.

“Whenever we see injustices, whenever we see violations, we must always report and hold those to account who are violating these rights. Not just in Fiji but in our region and the world because we don’t live isolated lives. We are all interconnected.”

The NGOCHR was formed on the 50th Anniversary of the UDHR and has continued to promote and protect human rights, justice, democracy and the rule of law in Fjii for over 20 years. The march is organised annually by the NGOCHR to highlight, celebrate and advocate for the protection of Human Rights in Fiji.
Fiji Women’s Crisis Centre Stephanie Dunn said it was an important moment to remember and be in solidarity with all those whose human rights have been violated.

“Everyone must have a voice. When a friend of yours is violating a human right, even someone you may not like, we must speak up. Silence creates an enabling environment for perpetrators to continue to violate human rights. Somebody’s life is everybody’s business.”

femLINKpacific Executive Director Susan Grey said it was important to remember the women that were not able to march, whose voices need to be heard, particularly those that have suffered through the pandemic and will be further affected by the upcoming cyclone season.

“We call on the leaders to stop being in a bubble. This is the time for empathy, compassion and to look at the greater picture where all human rights are respected,” she said.

Social Empowerment and Education Executive Director Chantelle Khan highlighted a worrying concern with the increased police brutality cases that have been reported. She paid tribute to recently passed Ilaisa Batai who was an avid advocate within the spaces he worked in. Unfortunately, Batai passed away without receiving justice for the police brutality he faced.

“We’re marching today to make a statement that we all believe in, that all human rights must be protected. It takes a lot of courage to march in the streets in Suva,” she said.

NGOCHR observer Haus of Khameleon’s Miki Wali added, “We cannot sit in the comforts of our homes and watch our citizens be brutalised by the very people that enforce the law. It is inhumane. People are dying. When we talk about human rights, we speak for ALL human rights.”

NGOCHR observer Pacific Network on Globalisation’s Lice Cokanasiga said,
“It’s important to keep an eye out for our regional brothers and sisters. This year is important because it marks the 75th Anniversary of the United Nations and at the same time we must remind them that the people of West Papua are still fighting for their Independence 59 years on.”

Members of the public and partners were also invited to share the space as they highlighted human rights issues of concern.

“Today is the day for human rights but we hope that every day becomes a day to promote, protect, respect human rights not just for ourselves but for everyone around us,” said Ms. Singh.