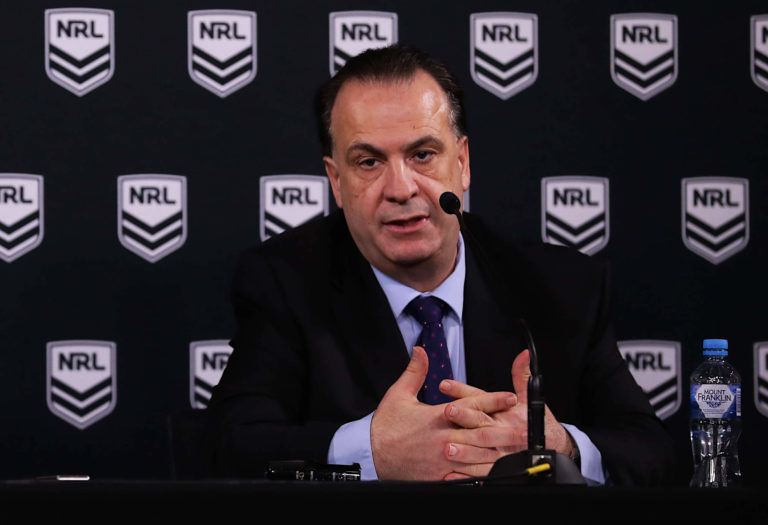 He has been heralded as a great saviour of rugby league but as time goes on Peter V’landys is clearly showing he is out of touch and losing the battle of the Australian football codes.

AFL and Rugby Australia have not been as outlandish and brash in trying to create statements in the race to return to footy.

One thing for certain: in the wash-up of trying to get back on the field first, the NRL only provided one game of reasonable ratings and beyond that it is back to normal in the ratings war.

A quick look at a health check over the last few months in Australian sport for the three major codes indicates this.

The NRL has been clearly beaten by the AFL in renegotiating a broadcast deal and clubs are heavily reliant on leagues clubs and are in huge financial strife.

Having been promised the same salary cap in 2021, it seems the next tier of the game could be in for a long decade with dwindling participation rates and heading in the direction Rugby Australia had been heading without the international markets to provide economies of scale.

With a heavy reliance on Sydney clubs and no national sense in the sport, it looks like long days ahead for the NRL.

The AFL have stood back in this whole drama and while they may not have beaten the NRL to the punch, they have more financial clout and an ability to pull on great market force than the NRL. The crowds are bigger and they have more supporters purchasing memberships.

The AFL, as per any organisation, will not get back to normal for two to three years but the years will be prosperous after this. They are savvy and do not overspend. They also invest from the bottom up.

They have grassroots clubs nation-wide that are ironed on and will remain the heartbeat of the game nationally.

Some positive signs have come from rugby union in the last month with the appointment of new chairman Hamish McLennan.

Rugby union looks like reverting to an international season that collaborates with the other nations around the world. The Wallabies are a major brand well known around the world and Rugby Australia will leverage this to get them out of trouble.

Operating the game without private investment has been realised as a major mistake and the injecting of capital funds will enable Rugby Australia to deliver much needed funds to grassroots club, who at a Shute Shield and Brisbane club rugby level are thriving.

Combine this with a Rugby World Cup in 2027 and a British Lions tour in 2025 and a willingness to change laws will mean rugby advances itself back to number two behind the AFL by 2027.