A Vacuum in a Shroud of Stars: ‘Intergalactic Touring Band’, 1977 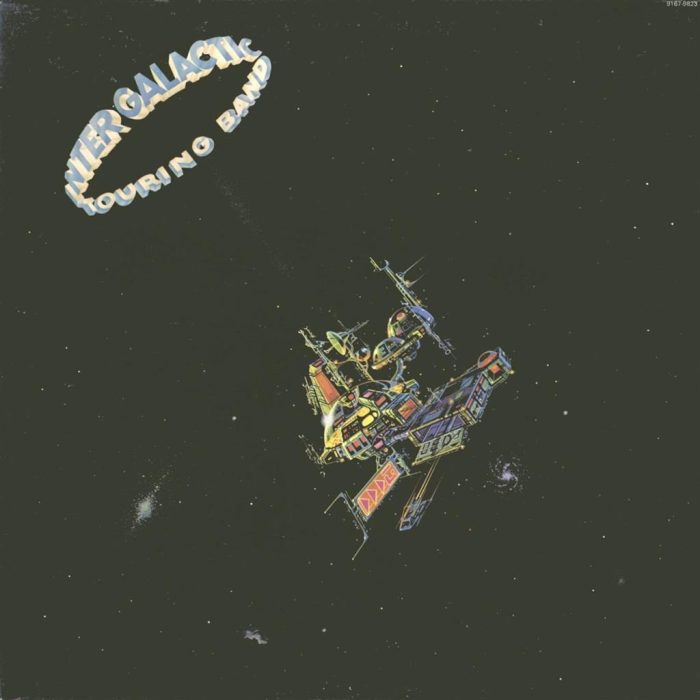 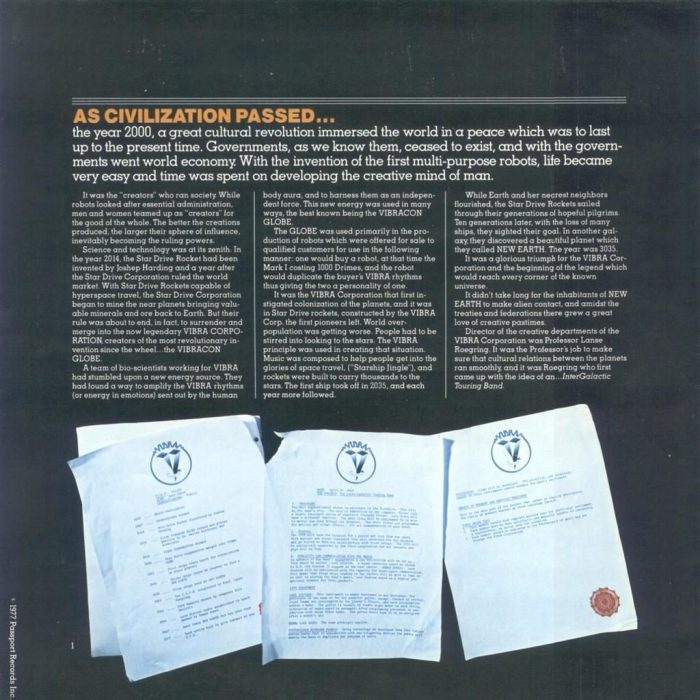 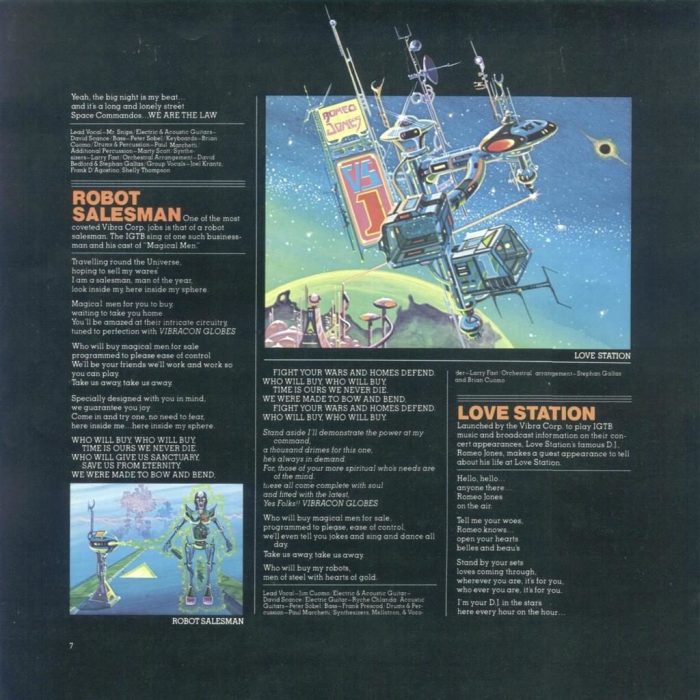 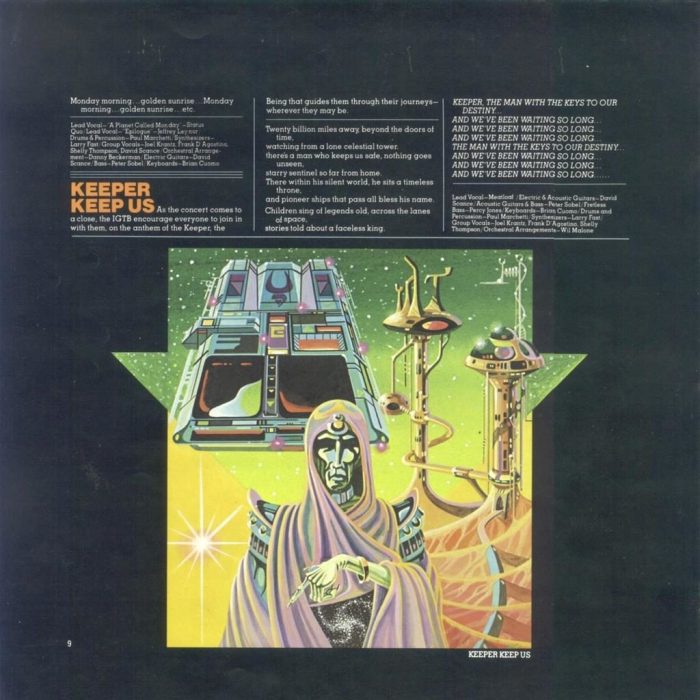 What the hell was The Intergalactic Touring Band? On paper it was a zeitgeist-propelled self-indulgence of the most egregious kind: a distended 1977 concept album that sits on the continuum of guest-heavy conceptual LPs running from things like Rick Wakeman’s 1974 Journey to the Centre of the Earth and the soundtrack of the 1975 film version of Tommy to what was perhaps the genre’s defining moment, Jeff Wayne’s 1978 War of the Worlds (though Wayne’s legacy had already been ratified with his jazzed-up cover of the Star Trek theme). Like the glossy coffee table books that were their papery analogue, concept LPs were ten a penny throughout the 1970s, but Intergalactic Touring Band—not actually a band but the name of the album and concept—stands out as a particularly confusing example, as well as a perfect exemplar of that hackneyed trope, “this is why punk had to happen.”

Quite how the enterprise coalesced is anyone’s guess: it was written by two jobbing songwriters and producers, Danny Beckerman—ex of Fortes Mentum and Pussy—and the prolific Wil Malone—whose immense oeuvre included a 1970 solo LP, the electro-sleaze soundtrack of Death Line, and string arrangements for prime Black Sabbath. Both very talented types, but from the perspective conferred by the passage of several decades, Intergalactic Touring Band‘s gibberish plot sounds like the product of a particularly stoned and sloshed afternoon spent assembling a fix-up of unused songs. Despite the odd touches of Hitchhiker’s Guide to the Galaxy-esque satire in its story of corporate multi-generational space colonization, the sleeve notes only underline this sense of late-hippy half-arsedness (as contrasted with, say, the committed sci-fi of something like Paul Kantner’s Blows Against the Empire).

The indistinct line that a site like We Are the Mutants walks means that accusations of nostalgic indulgence are ever at the door, so let me put my cards on the table and state that I’d rather cave in my own face with a Pet Rock than listen to Intergalactic Touring Band again. If this kind of music is up your street, more power to you, but I will be staying in another fucking street. I like plenty of inexcusable and execrable shit, but I have no patience for this stuff, which feels like it joylessly brings together all the most annoying things about its various contributing styles to create something less than its composite parts—and much less than the individual omnia operas of practically everyone who contributed to it.

Musically speaking, it makes for an instructive comparison with something like Hawkwind—look at, say, the cosmic divide between the stodge-rock of Intergalactic Touring Band‘s Silver Lady and the visionary delirium of the Hawklords’ The Awakening—or with ELO’s Time, another nominal SF concept album from a few years later: there is an abyss of quality. This despite being recorded by what might charitably be called an insane ensemble of musicians and singers including Ben E. King, Rennaisance‘s Annie Haslam, Clarence Clemons, Rod Argent, Bruce Springsteen, Arthur Brown, Meatloaf, and Rick Parfett and Francis Rossi from Status Quo—all of whom come lurching out at the listener like some Frankenstein’s-monster record collection come to grotesque life. The amount of money and (presumably) effort that went into the realization of something so pointless, uninspired, and un-cosmic is staggering—and to do it the same year a talented British expat was creating something beautiful out of the same celestial materials on a shoestring just adds insult to injury. It’s even more annoying given that the roster of talented artists performing includes synth luminary Larry Fast who, as Synergy, produced a string of wonderful synth LPs, as well as the soundtrack for 1982’s The Jupiter Menace. Yet despite sitting at the junction of so many of the strange currents of its day, and despite a clever advertising campaign in the music press, Intergalactic Touring Band goes nowhere and has nothing to say. Everybody involved in it did far better stuff elsewhere. In short, everything about Intergalactic Touring Band is great, except for the Intergalactic Touring Band.

Was ever concept more divorced from execution? Because the pedestrian nature of Intergalactic Touring Band‘s contents only serves to highlight its dissonance with the concept’s beautiful packaging. I know, it feels absurd—and even slightly grotesque—to look at something’s packaging, as opposed to the creative undertaking the packaging supposedly serves to present, as being its true artistic heart. But in this case—and in plenty of other cases too, if we’re honest—it’s true. Intergalactic Touring Band as concept is brought to life through the beautiful artwork of Larry Ortiz, a Vietnam veteran who later enjoyed a career as a visual effects designer and was an original member of the International Association of Astronomical Artists. As ever, cash-ins create accidental beauty, and that accidental beauty, care of the unknown Ortiz, is the abiding artifact here.

A Vacuum in a Shroud of Stars: ‘Intergalactic Touring Band’, 1977