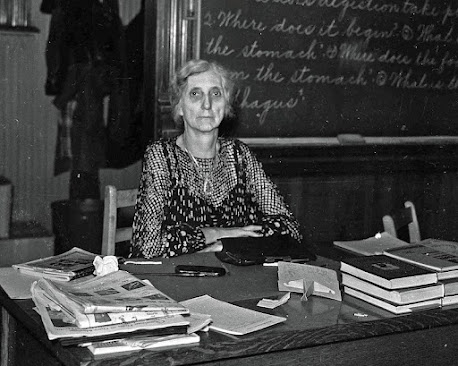 I don't know how or why I earned the reputation of being a grammar stickler.
I mean, I am. But I'm not an a-hole about it.
People think I'll correct them, so they self-correct their language like I'm silently judging them when they say "further" instead of "farther."
Look, I'm not the grammar whisperer. I just like knowing things about language. I like learning about the history of a word or a name.
I like saying, "The English language is an ever-changing tapestry," whenever someone complains about how the meanings of words are changing. Our language is changing all the time, not just the parts you don't like.
I like it when people say, "Why can't we just go back to the old days when people used words correctly?" because I get to have a little fun with them.
How far back are we talking about? I ask them. Do you want to go back to the late 13th century, when "nice" meant simple, stupid, and foolish? If you say, you want to go back to "the old days," be careful what you wish for.
"Well, now you're just being silly."
Oh, thank you very much. Because in Old English, "silly" meant happy or blessed.
So I'm not so much a grammar stickler, just an enthusiast.
(I would say I'm an aficionado, but I have trouble spelling that word — I had to look up how to spell it just now.)
I even like sharing little grammar tidbits on my Twitter and Facebook feeds once in a while, like "The word 'OK' is the older, more correct version than 'okay.'"
But I also like to complain about how English is changing for the worse because of stupid things like how "literally" now means "figuratively."
Like, "I could literally eat a horse," now means you only want to figuratively eat a horse, not that you could truly eat a real horse.
The English language may be an ever-changing tapestry, but it's also dumb. I only like it when the language changes to suit me. When it's something I disagree with, everything about it is dumb and wrong.
Somehow, this love of language and grammar has gotten me labeled as a grammar stickler, but nothing could be further from the truth.
Unless you're one of my kids, I don't correct people during a conversation. That's rude.
"Mr. Deckers, I hereby sentence you to serve no fewer than five years—"
"Less. No less than five years."
"Now it's seven, smart guy."
One of the problems with being a grammar enthusiast is that other people get self-conscious and correct themselves when I'm talking to them. Like when you find out the person you've been chatting with at the backyard barbecue is a pastor. You sit up a little straighter, try to look beatific, and inwardly cringe because you just said "a-hole" 488 words ago.
This leads to a lot of uncomfortable pauses in the conversation as you desperately try to remember stories that don't start with, "This one time, I was so drunk."
But I don't want that. I don't care if people misuse grammar. I don't even use proper grammar all the time, mostly because I don't know all of the rules. And I couldn't diagram a sentence if you pointed a gun to my head.
At. At my head. (See?)
AlthoughI can explain why you're allowed to start sentences with a conjunction, like "and," "but," and "or," which I do to irritate English teachers.

I remember this was absolutely forbidden by my 7th grade English teacher, Mrs. Clovenhoof.
Mrs. Clovenhoof was a mean and nasty person who delighted in being cruel to her students, belittling us and criticizing us at every opportunity. She took joy in embarrassing us in front of the class at every turn.
I call her Mrs. Clovenhoof because if I say her real name, she'll appear in a burst of brimstone and make me conjugate verbs.
But I don't get my grammar enthusiasm from her. In fact, she nearly killed it. If anything, I decided to learn better grammar to spite people like her. She was one of those grammar pedants who blindly followed the rules they learned in middle school, even though most of them were outdated, wrong, or should have never been rules to begin with.
Like ending your sentences with a preposition. That was a rule incorrectly created at the start of the 18th century, and the people who hold you to that rule are completely wrong.
Or starting your sentences with conjunctions because it's now so commonplace, you can't escape it.
That's part of "The English language is an ever-changing tapestry" thing. It's like a Get Out Of Jail Free card. I can wave it at grammar pedants who insist on sticking with the old rules that have changed or died.
The great thing about being a grammar enthusiast is not correcting people's grammar mistakes.
Rather, when people try to flex on me with their 7th grade English class rules, I can just smile and say, "Oh, that's nice."

My new humor novel, Mackinac Island Nation, is finished and available on Amazon. You can get the Kindle version here or the paperback version here.