FAMINE, pandemics and war are known to change humanity forever.

They bring unimagined conditions which change norms as history unfolds.

Although science is progressively trying to beat back the virus through vaccines, it is becoming apparent that Covid-19 may still be with us for some time.

As the world begins to negotiate its way around the fallout from this global health crisis, there are growing questions if there will be a return to the good old days.

The coronavirus has had a socio-economic toll that will take a long time to heal.

Family bonds were tested and incomes were affected.

However, while the past few months have been relatively calm, talk of a third wave of the pandemic is likely to send shivers down the spine of those who keenly felt the pain of previous lockdowns.

Mrs Elizabeth Deliwe Siyapi (59) of Nhema Village in Ward 11 in Shurugwi has not seen any of her children since the beginning of the Covid-19 pandemic.

Some are in South Africa, while others are in different cities across the country.

Not seeing her children has brought a social cost, which weighs heavily on her psyche.

“With the way people have been dying, I am always on my knees praying that the heavens keep them safe. Every time I hear that there are rising cases, I am in a state of fear because I do not know the extent of the spread,” she told The Sunday Mail.

Basic commodities have become luxuries for her as the coronavirus affected her source of livelihood.

“I went for close to seven months without tasting sugar. My children would tell me that they have groceries for me, but there were complications with getting them here. Even basics like soap ran out; we had to improvise but it was far from easy.” 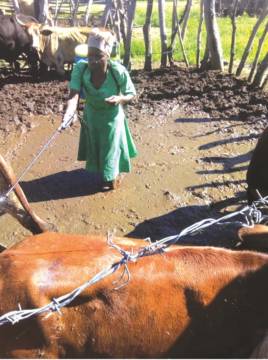 She, however, remains in touch with them and their talks are therapeutic.

Being a matriarch, there are roles expected of her.

“I have three grandchildren who were delivered during the lockdown and I am yet to see them. I cannot travel because the borders are closed and we cannot afford airfares,” she said.

She hopes vaccines will bring back a semblance of normalcy to allow her to reconnect with those she holds dear.

“There were funerals that I did not attend. I am yet to go and give commiserations. I am now feeling bad. Even my mother-in-law whom I used to send groceries to from time to time must be thinking that I have forgotten about her.”

Even the cropping season was not as seamless as it used to be as people were reluctant to gather.

Mrs Siyapi added: “We have WhatsApp groups that we formed, where we would work together, helping each other whenever tasks emerged. We would use the platform to mobilise for what we call ‘Humwe’. We would go to each other’s fields as a team and complete huge tasks in a single day, but this was impossible this time around because everyone was keeping to themselves as precaution.

“I was alone with my grandchildren during the harvest season and I lost crops. I could not do it fast enough and people started letting their cattle wander, assuming that everyone had harvested. I lost my nyemba and orange maize. Only my sweet potatoes were saved because the tubers are underground.”

Having gotten her vaccine recently, she believes that if more people were to be inoculated, there could be a return to normalcy in no time.

In Glen View 3, Harare, 65-year-old Gogo Jane Hombarume has had a different but related experience since the outbreak of the coronavirus. Like Mrs Siyapi, she has had her nurturing role as a grandmother limited to digital spaces, where she has had to send love to her children virtually.

“We were confined to our homes, my children are overseas and we could not visit them like we used to do. It has been difficult in my case, as one of my children is a preschool teacher and when schools were closed in South Africa, she was in a tight spot. At one point she contemplated coming back to Zimbabwe,” Gogo Hombarume said.

She stays with grandchildren from her seven children who live in different cities.

“We use WhatsApp video calls and voice notes to catch-up. It is not the same but it’s some consolation,” she said, explaining why she stopped her children from attempting to return home.

“Travelling during Covid-19 has been hectic from what we hear; I did not want a situation where my children would travel back and be quarantined for two weeks, risking contracting the disease at the facilities,” she said.

Being a cross-border trader, her income was affected.

“I had been a cross-border for more than 20 years, then Covid-19 came. I could no longer travel and decided to stop. I think I have done my best. I finished five passport booklets. I would travel to three countries in a week during my peak. I need to rest now and take care of my grandchildren.”

Now, she survives on a small stall she has at Glen View 3 shops.

“When the informal sector was also closed and people needed letters to move around, it was hard for us to operate. Things were tight, we survived on the good heart of well-wishers like Cde Offard Muchuwe (ZANU PF Shadow Member of Parliament for Glen View South), who would donate groceries,” she added.

Gogo Hombarume, who recently got her vaccine, prays that the uptake increases so she can be reunited with her family, which she has not seen in more than a year.

“Since Covid-19 started, I have not been able to see my elder sister. I am still apprehensive of travelling. If you go to people`s neighbourhoods, they treat you with suspicion that you may be bringing the virus.”

In her spare time, Gogo Hombarume now explains to people in her neighbourhood, especially her age-mates, the importance of getting the vaccine. Her prayer is universally shared as people yearn for a return to normal.