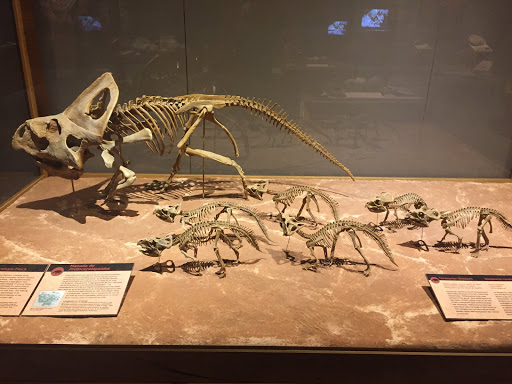 The Academy of Natural Sciences recently had a seasonal exhibit showcasing dinosaur babies and eggs, called "Tiny Titans".  I was fortunate enough to be able to walk through it a few times and take photographs.

I was pleasantly surprised to see that this exhibit has a lot of full skeletal mounts of dinosaurs, often posed with young or on nests.  The first one you meet when you come in is of the small ceratopsian, Protoceratops flanked by several youngsters.  Protoceratops was almost always depicted as guarding a nest of eggs in popular media and art.  Ironically, the eggs that we thought belonged to it actually came from a different dinosaur, Oviraptor.  Since then, however, we have found actual Protoceratops eggs and babies as well.


Speaking of nests and Oviraptor, what kind of eggs and babies exhibit would this be without oviraptorosaurs?  The exhibit sports a beautiful life-sized cast of a fossil nest from what was a truly massive oviraptorosaur, judging by the shape of the eggs and their placement.  We know this kind of dinosaur laid eggs in pairs, and in a ring pattern so the parent could safely sit in the middle and cover them with its arms.


There is also a great skeletal mount of Conchoraptor, in a brooding position.  It was exciting to see an oviraptorid that wasn't Citipati showcasing this for a change.


There was a case showcasing a dinosaur egg (from as sauropod judging by how perfectly round it was) that had turned into a geode.  Silica had gotten inside the egg through the porous shell during the fossilization process and formed beautiful crystals on the inside.  I had no idea that could happen to a dinosaur egg.  It was neat to see.


Another really cool feature about this exhibit was a station where the visitor could look at fossilized embryonic titanosaur skin under a powerful magnifier.  I love a good sample of fossil dinosaur skin.  They are so rare ans so precious, especially for paleoartists!


This exhibit also featured several skeletons of the small ceratopsian, Psittacosaurus, which is known from many individuals on the fossil record, including babies.  There was a cast on the wall of what appeared to be an adult Psittacosaurus that had its body wrapped around thirty four baby Psittacosaurus.  All the skulls of the babies were above their bodies, which shows that they died very fast and they fossilized in their life poses.  Unfortunately it was found out in 2013 that the adult's skull was never a part of this fossil, and was glued on to make it more dramatic.  Also it was found out that the skull of the adult was from an individual that was too young to have had babies of its own when it died, so it couldn't have been the parent anyway.  That being said, this fossil is still proof that baby Psittacosaurus were at least gregarious in life, which is an exciting all on its own.


The last part of the exhibit has a stretch of life-sized images of famous dinosaurs, including Diplodocus, Maiasaura, Triceratops, Stegosaurus, and Tyrannosaurus, by paleoartist, Luis Rey.  In front of each of these dinosaur images was a small fence-like pen, with a roughly three to four foot model of  that dinosaur's "baby".  I could see they were going for a dinosaur petting zoo kind of vibe.  This part had potential to be really cool, since we actually do know a lot about the babies of those particular dinosaurs.  It would have been a great opportunity to show the proportional differences between babies and adults and how they would have changed as they aged.  Unfortunately that is not what was offered.  These "babies" were more or less poorly done, shrunken versions of the adults.


The Triceratops looked like it was kind of trying, since its horns were shorter, but it still didn't match what we know baby Triceratops looked like.  The Maiasaura looked more like a hypsilophodontid than anything else.  The "baby" Tyrannosaurus was the most offensive.  I think it was modeled after the Tyrannosaurus toy from the company, CollectA, which isn't even an accurate representation of an adult Tyrannosaurus, let alone a baby, which we know would have looked very different, with longer legs and an overall lighter build.  The kids in the exhibit seemed to be loving it, however, and it was a great opportunity for selfies...it was just a missed opportunity to educate without taking anything away from the fun.


Overall this was a cool exhibit.  It was a neat contrast to see so many tiny baby skeletons and eggs after looking up at the massive adult skeletons in the museum's main fossil hall.  There was also a lot of interactive and truly educational content for any age of visitor.  Unfortunately, Tiny Titans is no longer at the Academy of Natural Sciences, but it could pop up at another museum soon!