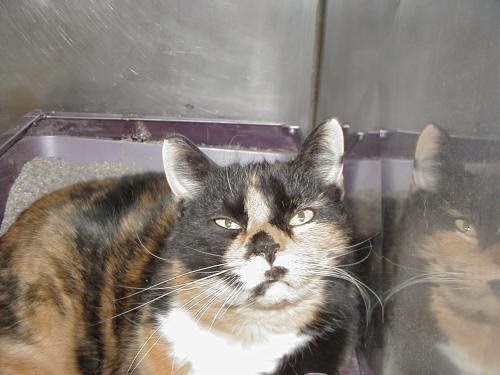 15 years ago today I brought Tara home. With the exception of the 6 weeks after she passed away before I adopted Truffles, and the month after I lost Truffles so unexpectedly before finding Mudpie, I've lived with a tortie for 15 years now. That's a lotta tortitude for one small house!

In honor of her Gotcha Day I thought it might be fun to share her PetFinder profile. I actually met her "in the fur" at the PetSmart adoption center before I went home and looked her up on PetFinder, which I'm really glad about because I don't think the posted pictures did her justice at all.
And yes, her name at the shelter was Kelly. My mom is the one who suggested naming her Tara because of our mutual love of Gone With the Wind... 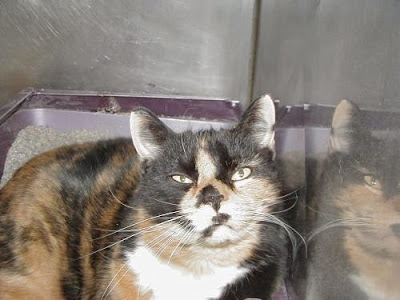 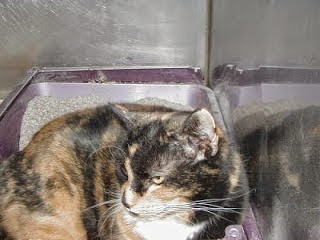 Kelly
Cat
Dilute Tortoiseshell Mix
Size: Large
Age: Adult
Gender: Female
Notes: Kelly is a beautiful short haired cat with a sweet personality. As you can see from her pictures, the coloring on her face is half black and half brown and is divided at the nose. She is a pretty big girl who loves to sleep (even in her litter box if it is clean). Kelly would like a home where she has a big bed to curl up on and a person to give her attention. Kelly sleeps through most anything except when another cat goes by her cage, for this she will even get up and tell the other cat to back off. Because of this Kelly needs to be the only cat in the household.
***********************************************
What has come to amaze me over the past few years is how much of Tara I see in Mudpie. Many times I even refer to Tara as Mudpie's "grandma" even though there's no way they could possibly be biologically related. They're built the same, they like sleeping the same way, they react the same to other cats, their coat is the same...so many similarities.
Tara was a middle-aged ladycat when I adopted her so we didn't have a lot of years together, but the memories she left behind will remain with me for the rest of my days.
Remembering Tara
Adopted May 20, 2007
Rainbow Bridge July 7, 2013
Source: mochasmysteriesandmore