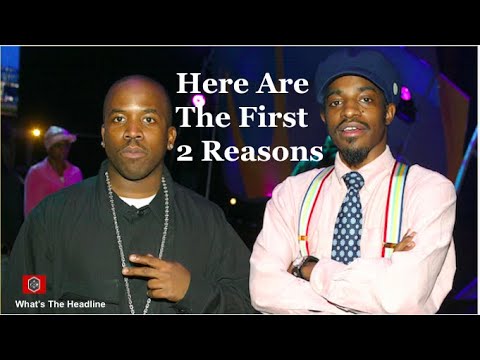 At Ambrosia For Heads, we celebrate Hip-Hop throughout the ages. Earlier this year, our What's The Headline podcast launched a series examining the calendar years that made the music and culture reach its full potential. After taking a loving look back at 1984, the next episode drops in on Y2K. At the onset of a new millennium, Hip-Hop showed that it was here to stay—and had some important new faces standing out within the crowd while some veterans took giant steps. This What's The Headline episode, clocking in at over 90 minutes (and available as video and audio below), looks at albums by OutKast, Eminem, JAY-Z, M.O.P., Ghostface Killah, Common, Reflection Eternal, and others. The conversation highlights pivotal moves by Nas, The Soulquarians, Alchemist, The Neptunes, Snoop Dogg, DJ Premier, and LL Cool J. As we look at crucial movements in the mainstream, the underground, and emerging cities and regions, the What's The Headline team makes a strong case for a year that may be under-sung in the annals of Hip-Hop. Make no mistake, Guru & Common Flow Over Classic Dr. Dre Heat On A Rare Freestyle From 2000 (Audio) Stay tuned for more years covered in the series. Here Is A Rundown of the Discussion: 0:00​ Intro 4:00​ The classic Hip-Hop albums that were released in 2000 4:40​ OutKast ends one of the greatest four-album runs ever 10:18​ Nelly releases a debut that would reach diamond status and put St. Louis on the Rap map 13:00​ JAY-Z releases his most underrated album 17:45​ Eminem releases the best album of his career 22:40​ Common makes magic with J. Dilla, DJ Premier and more on Like Water For Chocolate 26:32​ M.O.P. took a victory lap for smash mouth Rap 29:30​ The Soulquarians bring out the best in D’Angelo and Erykah Badu 36:10​ Ghostface Killah reigns supreme for Wu-Tang Clan 39:30​ Talib Kweli solidifies his eternal stardom without Mos Def 43:50​ What happened in 2000 that changed the direction of Hip-Hop 44:40​ Eminem starts a run that will make him the biggest artist of the decade 47:10​ OutKast stake their claim as the best artists of the last decade 48:10​ LL Cool J makes his case as Hip-Hop’s G.O.A.T. MC 50:45​ Nas reminds all of Queens’ place in Hip-Hop 52:10​ JAY-Z recruits Just Blaze, Kanye West, Beanie Sigel and more to solidify the Roc-A-Fella dynasty 53:10​ Snoop Dogg completely repositions his career and is still relevant 20 years later 58:13​ The end of an era for Death Row and No Limit Records 1:01:08​ The Rap songs released in 2000 that would define the decade 1:07:26​ Three of Hip-Hop’s greatest concert tours showcase all of the best aspects of Rap 1:12:50​ Why 2000 was a benchmark year for Underground Hip-Hop 1:19:00​ Napster changes the way we find and listen to music forever 1:25:34​ Several of Hip-Hop’s G.O.A.T producers have banner years in 2000 1:28:12​ Hip-Hop is great in several areas of the country in 2000 1:29:50​ Many Hip-Hop veterans have resurgent years in 2000 In 2000, M.O.P. Went Hunting For CD Bootleggers To Mash Out (Video) Ambrosia For Heads readers can catch regular discussions about the culture on our What’s The Headline podcast. Additionally, What’s The Headline has recent interviews with Pharoahe Monch, Prince Paul & Don Newkirk, Statik Selektah, Lyric Jones, The LOX, MC Eiht, Mobb Deep’s Havoc, Duckwrth, photographer T. Eric Monroe, and Lord Finesse. All episodes of the show are available wherever you stream your pods. #BonusBeat: Our previous What's The Headline episode praising 1984 as Hip-Hop's best year:
Source: ambrosiaforheads.com