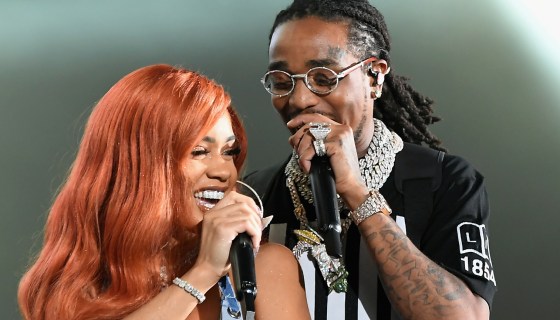 Here’s What Happened When Quavo & Saweetie Addressed Their Elevator Incident

We’re in the final stages of the Quavo and Saweetie saga that exploded when the once lovey-dovey couple got into an elevator altercation that immediately divided the internet.

As expected, Saweetie released a statement addressing the year-old tussle that continues to trend across social media.

“This unfortunate incident happened a year ago, while we have reconciled since then and moved past this… there were simply too many other hurdles to overcome in our relationship and we have both since moved on.”

Soon after Saweetie’s statement, Quavo released his own to TMZ.

“We had an unfortunate situation almost a year ago that we both learned and moved on from. I haven’t physically abused Saweetie and have real gratitude for what we did share overall.”

The messy breakup saga seemed to start with Saweetie’s appearance on Justin Laboy’s Revolt TV show “Respectfully” where she gave eyebrow-raising answers to spicy questions while still boo’d up with Quavo.

Many suspect this is what lead to their split while also suggesting that her appearance on the show caused the alleged fight between the Migos member and Justin LaBoy at Atlanta’s Buckhead Saloon.

While the fight rumors haven’t been confirmed, it’s clear Quavo and Saweetie are over and focused on upcoming ventures and album releases in 2021.

According to TMZ, the relationship may have been shaky long before things spilled onto social media where fans debated over surveillance footage of the struggle, which went down at an apartment complex in North Hollywood.

How do you think this saga ends? Do you think the LAPD will file charges? Tell us down below and peep the Twitter chitter-chatter over their statements on the flip.

Here’s What Happened When Quavo & Saweetie Addressed Their Elevator Incident