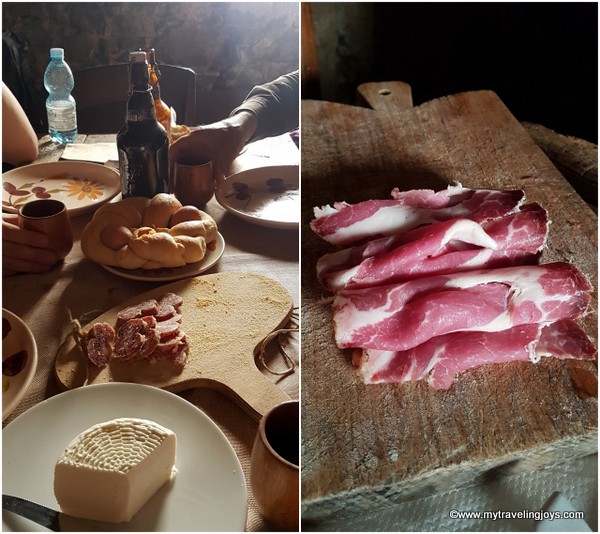 Hiking the Spectacular Path of the Gods along the Amalfi Coast

Imagine ever changing seas of steely grey to turquoise blue, dramatic clifftops and gorgeous greenery along the Amalfi Coastin Italy.
You can see all this and more when you choose to hike what is considered one of the most spectacular hiking trails in the world – the aptly named Sentiero degli Dei or “Path of the Gods.” The Path of the Gods is named after a mythological legend, which overlooks the path where Ulysses in Homer’s The Odyssey encountered the singing sirens that were on the island of Li Galli. 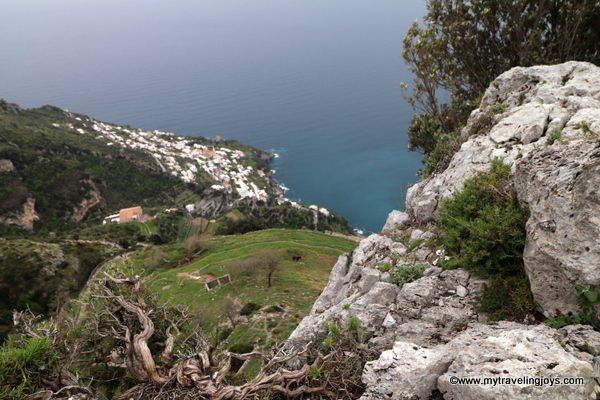 During the long Easter holiday weekend, we visited our cousin who is studying in Sorrento, Italy. He arranged our hiking tour of the Path of the Gods through a fantastic tour group called Sorrento Hiking. Now, normally, hubby and I aren’t big fans of organized tours, but our cousin’s mother had done the hike twice this spring so we trusted her opinion.
We were not disappointed. In fact, at the end of the day, I was literally blown away by how organized and knowledgeable our guide, Nino, a native of the Sorrento area, was. But I shouldn’t be surprised as Nino started Sorrento Hiking with a group of friends who enjoy hiking and showing people the lesser known and wild Sorrento peninsula. When someone has such passion for the Italian countryside as Nino, it shows.
Our hike began at the trailhead in the small village of Bomerano, a fraction of Agerola. The Sentiero degli Dei follows several routes and alternatives, but the most famous is the trail that leads from Bomerano to Nocelle (high above Positano). Nino picked us up in Sorrento and drove to Bomerano in about an hour, but by public transport, if you take the Sorrento-Amalfi line bus, you must transfer in Amalfi to the Amalfi-Agerola line, which takes about two hours. Since we only had a couple days in the Sorrento area, hiring a private guide made the most sense. 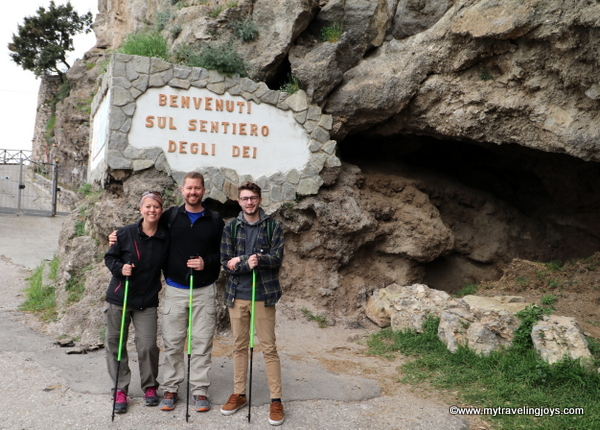 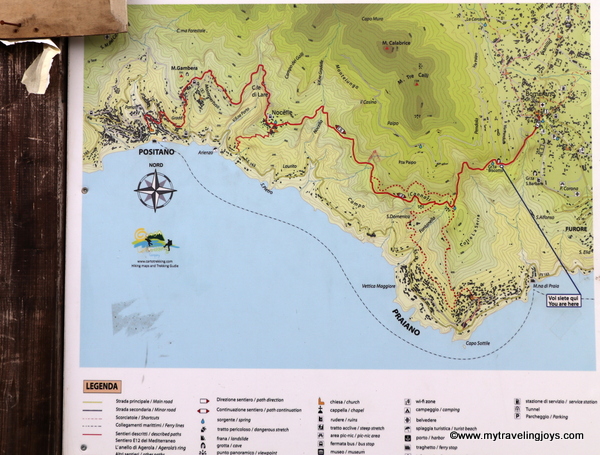 Though the grey skies threatened to rain at any minute, we set out on the rocky trail, which hugs the steep cliffside overlooking dozens of terraced farms and vineyards. The views over the Almafi coastlineare amazing! 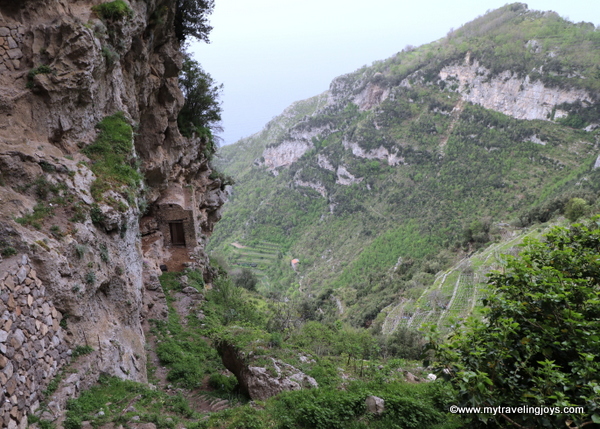 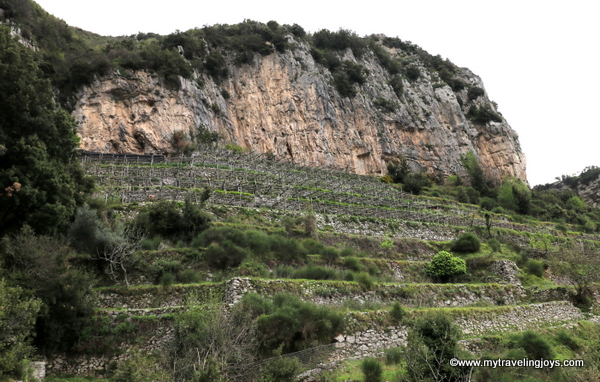 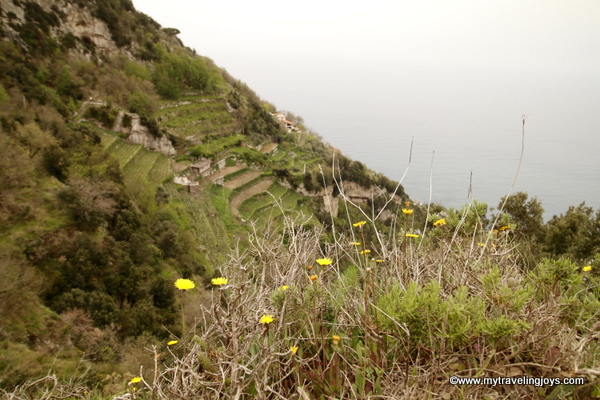 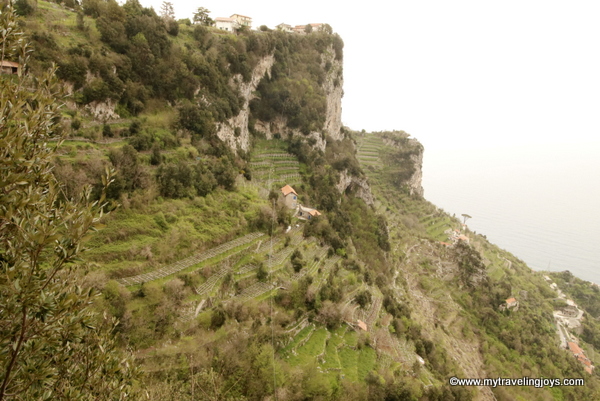 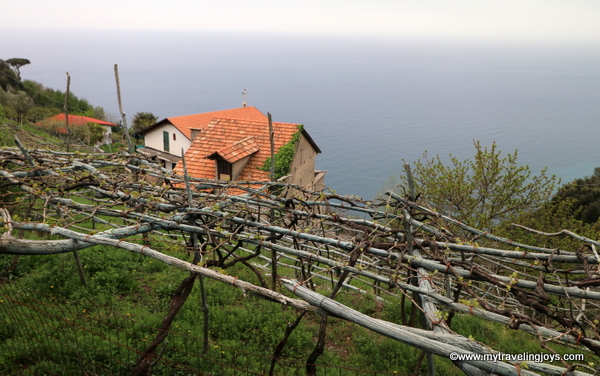 Abandoned Houses
As we hiked along the Path of the Gods, we saw many crumbling stone buildings which are the remains of old farm houses. Farmers along the Lattari Mountains used to produce grapes, lemons, olive trees and other local produce as well as raising goats. The area also was known for its production of silk from silkworms for hundreds of years until the unification of Italy in 1821. Nino explained that after World War II, some people just abandoned their homes high up in the hills for an easier life in town or for other reasons as you can imagine. 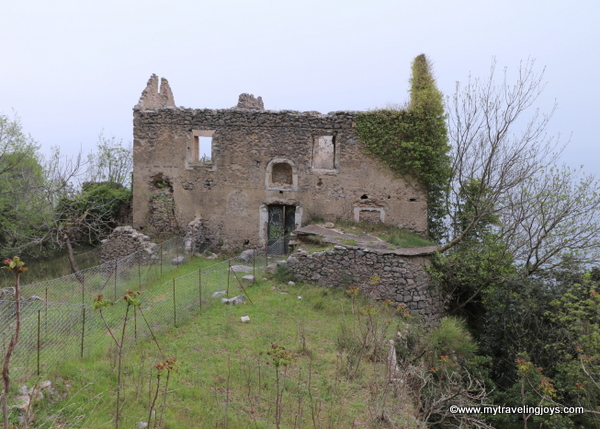 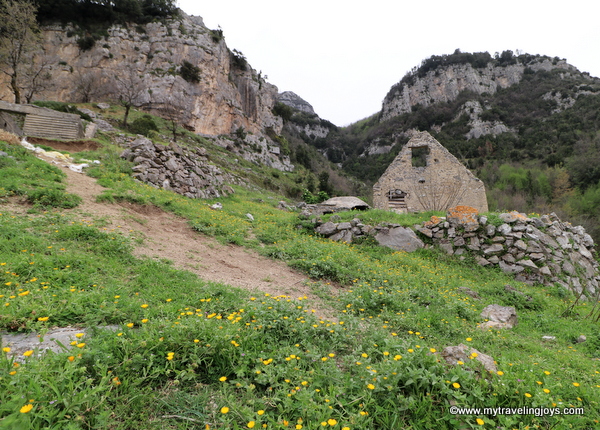 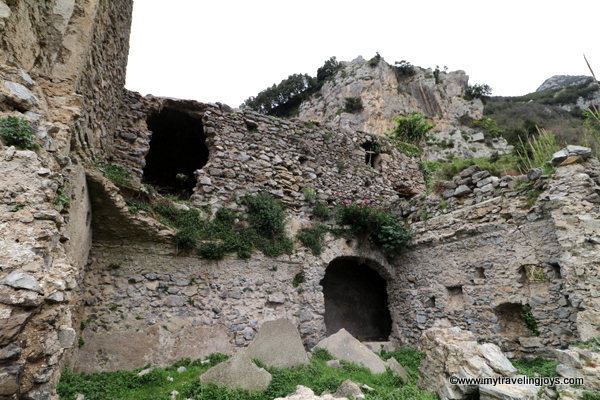 Can you imagine the hardships people must have endured to live up here?

Antonio’s Goat Farm and Lunch
But the hillsides are still alive today. One of the highlights of our hike was stopping at Antonio’s goat farm for a snack of goat cheese and homemade Italian salamis. Well that “snack” turned into an impressive spread of Italian Easter bread, charred bread dripping with local olive oil, fresh goat cheese (similar to a ricotta) and even homemade wine. Everything was so delicious, and the flavors even amplified knowing that everything was homemade. 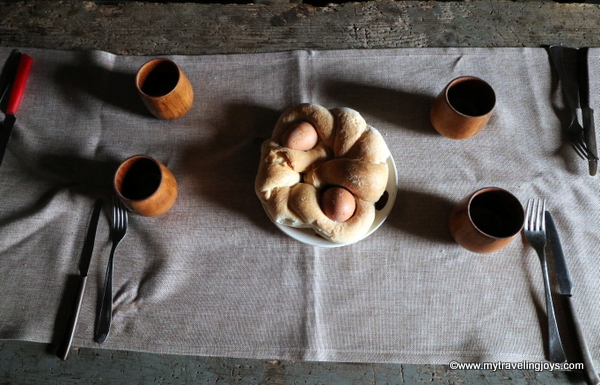 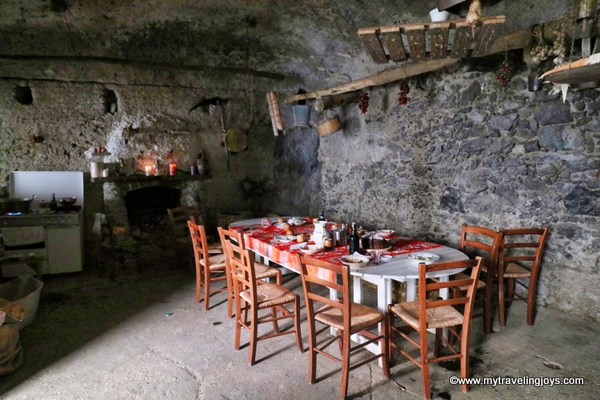 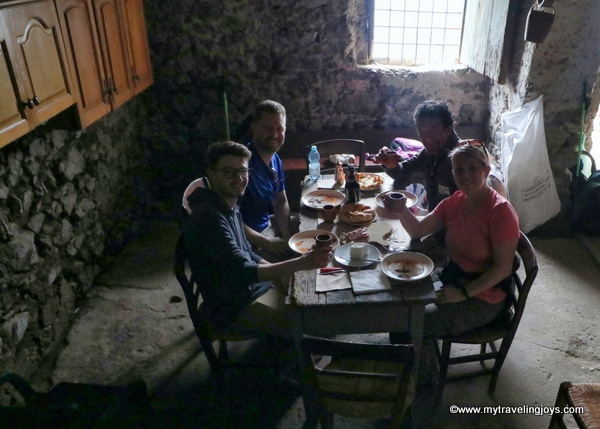 Antonio, a 30-year-old farmer, raises his 30 or so goats along the steep cliffs here high above the Almafi Coast. He milks his goats twice a day and makes cheese that he sells in the local villages. But like most farmers, he found it hard to make a living with this trade. He was about to give up until Nino and his business partners said, “hey, we’ll bring the people to you.”
Now, as part of the guided hikes with Sorrento Hiking, groups stop at Antonio’s farm to have a delicious snack and see the traditional way of life. There’s no electricity here, but that adds to its charm. I could just imagine setting up a tent here and spending a night on Antonio’s farm – an idea that I heartily recommended to Nino.

If you stop by, kindly leave a couple of euros to help cover Antonio's hard work and hospitality. 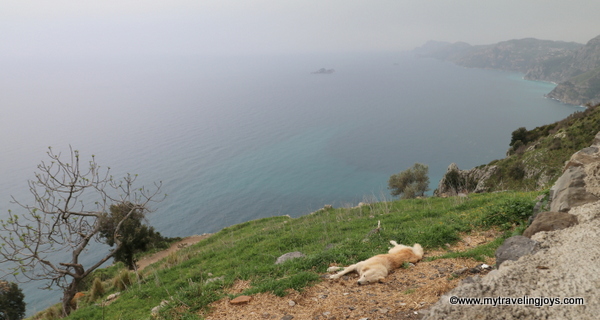 Wildflowers and Herbs
When you’re hiking with a native Italian, he is bound to explain the local flora and fauna. Nino served us up an edible buffet as we hiked along – several different varieties of thyme, rosemary, wild fennel and the most peppery arugula (wild rocket) that we’ve ever tasted. As a chef and someone who loves the outdoors, I loved learning about the local landscape. You wouldn’t get this same experience if you did this hike on your own. 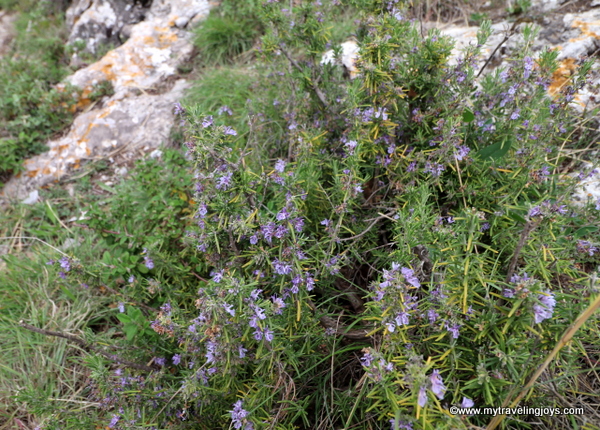 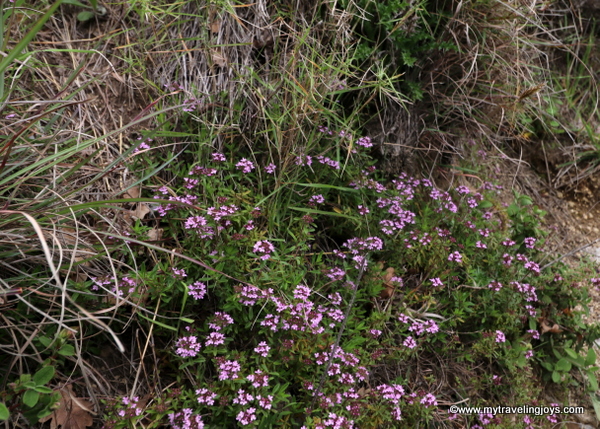 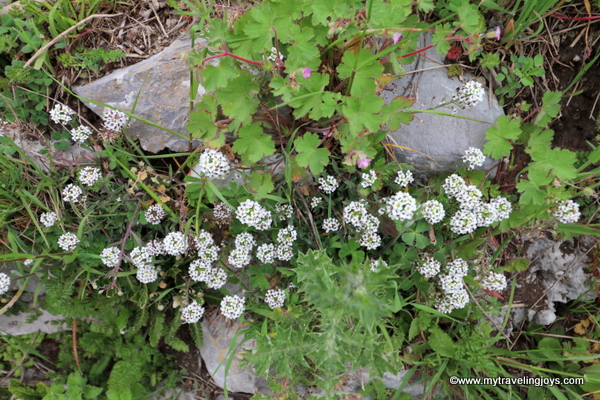 The Path of the Gods trail ends in the village of Nocelle where from there you must hike down approximately 1,500 steps to reach the center of Positano. A little ways before we reached Nocelle, we made a loop and started walking a trail slightly higher above the way we came so we could return to our starting point at Bomerano.
In Bomerano, we took refuge from the rain at the small café of Il Caffé degli Dei where we had an espresso and homemade lemon granita. What a sweet way to end our spectacular hike along the Path of the Gods! 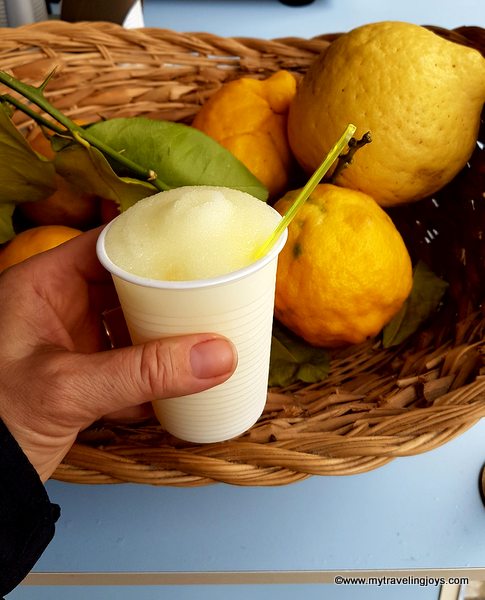 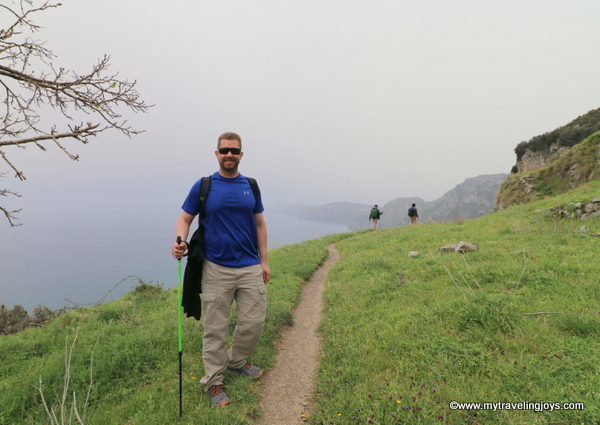 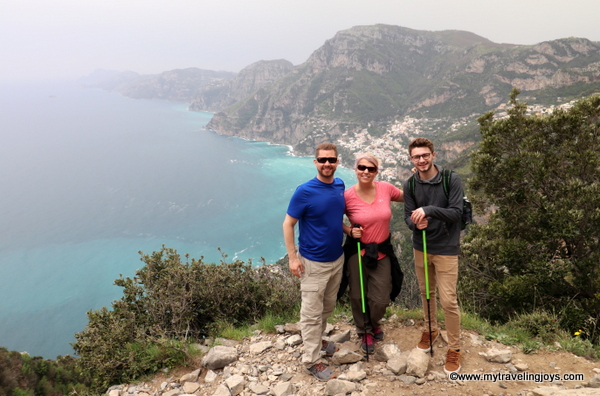 Hiking the Spectacular Path of the Gods along the Amalfi Coast