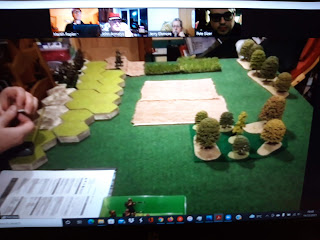 Tim put on another Fistful of Lead WW1 game, once again following the career of a youthful Lt Rommel and his adventures in France. This time the Germans were advancing in thick fog and had to move from Hill 325 rapidly past/through the French positions and exit half their men.

Pete, Simon and I were the Germans, while John and Jerry took the French.

The battlefield. Hill 325 is on the left, various fields and woods holding lurking Frenchmen scattered around the table. Time is really tight on this one as we only have seven turns to get across, which seriously limits how much time we can spend fighting. 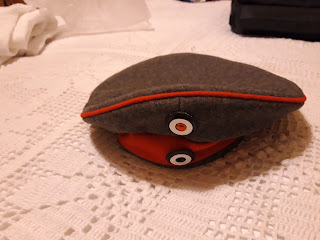 The main bit of prep I needed to do was decide which had to wear. My Feldmutze? 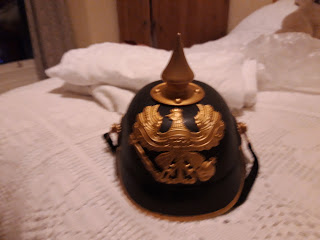 Or Picklehaube? In the end I plumped for the Picklehaube on the first day and the Mutze on the second. 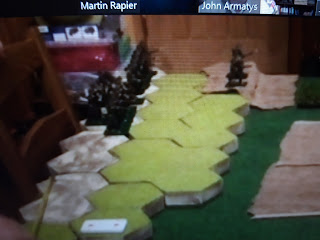 The Germans lined up behind the crest of the hill, and as we couldn't see anything, advanced line abreast. Simons sectio is furthest away, Rommel and his command group in the centre and my guys are closest. Six riflemen and my Sergeant. Each figure activates individually as it is a skirmish game, so no formation moves. 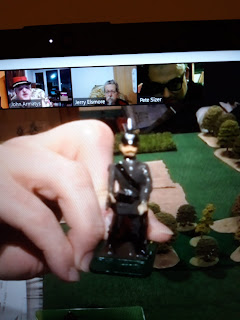 Here is Rommel himself, played by Pete. 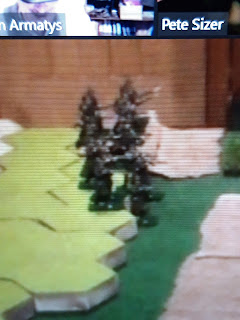 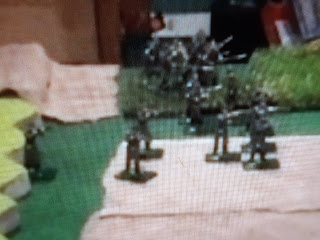 We pressed on into the fields. Tim rattled through the card draws fairly quickly and I forgot to activate figures a couple of times so my section became a bit ragged. This turned out to be a good thing! 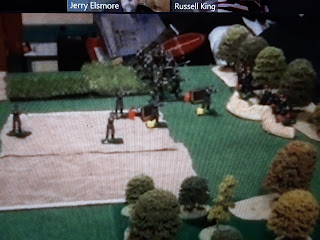 My leading figures moved towards the woodline, and were greeted with a hail of French rifle fire. A number of figures were shaken (yellow) or wounded (red). Ooops. 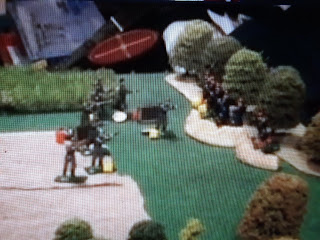 My straggling figures were able to half move up and return fire, which was surprisingly successful. The firefight was a such short range that we could hardly miss, but the fog and extensive cover obscured things. My job now was to keep the French busy while the other elements exited enough figures for a win. 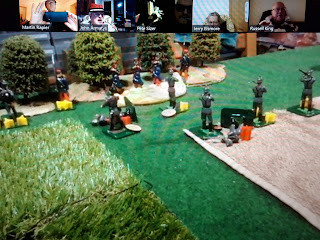 Tim sent these much clearer photos. My firing line is a bit ragged but hanging in there. Lt Rommel had a luck escape as all his companions were shot down. We've managed to suppress or wound a number of the French but now have a bit of a problem, we barely have enough unengaged figures left to get the required eight offtable. 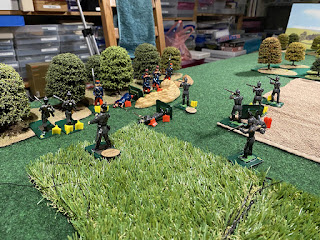 One of my chaps dashes over to the field on the left, just in case Rommel also succumbs to the French fire. Rommel has the same idea and also moves sideways. 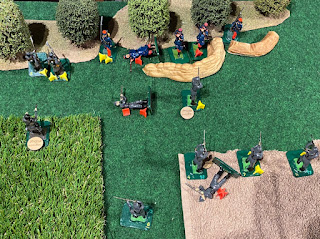 The French blazed away at them ineffectively. The cumulative effect of the suppression and wounds was just enough to keep their heads down. An overhead view of the carnage. 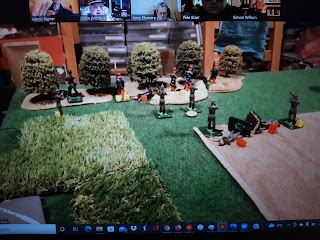 Fortunate favours the brave, and we manage to exit enough figures to win despite the French fire. 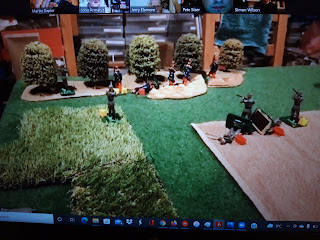 The remains of my section also start to infiltrate across and then forward, covered by fire as far as possible. We called it a day at that point as the Germans had achieved their victory conditions.
It was a hard fought battle, and the French suffered a bit from having one of their sections too far away at the other end of the table and unable to intervene. 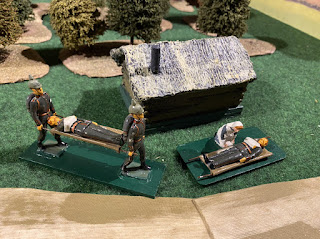 It wasn't exactly a cheap victory, and the German Field Hospital was kept busy.
So that young Lt Rommel lives to fight another day, where will the next exciting instalment take us?