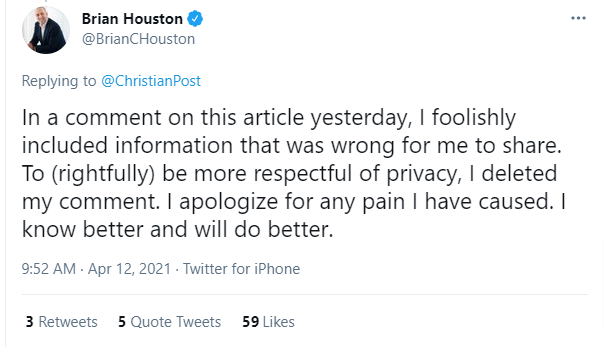 In an ironic turn of events, Hillsong’s Global Pastor Brian Houston has apologized for publicly outing the sexual assault of a former congregant after responding to an unfavorable article about his empire and the way they poorly handle sexual abuse victims.

Several weeks ago The Christian Post detailed student Anna Crenshaw’s experiences and aftermath of being sexually assaulted by Hillsong worship leader Jason Mays during her 4 years at Hillsong College and Hillsong Church in Australia.

Jason grabbed me, putting his hand between my legs and his head on my stomach and began kissing my stomach. I felt his arms and hands wrapped around my legs making contact with my inner thigh, butt and crotch…

Mays would later plead guilty to “assault with an act of indecency” in 2019. The sentenced carried two years of probation and mandatory counseling by the courts. Hillsong suspended Mays from ministry for one year but eventually welcomed him back, putting him in an administrative role in 2020 and having him sing on stage as a backup vocalist for church events.

His return to his old job, plus a dissatisfaction with the way Hillsong handled the abuse prompted Crenshaw to quit this past September.

Following the story, Brian Houston responded on Twitter, calling the story ‘factually wrong’ and publicly revealing that Crenshaw was also sexually abused as a child at her father’s congregation, explaining that this made the abuse at his church all the more “sadder.”

A number of things in the article are factually wrong, but abuse is NEVER OK. My understanding is Anna was originally abused in her father’s church in Pennsylvania. That makes it sadder. Whether abuse happens in Pennsylvania or Australia, it’s tragic.

Hearing that Houston outted her, Crenshaw told the Daily Mail, “This is an incredibly victimizing and heartbreaking response to receive from someone I held as my dear pastor for so many years…”

After widespread criticism for exposing the past sexual assault history of one of the victims who was also sexually molested at his own Church, Houston deleted the Tweet and issued an apology, explaining that “I foolishly included information that was wrong for me to share.”

Hillsong is currently experiencing a “come-to-Jesus-moment” as the stench of their rotting false theology corpse continues to catch up to them and be exposed more and more, resulting in repeated public scandals for the embattled organization.