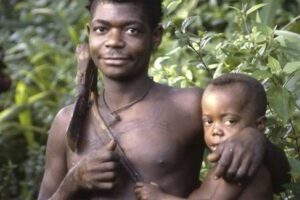 How Hunter-Gatherers Maintained Their Egalitarian Ways

From Psychology Today: “During the 20th century, anthropologists discovered and studied dozens of different hunter-gatherer societies, in various remote parts of the world, who had been nearly untouched by modern influences. Wherever they were found—in Africa, Asia, South America, or elsewhere; in deserts or in jungles—these societies had many characteristics in common. The people lived in small bands, of about 20 to 50 persons (including children) per band, who moved from camp to camp within a relatively circumscribed area to follow the available game and edible vegetation. The people had friends and relatives in neighboring bands and maintained peaceful relationships with neighboring bands. Warfare was unknown to most of these societies, and where it was known it was the result of interactions with warlike groups of people who were not hunter-gatherers. In each of these societies, the dominant cultural ethos was one that emphasized individual autonomy, non-directive childrearing methods, nonviolence, sharing, cooperation, and consensual decision-making. Their core value, which underlay all of the rest, was that of the equality of individuals.

We citizens of a modern democracy claim to believe in equality, but our sense of equality is not even close to that of hunter-gatherers. The hunter-gatherer version of equality meant that each person was equally entitled to food, regardless of his or her ability to find or capture it; so food was shared. It meant that nobody had more wealth than anyone else; so all material goods were shared. It meant that nobody had the right to tell others what to do; so each person made his or her own decisions. It meant that even parents didn’t have the right to order their children around; hence the non-directive childrearing methods that I have discussed in previous posts. It meant that group decisions had to be made by consensus; hence no boss, ‘big man,’ or chief.

If just one anthropologist had reported all this, we might assume that he or she was a starry-eyed romantic who was seeing things that weren’t really there, or was a liar. But many anthropologists, of all political stripes, regarding many different hunter-gatherer cultures, have told the same general story . . .

Theory 1: Hunter-gatherers practiced a system of ‘reverse dominance’ that prevented anyone from assuming power over others.

Theory 2: Hunter-gatherers maintained equality by nurturing the playful side of their human nature, and play promotes equality.

Theory 3: Hunter-gatherers maintained their ethos of equality through their childrearing practices, which engendered feelings of trust and acceptance in each new generation.

. . . In sum, my argument here is that the lessons we have to learn from hunter-gatherers are not about our genes but about our culture. Our species clearly has the genetic potential to be peaceful and egalitarian, on the one hand, or to be warlike and despotic, on the other, or anything in between. If the three theories I’ve described here are correct, and if we truly believe in the values of equality and peace and want them to reign once again as the norm for human beings, then we need to find ways to deflate the egos, rather than support the egos, of the despots, bullies, and braggarts among us; make our ways of life more playful; and raise our children in kindly, trusting ways.”

How Hunter-Gatherers Maintained Their Egalitarian Ways