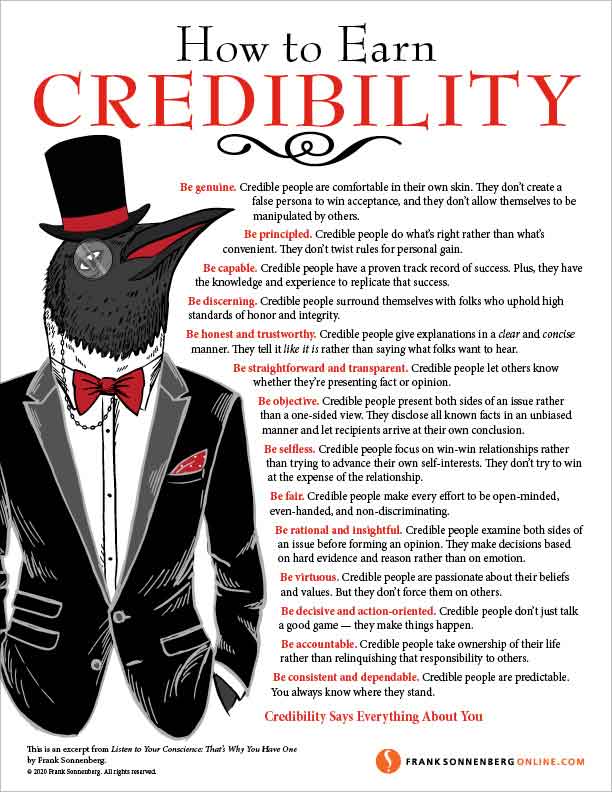 Here are 14 factors that contribute to your credibility:

Be genuine. Credible people are comfortable in their own skin. They don’t create a false persona to win acceptance, and they don’t allow themselves to be manipulated by others.

Be principled. Credible people do what’s right rather than what’s convenient. They don’t twist rules for personal gain.

Be capable. Credible people have a proven track record of success. Plus, they have the knowledge and experience to replicate that success. They don’t misrepresent their capabilities to get something they don’t deserve.

Be discerning. Credible people surround themselves with folks who uphold high standards of honor and integrity. They don’t let toxic people pollute their attitude, dampen their drive, or corrupt their morality.

Be honest and trustworthy. Credible people give explanations in a clear and concise manner. They tell it like it is rather than saying what folks want to hear. They don’t spin the truth or exaggerate benefits to make something sound better.

Be straightforward and transparent. Credible people let others know whether they’re presenting fact or opinion. They don’t abuse people’s trust by making a recommendation or offering advice without revealing vested interests.

Be objective. Credible people present both sides of an issue rather than a one-sided view. They disclose all known facts in an unbiased manner and let recipients arrive at their own conclusion. They don’t manipulate, suppress, or withhold important information to misrepresent the truth.

Be selfless. Credible people focus on win-win relationships rather than trying to advance their own self-interests. They don’t try to win at the expense of the relationship.

Be fair. Credible people make every effort to be open-minded, even-handed, and non-discriminating. They don’t show favoritism — rather, they treat superiors and subordinates with the same level of respect.

Be rational and insightful. Credible people examine both sides of an issue before forming an opinion. They make decisions based on hard evidence and reason rather than on emotion.

Be virtuous. Credible people are passionate about their beliefs and values. But they don’t force them on others. They recognize that one of the true tests of integrity is your refusal to compromise your honor at any price.

Be decisive and action-oriented. Credible people don’t just talk a good game — they make things happen. They jump on good opportunities, knowing full well that if you do nothing, nothing happens.

Be accountable. Credible people take ownership of their life rather than relinquishing that responsibility to others. They don’t point a finger or cast blame to evade accountability.

Be consistent and dependable. Credible people are predictable. You always know where they stand. They don’t blow with the wind, even when it’s convenient and tempting to do so.

Credibility is gauged by the level of confidence and trust that people have in you. You don’t secure that by sharpening your resume, learning how to play-act, or giving yourself a makeover. You gain people’s trust based on your moral character and your competence, and by consistently displaying admirable behavior.

Credibility Says Everything About You

This is an excerpt from Listen to Your Conscience: That’s Why You Have One by Frank Sonnenberg.

Please leave a comment and tell us what you think or share it with someone who can benefit from the information.

Additional Reading:
50 Ways to Lose Trust and Credibility
Why Do You Trust Some People and Mistrust Others?
Leadership Scorecard
Moral Character Matters
Live With Honor and Integrity

The post How to Earn Credibility appeared first on Frank Sonnenberg Online.