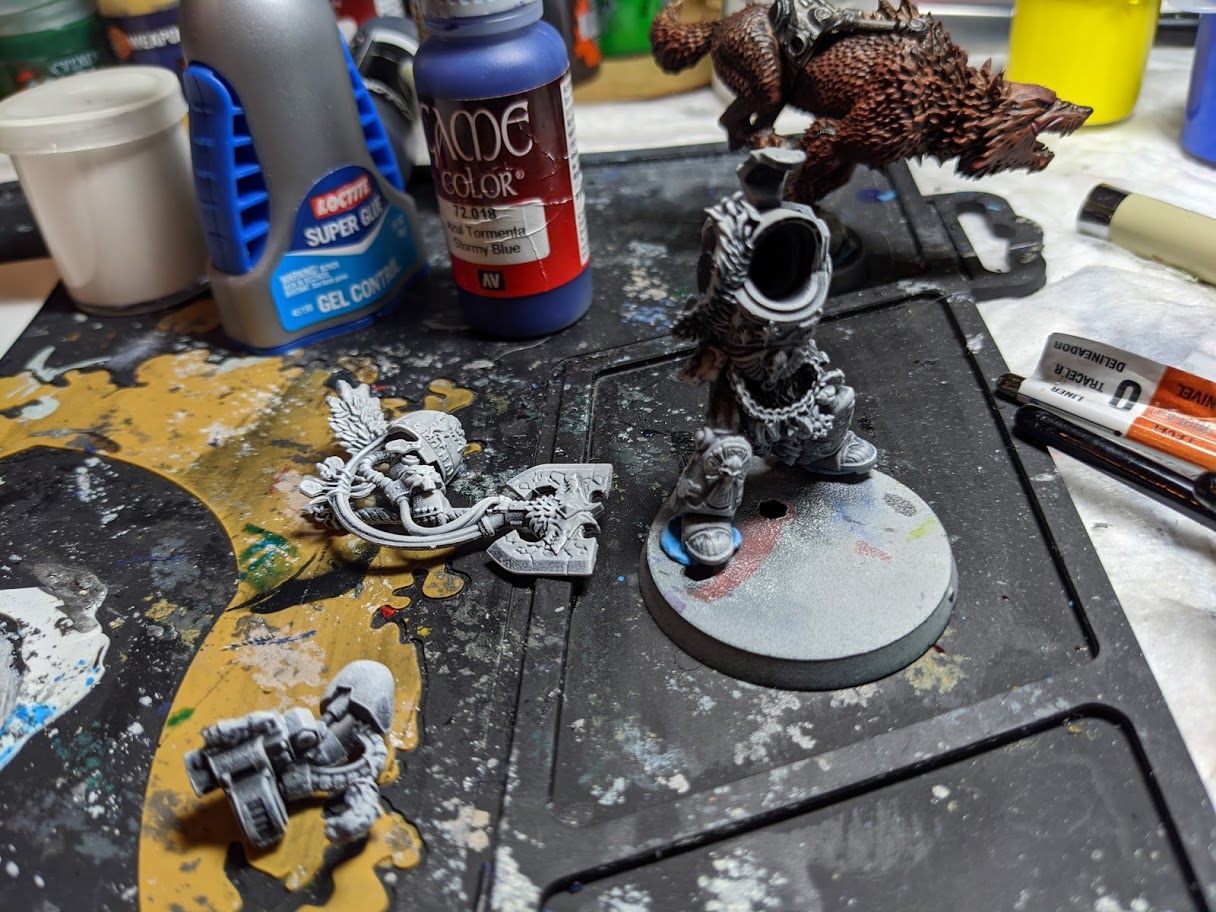 How to Paint Everything: Logan Grimnar on Stormrider as Santa Claus

In our How to Paint Everything series we look at how to paint well, everything. In today’s special holiday-themed edition, we’re looking at how to assemble and paint Space Wolves’ chapter master Logan Grimnar as Santa Claus.

Today I’m here to explain how I built and painted the most festive model within Games Workshop’s collection. No, I’m not talking about the Red Gobbo, Sloppity Bilepiper, or one of Bugman’s various incarnations. No no, I’m here to explain how to build and paint Logan Grimnar, Space Santa himself! More to the point, I’m here to paint him as Santa Claus. While I made some choices as to tie him into my larger Space Wolves army, my main focus was to have Santa, his Sleigh, and two Reinthunderwolves. This is why one of them has a shiny red nose.

I figure my experience in building Logan can help anyone who wants to do a more traditional take, as there are some odd ideas GW had in mind when making him. Nothing that isn’t easily (if carefully) fixed, but definitely some odd things to watch out for as you build

Note that if you’re interested in how to paint Space Wolves in their traditional colors and their chapter’s storied history and heraldry, you can find a guide to all of that in How to Paint Everything: Space Wolves.

A. Building and priming the parts of the model that are not Logan

So, I like to build and paint using subassemblies. Logan, given that he consists of a space marine Terminator, a sleigh, two wolves, a rock to hold up said sleigh, and his base, basically calls out for multiple sub-assemblies. For the parts of the model that are not the Terminator, I fully built the base, the rock, the two wolves, and the sleigh all as the instructions suggest. I didn’t assemble them all at this juncture obviously. But I kept them intact.

I then primed the second wolf with a coat of Grey Seer alongside all of Logan’s various grey-seered bits.

B. Building and priming Logan

Logan himself is a bit trickier than the instructions let on for sub-assembly building. I built them model in the following sub-assemblies:
1. Head
2. Body
3. Left Arm with Storm Bolter
4. Right Arm with Axe
5. Cape

If I had it to do over again, I would had built the cape just a little bit differently. See, Logan has a wolf helmet on top of the armor and cape. While most of it is with the cape, there’s a large section of it that’s built onto the top of the armor. I suggest you neatly and carefully cut this prong off, and assemble it with the rest of the cape. It won’t look bad at all, given that the connection points are covered by model.

I primed the armored bits (body and arms) in Chaos Black. I primed the head and capey bits in Grey Seer, and set it aside. I then used a smidge of Blu-Tack, and blasted the armor with grey seer from directly above to give a zenithal highlight. 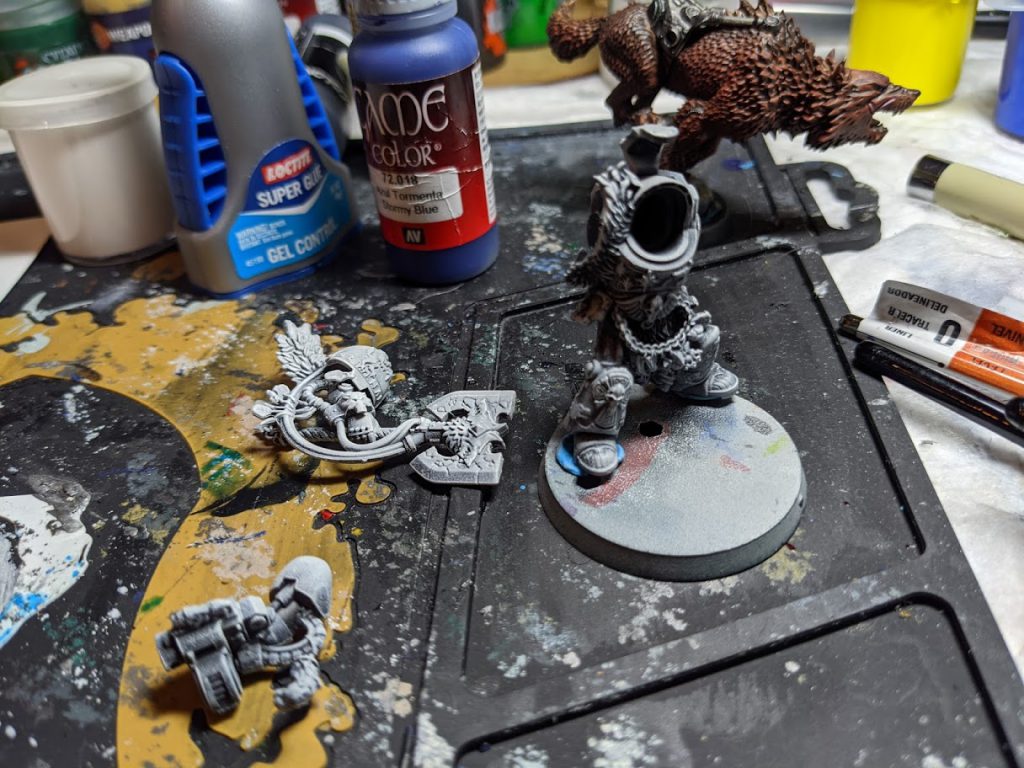 As I stated above, I wanted him to be Space Santa. The first thing I did was to paint his head. The head is what makes a model work, and if I screw this up, it’s time to find an alternative.

I painted Logan’s face with thinned-down Darkoath Flesh, and then higlighted up using a blend of Cadian Fleshtone and Kislev Flesh. I dabbed the eyes with nuln-oil thinned down with contrast, and used my trusty Micron Pin to paint his eyes. For his beard, I used very, very, very thinned down Guilliman Blue (a now-out-of-production glaze) to give his beard a tone. I then carefully highlighted the beard with Ulthuan Grey.

First, I consulted some pictures of Santa Claus to figure out my color scheme. It may seem stupid – everyone knows what Santa’s colors are, right? Well, what color are his boots? What color is his belt? So after looking at various images of Santa Claus, I had my color scheme:
A) Armor: Red. I used thinned-down Flesh Tearers Red for this. The use of contrast paint gave me some natural edge highlights, and I could concentrate additional layers closer to the center of various panels. This was helpful, as for the life of me I couldn’t figure out a good “jolly” edge highlight color
B) Fur: White I used Apothecary White for the fur, and a few layers of it. This gives the fur both a white “Santa” look while having a different tone/quality than his beard, and so they’re easily told apart. I then drybrushed it with White Scar.
C) Boots: Black: I used Black Templar here, as it is a very flexible color which likewise formed “natural” highlights that could be better contrasted by concentrations of Black Templar in the center panels of the boots.
D) Leather: Brown. I used thinned-down Snakebite leather here, This covered all of his various thongs, and the leather holding his fur into place. My advice would be to do this before you do the fur, so you can correct any oversplashes with grey seer.
E) Trim detals: Gold – I used Retributor Armour washed with Snakebite Leather (and then re-highlighted with Retributor) for the Gold details. This is how I did the rest of my Wolves, and they work well together.
F) Off-White Bone – Screaming Skull and then a wash of Seraphim Sepia, with a light drybrush of Pallid Witch Flesh
G) Metallics: Iron Warriors to Stormhost Silver, depending on where the light hit it.  Wash of Basilicanum Grey
H) Christmas Sweater: Wait, what?

So, Logan’s chest emblem is not an aquila, or even a wolf. Instead it’s a tiny little mural of a wolf howling in the night in front of a landscape. While I suspect a more traditional color scheme would be to paint this varying shades of gold or bronze, I decided to color it in. After all, it’s a Christmas Sweater!  I painted the chest emblem in Iron Hands Steel (a nice, shiny metal), and then painted the following: 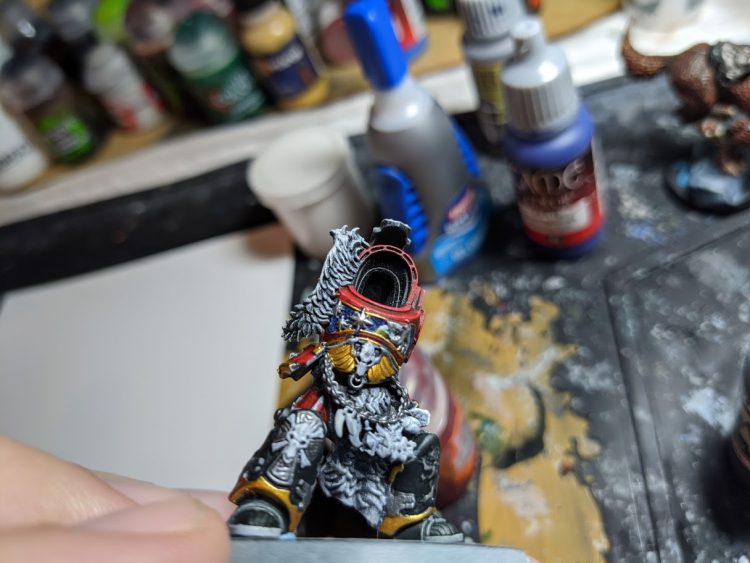 The End-Result was something that looked fierce, but also read to my eyes as “Santa Claus” 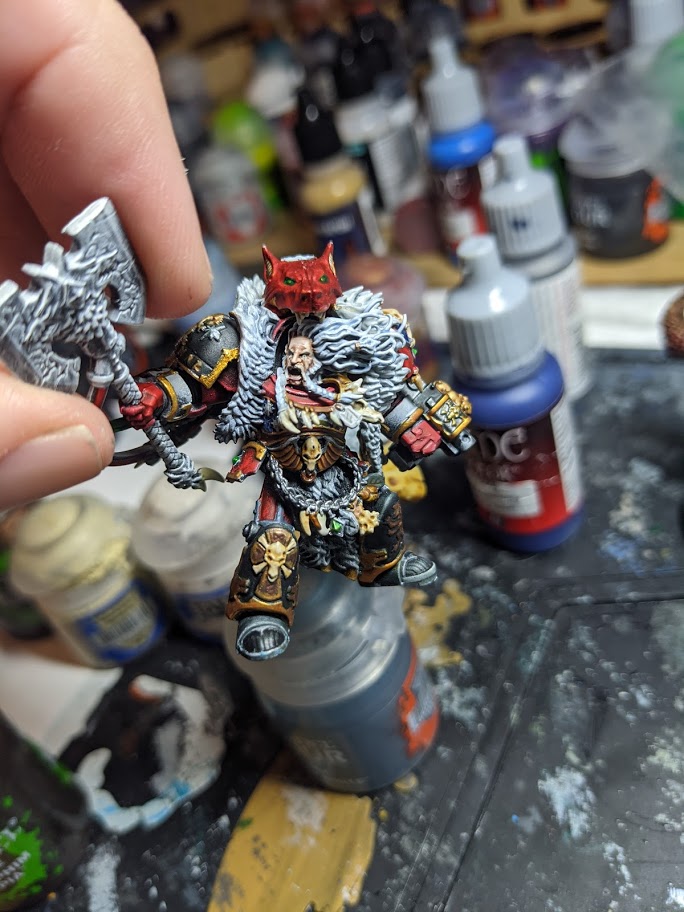 The for the various cords linking the axe to his armor, I decided to paint one set of cords white and Blood Angels Red.  This gave them something of a candy cane appearance, which again suited my desires for a festive Logan.  Another cord was painted in Ork Flesh.  Thus, the traditional Christmas colors of red, white, and green.  I painted the Axe Haft with Warplock Bronze, and drybrushed with Retributor Armor.  The axe head was painted with tesseract glow, then given a progressive drybrush of ulthuan grey and white scar.  And with that, Logan was finished.  Now, it was time to give him his ride.

B. Painting The Sleigh

Stormrider is dashing through the snow, a two-wolf open sleigh.  It is specifically going through a mound of snow – hard enough to be tall, but soft enough for a sleigh to hover through.  I painted his Space Wolves Grey.

Stormrider Proper received an initial drybrush of Scale 75 Black Metal, followed by a lighter drybrush of Iron Hands Steel.  This drew out the oodles of detail in the model, as well as serve as a base for how I wanted to do the sleigh.

I wanted the base color of the hull to be bronze, a la Santa’s wooden sleigh.  I used thinned-down Snakebite Leather, which makes a good deep bronze when applied over a metallic silver that’s not Stormhost Silver.  The wolf prow was painted Warplock Bronze, with a Retributor Armour drybrush because I had those paints open and on the pallet after doing the axe haft.  The trim was hit with the Retributor Armor/Snakebite Leather recipe, and the wings of the model with Blood Angels red to tie it in with Logan.  The “ropes” above the murals were painted green, so as to resemble boughs of holly/wreathes.   The interior circle in which Logan stands on was drybrushed with Celestra Grey, washed with Basillicanum Grey, and drybrushed again with Ulthuan Grey to give it a worn stone look.

The most prominent aspect of Stormrider, to me, was the two murals on the sides of the hull. One depicted a wolf fighting a daemon, and another depicted a wolf fighting either a Kraken or a Tyranid(1). I painted both murals the same, though the mural of the daemon was trickier since it was harder to determine where the flames ended and the daemon began. Here is the recipe for both:

Kraken Mural:
Sea – Talassar Blue
Mountain – Wyldwood
Krakenid – the body of the Kraken was hit with thinned down Shyish purple, and the head with Magos Purple. They blend together well.

Both were then drybrushed with Pallid Witch Flesh for a nice highlight. 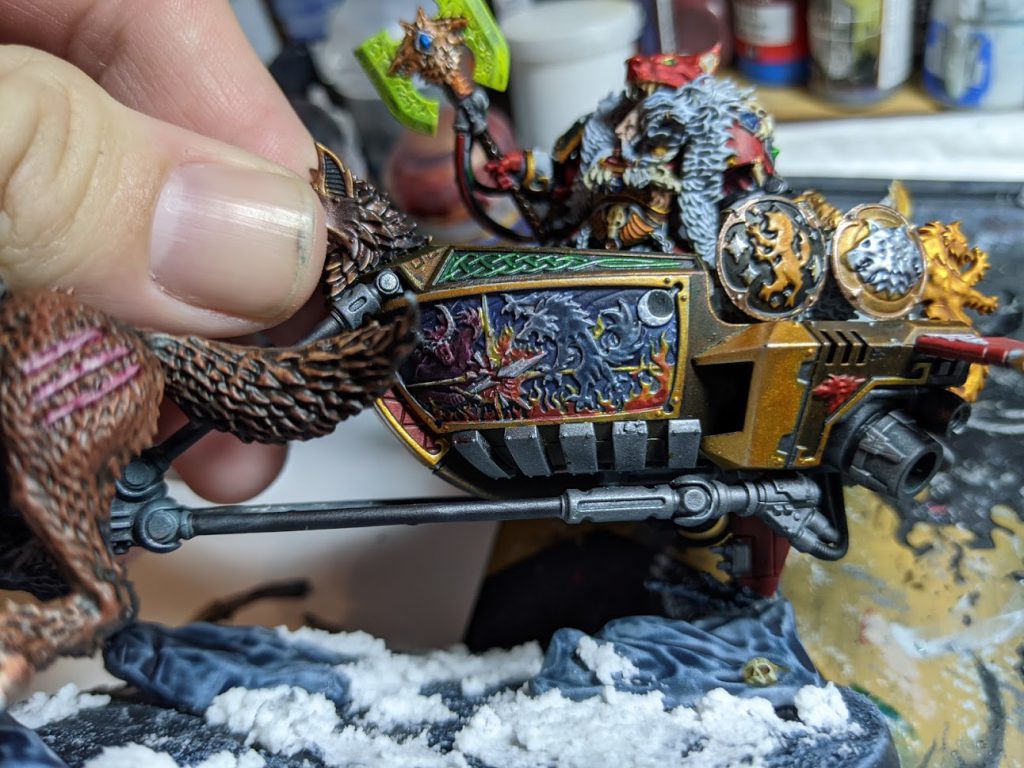 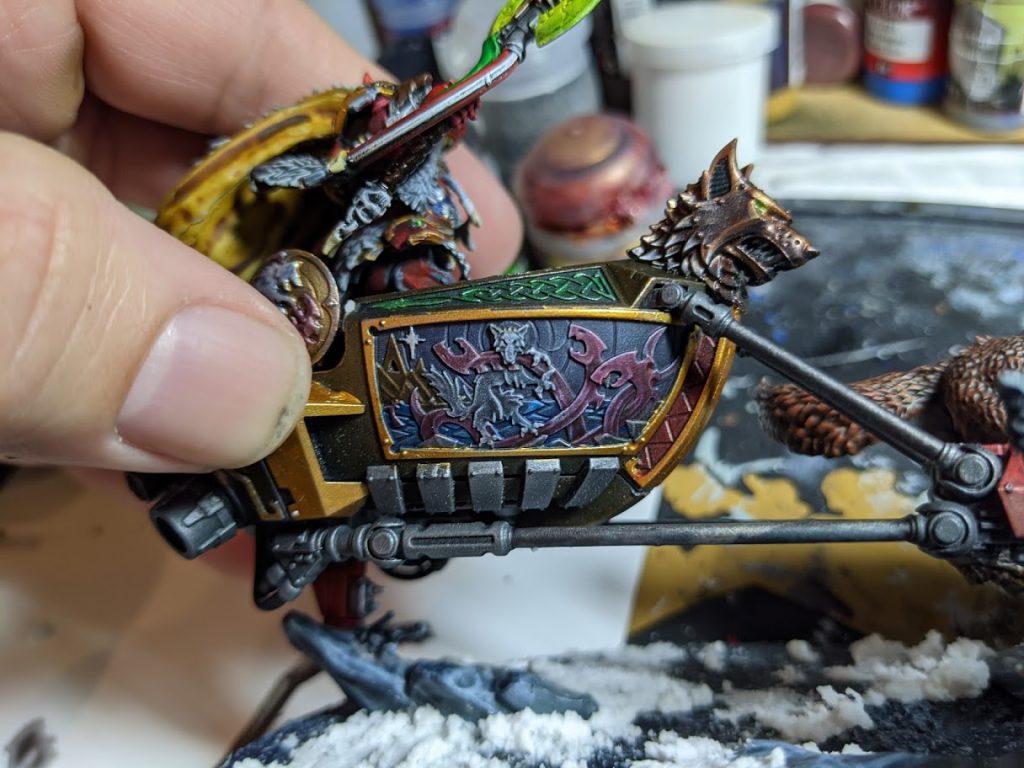 For the most part, the wolves aren’t too difficult. I painted one grey and one brown because I wanted them to look distinct from each other. The “left” wolf was painted with Wyldwood, then drybrushed with Doombull Brown and Rakarth Flesh. The “right” wolf was painted with Basillicanum Grey, and drybrushed with Fenrisian Grey and Pallid Witch Flesh. The eyes were painted Tallasar Blue (hinting as to their humanity), and the bone painted with Screaming Skull washed in Seraphim Sepia and highlighted with PWF. The scars were painted with PWF and a Volupulus Pink wash. As the “right” wolf was poking his head further ahead, he was declared Rudolph. I painted his nose like I would a light – Flesh Tearers Red, a “sphere” of Corax White -> Ulthuan Grey -> White Scar, then Blood Angels Red. 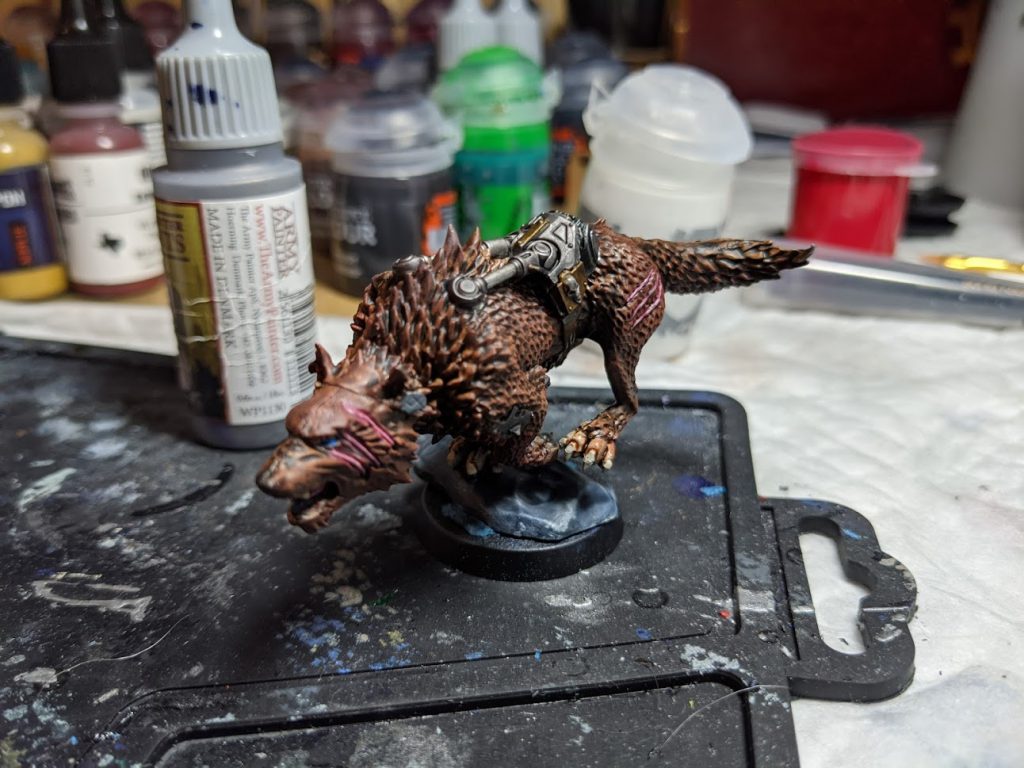 D.  Painting the Base

So, I did this in two different steps: assembling the wolves and the sleigh, and then attaching it to the base.  The attachment points from the reins of the sleigh to the wolves is a ball joint, and thus can be challenging to assemble so that both wolves and sleigh will fit level on the same base.  I used three 32mm bases to hold everything, and then superglued the wolves to the sleigh.  I then glued everything to the base, and had a space Santa! 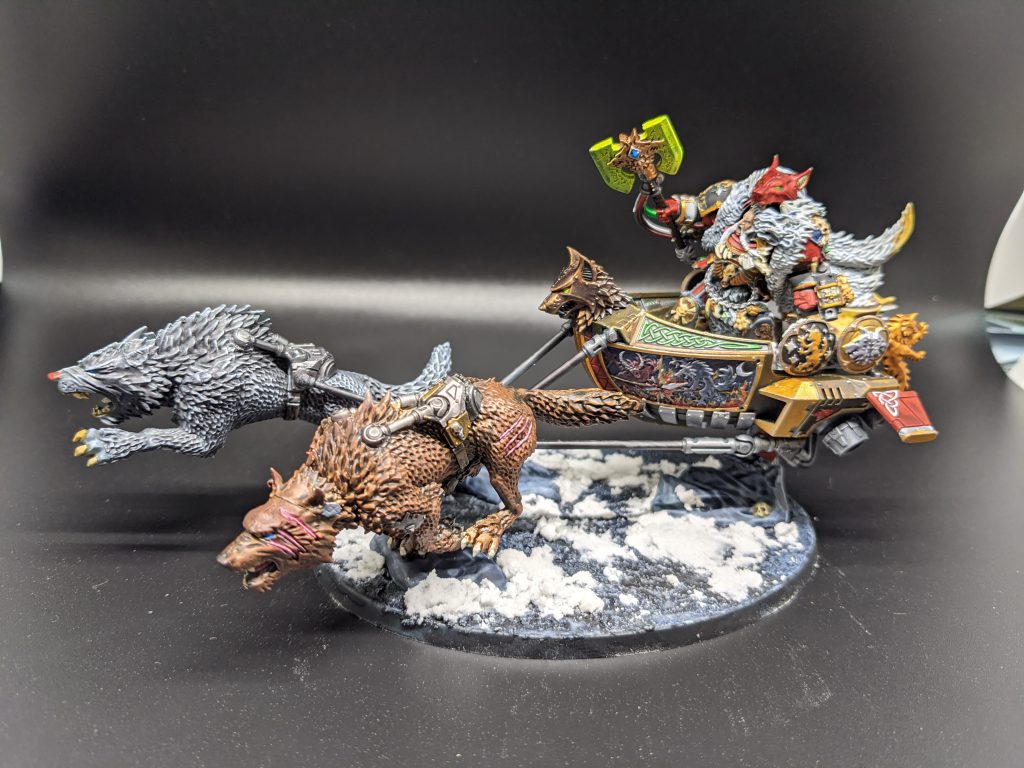 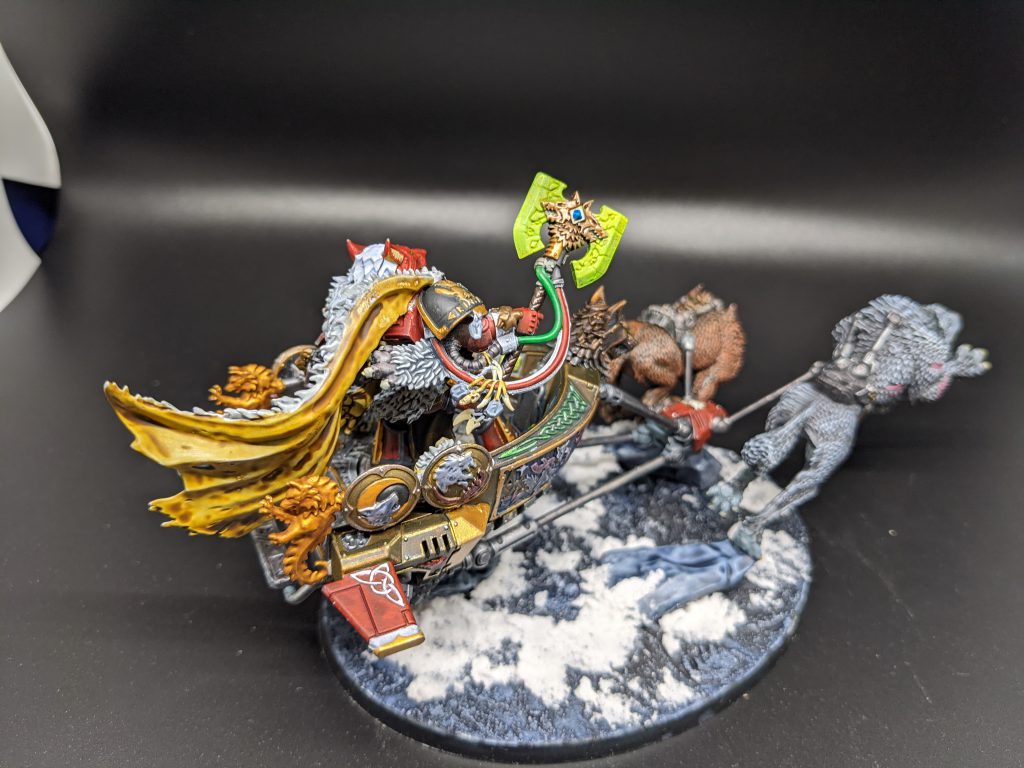 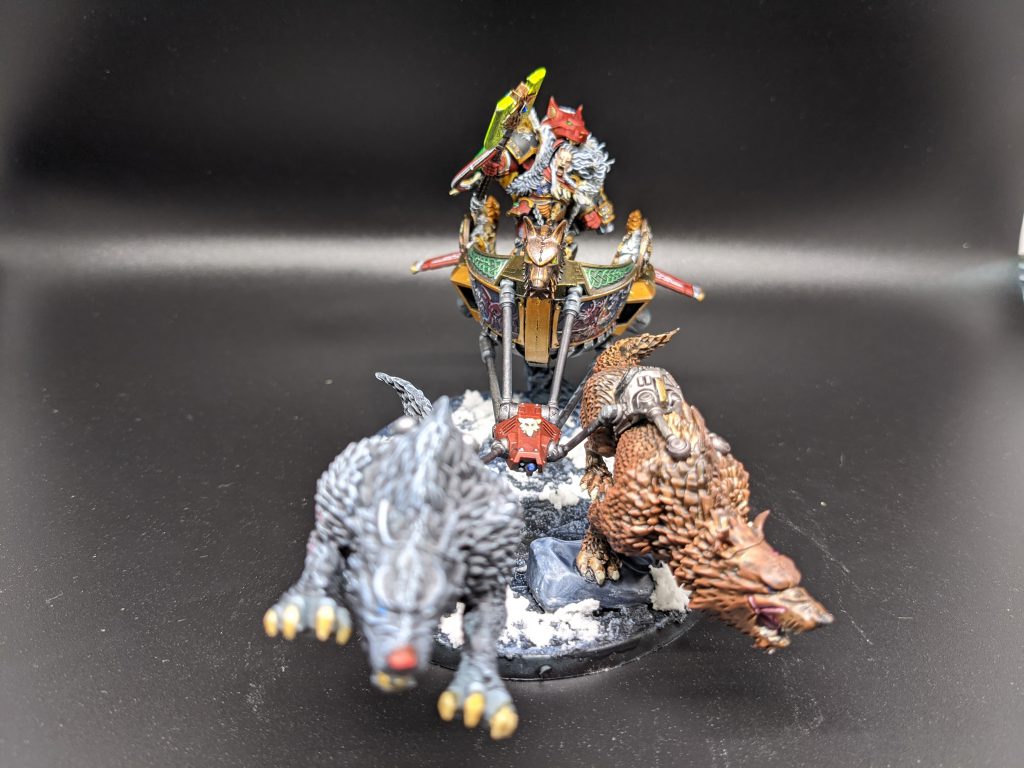 Logan Grimnar is now ready to be an HQ Choice in the Space Wolves army, and will happily determine who is naughty (the Heretic Astartes, Orks, the Inquisition, the Grey Knights) and who is nice (the Blood Angels and the Salamanders).

Have a happy holiday!

(1) Lexicanum, citing the 5th edition Space Wolves Codex, suggests the answer to this question is “yes”.

Have any questions or comments? Drop us a note below or email us at contact@goonhammer.com.

How to Paint Everything: Logan Grimnar on Stormrider as Santa Claus