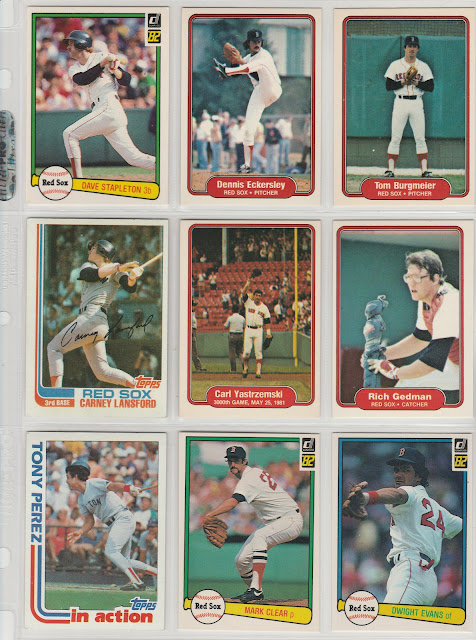 This is a series of posts on a 1980's Frankenset. Each page features a different team, with 9 of my personal favorite cards from that year's team. You might find players repeated, you'll definitely see brands repeated, but hopefully you'll agree that there are some interesting selections from the 1980s!

In 1981, which was more red? The Boston baseball team's faces, or their stockings? The season began without two of the biggest stars for the 70s teams, namely Carlton Fisk and Fred Lynn. The deadline for major league teams to tender contracts to their players was December 20th, 1980. The contracts for Fisk and Lynn were not mailed until the 22nd, effectively making them free agents. While the team was appealing the decision, Lynn was traded to the Angels (technically the teams made a separate trade the same day of Lynn's free agent signing, the trade is unofficially viewed as partial compensation for losing Lynn), but Fisk was another story altogether. The team tried to re-sign him, but the catcher found greener pastures in Chicago with the White Sox. Fisk would add the extra twist of the knife Opening Day 1981 by hitting the game winning homer against his old team in his first visit to Fenway. The rest of the 1981 season was not much better - even though the Red Sox finished 10 games above .500, they still managed to end up in 5th place in the AL East.

In 1982, The Red Sox surprised a lot of people by starting very hot, at one point winning 13 of 14 games during a stretch of April ball. After surging into first place, they remained atop the Eastern Division until July. There were a handful of feel-good stories as well, like the homecoming of sorts for Worcester, MA kid Mark Fidrych. "The Bird" signed a free agent deal in February with the Red Sox, but his big league career was over. Ted Williams returned to the field in the Red Sox first ever "Old-Timers" game, making a highlight in the outfield with a shoestring catch. Some might have quipped that he should have been playing alongside Ted in that game, but 42 year old Carl Yastrzemski was having an excellent season, reminding fans of the player they had cheered for two decades in the shadow of the Green Monster. As Yaz was putting the finishing touches on his career, Wade Boggs was just getting his going. While still trying to find a permanent position, Boggs forced his way into the lineup by hitting .349 over 106 games all over the Boston infield, settling at third. The good vibes weren't enough to win a pennant, however, and the Sox finished third behind the Orioles and the Division winning Brewers. 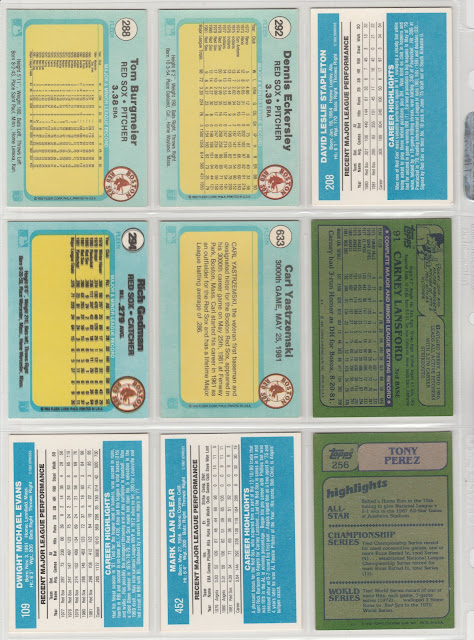