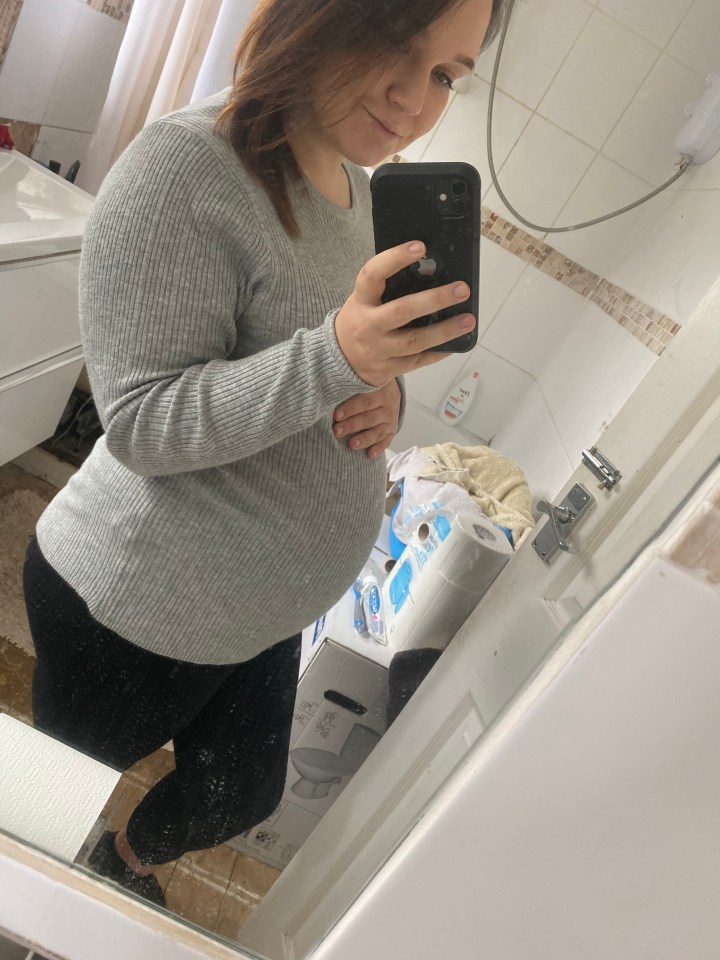 MUM Amber Casey was 20 weeks pregnant when she was told her second child’s heart wasn’t growing properly and was offered a termination.

Determined to continue with the pregnancy, Amber gave birth to little baby Orton and five days later – the condition vanished with doctors hailing it a miracle.

Orton is now a healthy, happy little baby but Amber has now relived the trauma of the ordeal.

After a 20-minute scan in hospital in 2019, Amber, now 23, was choking back the tears as she clutched her partner Scot’s hand.

The mum-to-be, from Hemel Hempstead, Hertfordshire, said she knew something was wrong, but nothing prepared her for what she was told.

The left side of her baby’s heart was smaller than the right, which could mean he would need up to three open heart surgeries when he was born.

Amber was told some children don’t live past five years old – and she was also offered a termination.

Amber recalled: “Scott and I were so excited when we found out I was expecting again and I couldn’t wait to give our little boy Sebastian, now three-years-old, a brother – who we’d named Orton.

“But when I went for my 20-week scan in September, the sonographer said she couldn’t get a good view so I had to dance around and drink a fizzy drink to encourage movement.

“She then tried again, but didn’t say anything for ages. I felt sick when she said she couldn’t see the left side of Orton’s heart. Then she said we needed to be sent to London for an appointment at the Fetal Medicine Hospital.”

Amber broke down and cried. Their appointment wasn’t for another three days, which she says was “the longest wait of my life”.

Going into the examination room, Amber laid down while a fetal doctor spent 20 minutes doing an ultrasound scan on her stomach.

Amber sensed something was wrong when the doctor asked the couple to take a seat afterwards.

Amber recalled: “My poor partner’s hands were aching from how tight I was holding them. The doctor reached for a pen and paper, and that’s when I knew.

“I couldn’t catch my breath, I could feel my eyes stinging from holding back the tears of the words I already knew she was going to say.

“She showed us comparison pictures of our son’s heart next to a normal heart and said our son’s left side was the same length but not the same width as the right.

“As the pregnancy was only 20 weeks, she couldn’t tell what the outcome would be.

“She said the left side of Orton’s heart might not grow which would mean at least three open heart surgeries to make the right side take on the work of what the left should have been doing.

“She told us some children don’t make it past five-years-old and many are in hospital for most of their childhoods due to surgery and recovery.”

The couple was also asked if they wanted to test whether Orton had any chromosomal abnormalities – as babies with heart defects have a higher risk.

And they were also offered a termination – in the UK pregnancies can be terminated before 24-weeks if the unborn child has heart issues.

Amber and Scott were devastated that their son’s heart wasn’t growing properly and was at risk of congenital heart disease – which affects one in 100 babies.

What is congenital heart disease?

Congenital heart disease (CHD) is a term that refers to defects in birth that have an impact on how the heart works.

Congenital means that it is a condition that is present from birth.

The NHS says there is no obvious cause but states that there are some factors that put babies at an increased risk:

Amber said: “I cried the entire weekend, asking myself why me, why our baby and questioning what I’d done wrong to deserve it. I wanted the pain to end.

“A fetal medicine nurse called and she was really supportive. She understood that as a mother, I didn’t know how to feel and I didn’t know whether to terminate.

“She told us to have a look at charities and Facebook groups; I was amazed to get support from couples all over the world.

“They told us their stories and about life with a child with congenital heart disease after birth.

“I’d walked into the CHD world scared and frightened. I’d lost hope but these people gave me hope that I could fight this for my son, alongside him and with support from the NHS.”

At 23 weeks pregnant, Amber declined an abortion and booked a scan for in two weeks time.

The 25-week scan in October revealed Orton’s heart had grown ‘slightly’ and seemed to be working.

However, he was diagnosed with coarctation of the aorta where the left main artery was too narrow to let enough blood flow to his other organs.

The couple were told this can send a baby into heart failure – as well as other organ failures – and the only way it can be fixed is by surgery.

Amber said: “The baby was still on the 10th line on the growth chart after another five weeks but he was steady. There was no change at the 30-week scan either.

“Again they asked if we wanted to test for chromosomal abnormalities as Orton’s bowel was bright but I declined as I didn’t want to risk putting him in any danger.

“We were booked in to view Brompton Hospital in London so we could get used to the surroundings before Orton arrived. It should have been an exciting time but I was anxious.

“We didn’t have much ready at home because I was scared I wasn’t going to be bringing him home. As sad as it sounds, I just didn’t want to jinx it.”

On 3 January 2020 at 36-weeks and three days Amber was experiencing reduced movements and doctors agreed it was safe to induce her at 37 weeks.

Amber was induced at 37 week and was shocked to find Orton’s heart had grown[/caption] Amber went into hospital to be induced and two days later, on 10 January 2020, she gave birth to a 6lb 8oz Orton[/caption]

But during the scan, Amber’s sonographer said blood flow through Orton’s artery was normal.

Amber and Scott were shocked to hear baby Orton’s heart had started to grow on the left side.

She said: “As the doctor scanned me just after 36 weeks, she said she didn’t feel that the baby had the defect anymore.

“I thought I was hearing things when she calmly explained that the blood flow through Orton’s artery was normal and she didn’t see any narrowing.”

Amber went into hospital to be induced and two days later, on 10 January 2020, she gave birth to a 6lb 8oz Orton who was “breathing perfectly”.

She said: “I couldn’t believe it! He was breathing fine and seemed to stay a perfect skin colour. I felt every emotion as he was placed on my chest before he went to the NICU.

“But it was short-lived as he started to struggle a little with his breathing and doctors gave him antibiotics for a suspected infection.

“Our little boy got better and his results came back that there was no infection. A doctor in the NICU said everything seemed to be working fine. We were ecstatic.”

The following day, the doctor told the couple while there was no narrowing in Orton’s arteries, his heart was still small on the left side.

He also explained that the connection hadn’t fully closed – this connection is open while in the womb to let blood reach the bottom organs.

Orton’s heart had expanded with no explanation[/caption]

Four days after birth, Orton was taken back to Amber in a transitional care ward and the new mum and baby were looked after by neonatal nurses.

On day five, Orton was rescanned and the left side of his heart had “randomly expanded” to the size of the right and worked “perfectly”. On day seven, the family went home.

Amber said: “I couldn’t believe it when doctors said the left side of his heart had randomly expanded.

“They said it was miraculously the same size as the right side and worked perfectly!

“He was struggling to breastfeed due to having a serious tongue tie, but two days after the hospital cut it, we were able to go home. I was so excited to finally enjoy being a new family-of-four.”

Four weeks later, the family had an appointment at Brompton Hospital and scans reconfirmed that Orton’s heart was working properly – and there was no defect at all.

In October 2020, Great Ormond Street Hospital confirmed Orton didn’t have a skin issue – after his stomach, arms and legs looked mottled after birth – and he was finally ‘signed off’

In November, he was rescanned and the results showed the hole has closed and his heart continues to grow and work “perfectly”; doctors called it a “miracle”.

Amber added: “The skin issue turned out to be nothing sinister and most likely just bad circulation but it will improve over time as his heart is working fine.

“When Orton was rescanned last November, we were signed off and it felt a complete relief.

“Our hospital and neonatal cardiac doctor couldn’t explain to us why this happened and no one had ever seen this before – it was a real miracle.

I met ex on Naked Attraction - our steamy romps saw me hospitalised, I've no regrets

I'm dating my step-brother, I've fancied him for years so what's the problem?

“It has been hard with Orton’s heart and going into a pandemic two months after he was born but I will always be grateful to the NHS for their support.

“Congenital heart disease and Orton’s pregnancy has opened my eyes up to the world.

“I started to document my journey with Orton back in 2019 and life as a mum-of-two; now I help families who are going through similar on my Instagram Amber and Boys.