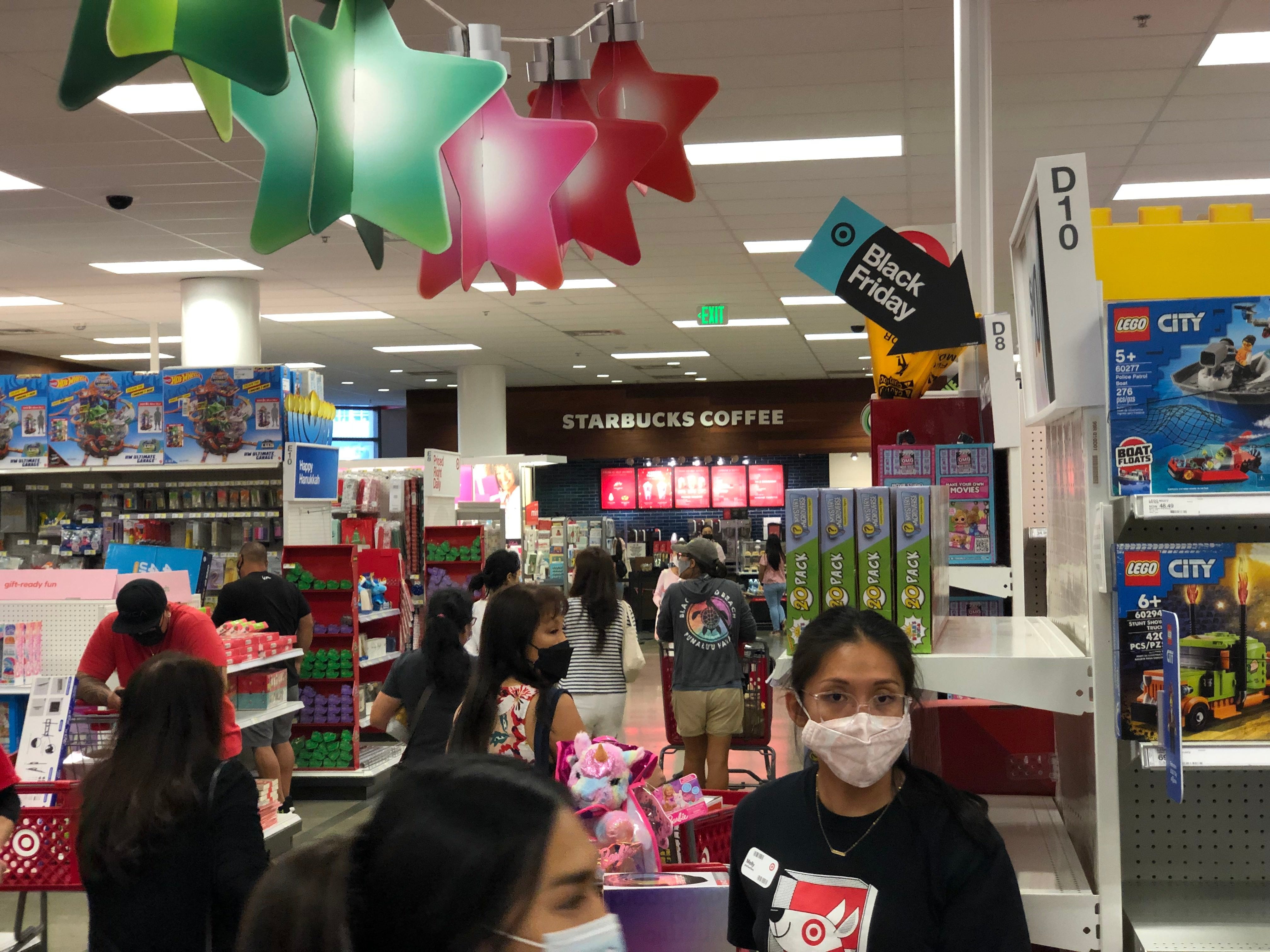 Over Thanksgiving break my freshman year, I convinced a group of new college friends to wake up at 3:30 a.m., pile into a minivan, and head to the King of Prussia mall. They thought I was crazy, but I know they're grateful for the memory.

That may have been the last time I did the Black Friday thing. Over time, lacking access to a car, traveling over the holidays, and shifting spending priorities made this frantic shopping day less appealing. But this year I moved to Honolulu, Hawaii, and I thought it might be nice to look for deals in my new city.

I set off for Target a little after 6:30 a.m. on my bike. (I still don't have a car.)
Target opened at 7 a.m., only one hour earlier than normal. They also had closed the main pedestrian entrance, and signs informed us we had to enter through the parking garage.
Inside the mall parking lot, the situation was chill enough that one security guard just seemed to be scrolling on his phone.
I got to the second floor entrance a couple minutes after 7 a.m. Groups of people were chatting as they rolled in, but there was little of the chaotic energy that I remembered as a kid trying to get the special edition Christmas ornaments at JCPenney.
The first thing I noticed was a 'Mele Kalikimaka' greeting when I walked in. I'll admit I'm a huge sucker for locally-targeted advertising from national chains.
Immediately, I got distracted by something I previously had no intention of buying — just as Target planned.
I headed to the kitchen aisle. No Black Friday deals.
I chatted with some store employees in a quiet part of the store. They speculated that shopper volume was low because Ala Moana mall itself wasn't opening until 8 a.m. But they also suggested I'd find more people in the toys and electronics section.
They were right … sort of. (One shopper seemed to be capturing his experience on his GoPro.)
I was shocked to see this Play-Doh shelf cleared out just 11 minutes after the store opened.
The game aisle was a bit more crowded than other aisles.
Seeing that board games were 50% off, I texted my coworker, a board game aficionado, to see what he recommended. None of his three recommendations were marked off, but the ones that were seemed to be selling fast.
One thing I noticed right away: The fullest carts were the Target employees' who were collecting people's in-store pick-up orders.
I wandered over to the electronics section, where parts of it were cordoned off. There were massive TVs around the store, but when I spoke to a clerk, she told me few customers actually expressed interest in purchasing one.
Meanwhile, Target had set up a little electronics market in the produce section.
The second floor overall seemed empty, to the point where I saw store employees just catching up with each other.
The areas where I wanted to find Black Friday deals the most were the food aisles. Because they're almost all imported, groceries are extremely expensive in Hawaii. No sales — nor customers really — were to be found.
Around 7:45 a.m., I headed to Walmart two blocks away.
I walked in and it was immediately clear that this was not Walmart 10 years ago.
They had no signs advertising special Black Friday hours, but when I had looked it up online, it said the store opened at 5 a.m. this morning.
When I asked about some of the deals, one store employee told me I should check the store flyer. (In Hawaii, everyone reads store ads to get deals.) But when I asked for a store flyer, another store employee told me they were out.
Walmart was as quiet as I've ever seen it during the past year. It's normally far busier on the Saturdays when I go grocery shopping.
Unlike Target, I didn't really see anything flagging any deals for Black Friday, so I nixed this as a place to grab stuff off my list. One clerk I talked to seemed to suggest that the deals were already over and/or sold out.
The one thing still happening: sales on laptops and giant TVs.
One thing that did seem to be unusual was the amount of security present. Maybe there's normally this many walking around but I don't notice because of the number of shoppers present. Between folks at the door and those walking around, I saw at least half a dozen.
No food sales either!
Over the intercom, Target had played a message reminding people to wear masks in the store. Hearing that announcement reminded me that stores like Walmart and Target don't serve as the social hubs that they did just a decade ago. Amazon Prime and the pandemic have fundamentally changed how we shop.
I don't miss reading headlines of people trampling others to death over a TV, but I'm a bit nostalgic for the fact that an activity that used to bring people together (at least physically) now seems to have become a far more solo venture.
As Walmart and Target continue to compete with Amazon — six months ago, the online retailer purchased land for a distribution center in Honolulu — it'll be interesting to see if Black Friday continues to seem more like any other day during the holiday season.
Read the original article on Business Insider
Source: proxy.google.com