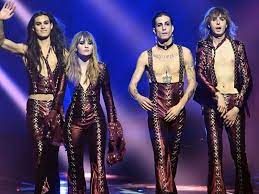 IF I CAN DREAM - MOMENT OF SUBSTANCE SNEAKS INTO EUROVISION

A disclaimer. I hate Eurovision. Apologies to my daughters but the songs all blur into a big quagmire of blancmange. Note my use of French! Tonight is no different. Lots of Capaldi and Sheeran wannabes though I will admit that the UK had a half decent song.
And then... last year's winners, Maneskin, spoke of Elvis and did the intro to a song that they seem to have done for an Elvis movie.
Suddenly, we were back in the real world. Oh we were dreaming. We were hoping. Maybe even against all the odds but hoping all the same.
Of course I love Elvis. Elvis was the first musician that I ever wrote about. An essay in Year 9 English had me attempting to unpack Jailhouse Rock!
However, my grown up self has struggled to find too many Elvis songs of social transformation. In The Ghetto is my favourite. Next to that is If I Can Dream. we are back to Maneskin.
Consider the war in Ukraine, the shadow of which is cast across Eastern Europe to Turin tonight.
Hear Elvis: -
We're lost in a cloud
With too much rain
We're trapped in a world
That's troubled with pain
But as long as a man
Has the strength to dream
He can redeem his soul and fly
Written by Walter Earl Brown and Influenced by Martin Luther King's I Have A Dream Speech from 1963 this is Elvis's Imagine. As Lennon. imagined a better world, so Elvis sings:
There must be peace and understanding sometime
Strong winds of promise that will blow away the doubt and fear
If I can dream of a warmer sun
Where hope keeps shining on everyone
Tell me why, oh why, oh why won't that sun appear
It's a prayer. Prayers are crammed with dreams and hopes for a better tomorrow. On a night that for me had too much crass and kitsch the King Of Rock N Roll sneaked in to give something more substantial.
For Ukraine tonight. If we can all dream.
Source: stocki.typepad.com

IF I CAN DREAM - MOMENT OF SUBSTANCE SNEAKS INTO EUROVISION