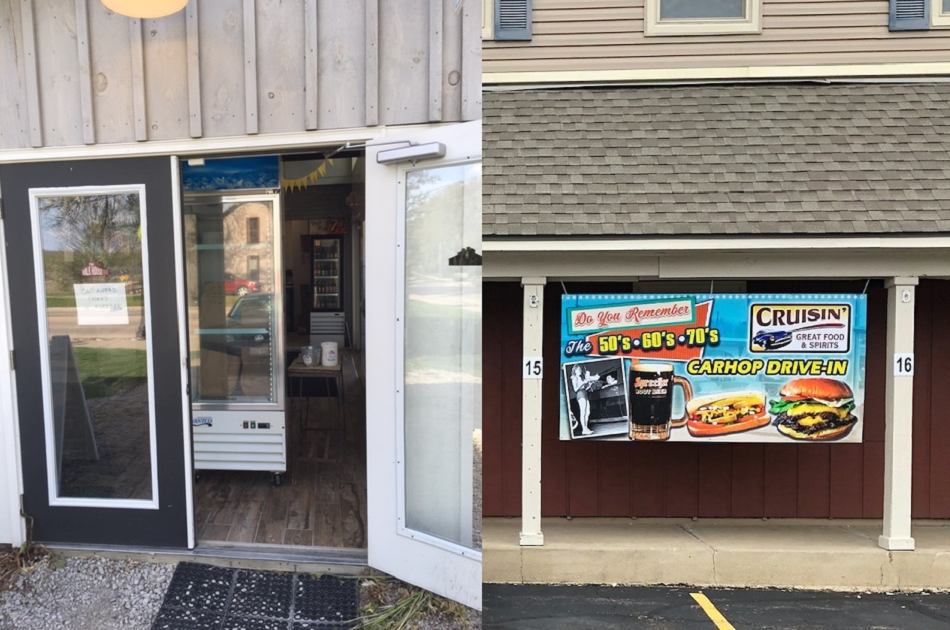 Even when the temperature rises ever so slightly in March and April, Clint Carey can still count on more business to his ice cream shop.

Located about 50 miles west of Chicago, The Milk House in Pingree Grove, IL sees a regular uptick in traffic every spring and into summer. On weekends, families come in to pick out a cone or one of the shop's special sundaes.

In addition to delivery and takeout, an ice cream shop and a bar and grill in Kane County, IL both implemented out-of-the-box solutions to serve their customers during the current pandemic.

Cruisin' has been a staple in Kane County since 2003, offering a wide assortment of delicious burgers, shareable appetizers and cold beer on tap. It also is one of the rare restaurants in the Chicago area that serves Sprecher's Root Beer on tap.

Of course, this year is trending in a different direction for both businesses.

With the COVID-19 pandemic forcing restaurants, bars and other establishments to close their dining rooms, many independent businesses are seeing steep dips in sales and traffic. From the onset, Business Insider projected that 110,000 restaurants could close permanently due to the pandemic. The harsh reality is that many have to decide whether they can stay afloat with a delivery/takeout model or close up shop.

Illinois closed dine-in areas on March 16 and ordered a full shelter-in-place restriction on March 20. However, both Carey and Lange acted swiftly.

The Milk House immediately transitioned to in-house delivery and curbside pickup only. Customers must call ahead of time to order and can no longer walk in to get ice cream.

"This was something we just decided within a day," Carey said. "We set up some parameters and contacted a local sign company to start having signs made. It was a fast decision."

The shop also does a contactless, grab-and-go service where ice cream is then placed into a freezer by one of the doors to limit exposure. That even includes cones, which are placed into a 16-ounce cup and placed in a cup holder.

"What we did was lock one of our front doors and move a glass door freezer right inside the other door," Carey explained. "So people open the door and the freezer is right there. Their items are packaged with their name on it, [and] they literally grab them and go with no interaction. We keep our door handles disinfected and our staff has little exposure."

Cruisin' also went to delivery and curbside pickup in addition to its traditional takeout in Mid-March. However, Lange didn't stop there.

He decided to add a special carhop service about a week later. The carhop option, which is available on only Saturdays and Sundays, was inspired by a trip Lange and his wife made to a local hotdog place about a week before

"I saw that you're in your car more than six feet away from people," Lange said. "So I knew we could do that [at Crusin']. I numbered my parking spots with stakes and came up with a very small menu. It's not hard because we have all the equipment at the restaurant."

The carhop service features a special menu, limited to smash burgers, hotdogs, select sides and drinks, including the famous Sprecher's Root Beer poured from the tap. The carhop model not only has helped Lange's establishment, but it also had helped locals socialize while maintaining proper distance.

"People are going stir crazy," Lange said. "We had a Sunday, for example, where three cars came in at the same time. They all sat in their car, ordered food and rolled down windows to talk to each other.

Delivery at Crusin' is being handled in-house by the phone and wait staff. Lange immediately communicated the addition on the restaurant's Facebook page and with signage outside the building. He also purchased heat bags and more carryout boxes to handle the larger demand and reorganized the plating area of the kitchen by replacing dishes with different size carryout boxes.

While the new services have been effective, both establishments faced some challenges and difficult decisions early on. When Carey initially kicked things off, he originally offered the full menu. However, after some time to evaluate, he realized that certain items didn't maintain their full quality when made for delivery and curbside pickup.

Carey also had a tough time getting some customers to understand that the walk-in service was suspended. Despite signage and communication on social media, patrons still were trying to get inside the building.

"We locked every door but one, and that has a big freezer in front of it," he said. "So when you open the door, this freezer is right in front of you. Still, people were on their tiptoes saying, 'Hey. Give me an order' or 'All I want is a cone.'

"Some people just didn't understand what was happening. I think everyone is trying to navigate through this together."

As for Lange, he had to have a heart-to-heart with his staff. When dine-in restrictions were put in place, he talked with his cook staff about potentially adjusting wages down the road. He also made the decision to pull all tips, so they can be divided among his staff.

Fortunately, he hasn't had to lay off or furlough both the cook and wait staff. One server, who had another job, decided to leave voluntarily.

"I want to keep my employees working," Lange said. "We've been here for 17 years, and they've been loyal. I want to keep paying them."

Both businesses also had to tweak operations. For Carey and The Milk House, they explored third-party delivery but realized that the shop's location and didn't make that option very feasible.

Fortunately, business has been steady and seen solid support locally. The Milk House has had steady business from delivery and curbside and seen pint sales grow four times compared to 2019, according to Carey.

Lange said Cruisin' has seen consistent business as well. The restaurant also is trying to come up with creative ways to engage with the community. It occasionally hosted car shows before the pandemic and recently had participants showcase cars in a safe way.

"We did send an invite out for lunch to a group of our car show participants," Lange said. "They had instructions to park in every other space [and to] stay in their vehicle [while] food was brought out curbside."

Both establishments could be keeping their new services in place for a while. On May 5, Illinois released Restore Illinois, a gradual, five-phase plan to reopen the state in five regions. Each phase is designed to ease certain restrictions and allow different businesses to reopen.

The entire state is currently in Phase 2, which restricts restaurants only to delivery and takeout. Under the existing plan, restaurants and bars can't reopen dining rooms until Phase 4, as long as they restrict gatherings to 50 or fewer people. Still, reaching that phase requires certain benchmarks, including low case positivity and hospital capacity, widely available testing and effective contact tracing in the region.

Whenever restrictions ease or are completely lifted down the road, will either establishment consider keeping their new options available?

The carhop service at Crusin' might be tricky when dine-in operation returns. Lange noted that it could cause spacing issues in the parking lot when dine-in, takeout and carhop customers are at the restaurant at once.

"I shouldn't say no," he said. "I would probably think about keeping it on weekends during the day or until seven o'clock at night. It just can't interfere with normal business."

As for The Milk House, Carey also sees some challenges with the additions he made. However, he mentioned that the shop could make grab-and-go takeout and curbside pickup available during non-peak seasons.

"One of the biggest issues that we face is parking," Carey said. "Where we would certainly consider it in the winter, maybe in October through February."