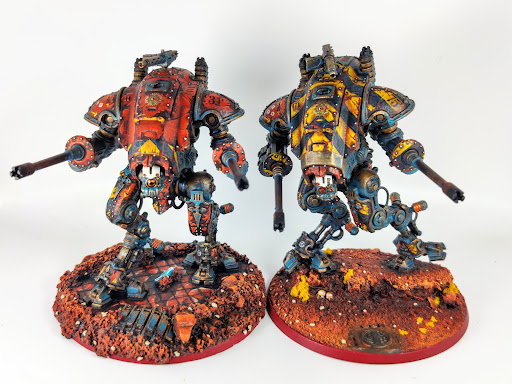 Afternoon #warmongers and #warhammercommunity it's the 'tenth' of #Dreadtober and it's the last of my #ImperialKnights Armiger Helverins. They're complete and here's the obligatory white background pictures. 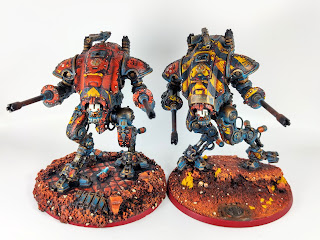 This project started off so well and participating in Dreadtober is the sole reason I would have completed them. As the month wore on I got more tired, the weather got worse, I was disappointed at the priming fail and I was less inclined to paint. 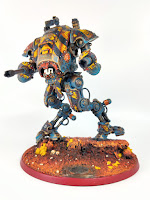 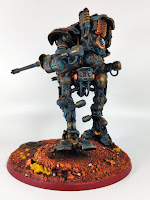 That said, they weren't too hard really. They feel deceptively complex but they're not. It definitely helps to  note done what elements need toe be done and tick them off as you go along. It helps predict how long it'll take and how much effort you have to put in. 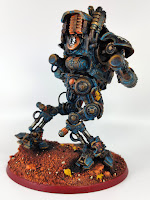 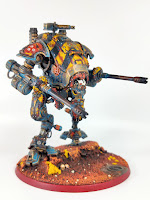 I do love the yellow chevron, I need to come up with names for all my Armigers and my Cerastus. This one may be Clatterbridge, I'll need to get a title for him. Do Armiger pilots get to be called 'Ser', I'll have to check the Codex. 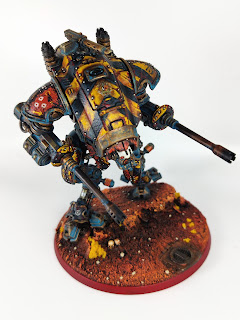 I needed to fill that space on the red shoulder with those decals, it was so empty otherwise. But now it looks so cluttered! Ha, ha, I don't mind it's nice to have some busy models. 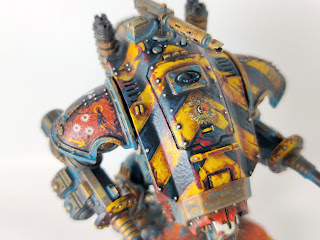 The number was a potential nightmare. When I had originally done the chevrons so they didn't match the carapace the number was going to go horizontal and would mostly fit in the yellow bit, I was going to outline the letters yellow where they strayed into the black. When I swapped the pattern I was worried it wouldn't work and it was only as I was adding it that I noticed it would fit diagonally inside the yellow stripe and it became my favourite bit on the model. In fact I now wish I could have had all the numbers angled like this. 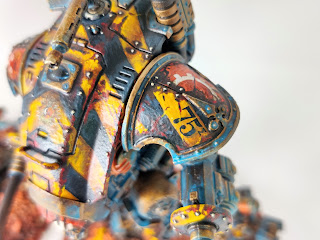 The stripe on the Autcannon shields aren't angled the same but luckily when they're posed you don't notice. The Blessed verdigris on the carapace 'collar' is a bit ropey too. 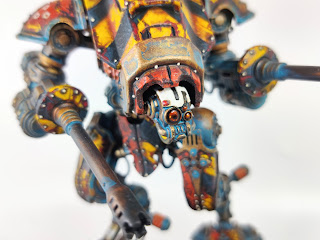 I just love it so much. Sure it doesn't quite fit with the other three, but it definitely helps make it a standout model - a leader among the Armiger's which is what I was aiming for. 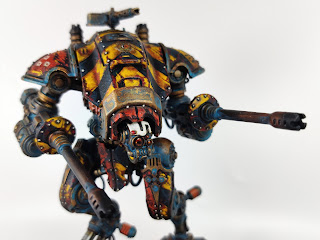 I had to make that left shoulder red as I'd already taken so much red off the model to make yellow and black. It's rather odd to see the white cog symbol on it, I'd have preferred a black; which is odd because when I did the Warglaives I was more keen to have white decals on the red and was disappointed when there were only black. 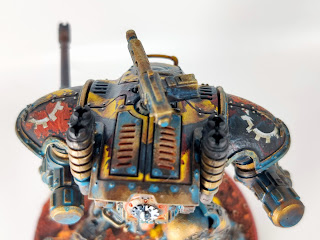 I did a slightly more simplified orange glow effect this time round. Usually I add some yellow into the mix but this time it's just a couple of oranges and white. It's actually more vibrant than the Warglaives so I may stick with that in the future. 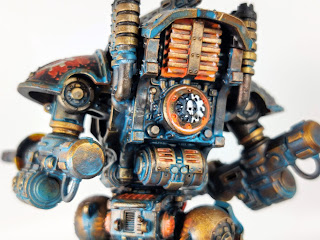 I think this base could have done with a bit more debris - green panels and grey 'rebar' mesh like the Warglaives, that would have helped tie it in with them more. The shading at the base of the cliff was originally much darker but Vallejo Rust Model wash helped blend it more so its aligned better with the other bases. 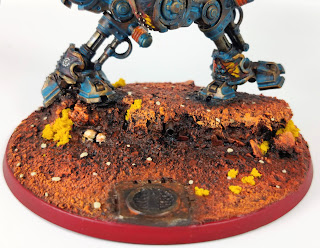 Again, I love this resign base and raises the model up another centimetre. 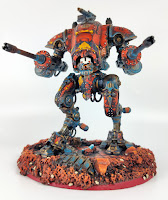 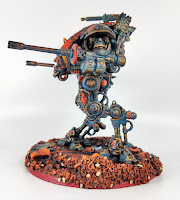 The Blessed Verdigris on the debris worked really well and matches my Sanctum Imperialis. But that scale on the gravel is just too much. I should have added some of my own sand in places to level things out a bit. 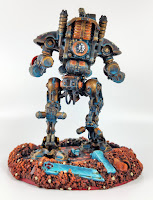 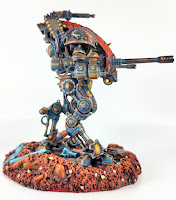 I went with the yellow grab handles this time as I liked them on my Questoris knights. Also, my initial concerns about the chevrons on the carapace collar were perhaps unfounded as otherwise there would have been very limited yellow and black on this. 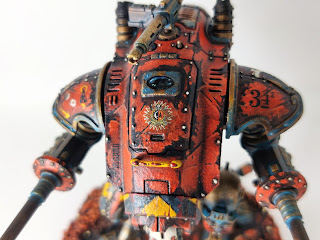 Of course that's a direct counterpoint to Ser Clatterbridge who is full of it, but even so it did need something to break up the red, black and white. 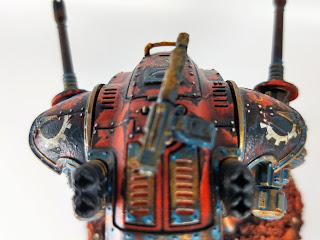 Nice Blessed Verdigris tide mark there on the left autocannon, but we can't win them all. 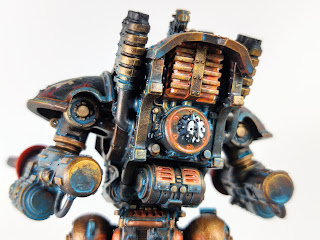 I also added chevrons on the groin plate, Ser Clatterbridge has these mirrored. 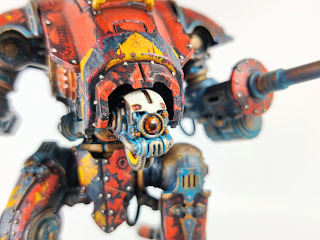 I split a black cog decal for the other side of the plate and also added a mechanicum cog above it, as if it was connected. Random yellow arrow decal on the thigh plate too, just to break things up [as if the battle damage wasn't doing that]. It was surprisingly difficult to get that particular decal to stick in that spot. 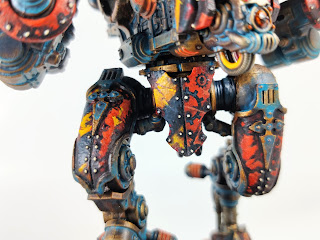 And the tiled base. What do you think? I think it's redeemed itself in the end. But I actually think that's because the Army Painter Anti-shine has come out with a satin finish rather than the proper matt it can do. I really shook the bottle and did a second coat on it but it was still satin. 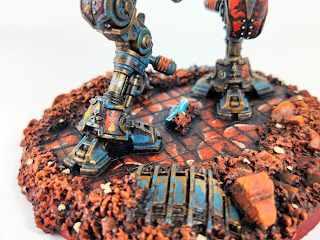 Close up of the Blessed Verdigris. 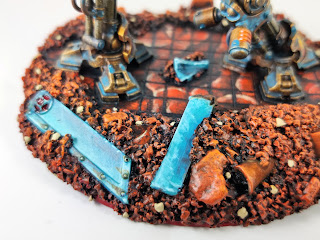 Here we have a comparison with one of the Warglaives and I'm overjoyed at how they're both consistent and yet very different.

I think the red and the battle damage in particular match up very well and it's great I was able to pull that off despite such a long gap between painting these. 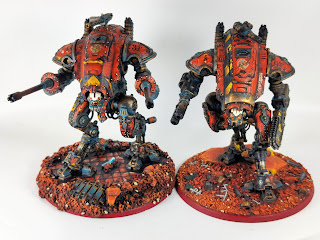 I really, really love Armigers. I would love and army of them led by my Preceptor but it's entirely daft and I won't do it. But, I do have a couple of Sentinels for my Genestealer Cult that may fill that itch although I see I never even included them in my TO DO LIST! Anyway, what next? I may have a bit of a break but I still have the Ravenwing Talonmaster and Attack Bikes. I also want to paint the yellow munitorum container using the gamboge effect I started on Ser Clatterbridge. I think that will be surprisingly swift to do - a week or so. And finish some of my Blood Bowl halflings. I just need to have a break and come back refreshed.
Source: 40kaddict