So, it looks like I am doing Aeronautica Imperialis with some degree of seriousness. Fortunately, they are proving to be super quick to paint and after building one of each box set (both Ork and Imperial Navy) over the weekend, I managed to paint all of these in one evening: 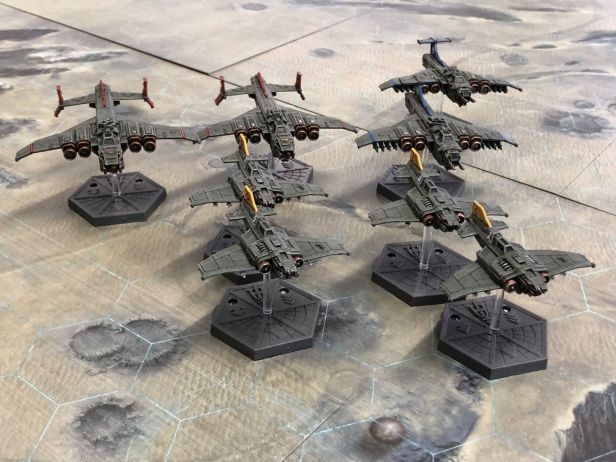 With the two Thunderbolts and two Marauder Bombers in the box set added to these, my Imperial Navy force is now looking very convincing (and is pretty much all I need to play through the planned Rynn’s World campaign, albeit with the addition of a couple more Marauder Bombers and a handful of aces).

I do have some issues with the Thunderbolt transfer sheet, I have to say. First off, they supply transfers of the Aquila to be placed on the wings to mark aces. Nice idea, and they even provide them in black and white, but note that piping on the left wing…

The transfers will not fit on the wing, not with any degree of ease that I was willing to countenance.

Second, the starter box set provided a range of tail transfers to mark squadrons, enough for all aircraft. All well and good, and they are repeated in the Thunderbolt box set – but the one I chose in the starter set is only repeated for two aircraft, meaning two Thunderbolts are, at the moment, tail transfer free.

At least I got to add a couple of Furies to the force but that transfer thing is an issue.

Two more Marauders got added and, like those from the starter set, I loaded them for bear, cramming their wings with missiles and bombs. When it comes to strategic targets, these guys are not messing around.

And a new aircraft type got added – the Marauder Destroyer. I was going to lump these in with the Marauder Bomber squadron, but then I figured that would not make a great deal of sense given their differing roles. I also think the red sets them apart nicely.

I really like the look of this model, as it is more than just a revised Marauder Bomber. The new nose gives it a different profile up front but what may not be immediately apparent is that the new tail actually extends the length of the aircraft quite a bit over the Marauder Bomber.

I kind of get a ‘Wimpey’ feel from the Marauder Bomber, whereas the Destroyer is full on Lancaster, and that comes from more than just the twin tail.

And that, in one evening, is the bulk of my Imperial Navy done for this game, until they add some new models and I get those aces done. Next up… Orks!