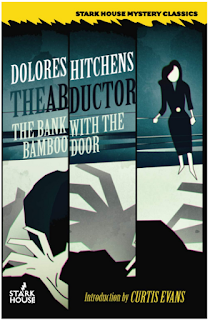 IN BRIEF: The Bank with the Bamboo Door – Dolores Hitchens

In the introduction to Dolores Hitchens’ The Bank with the Bamboo Door (1965), another knockout reprint from Stark House Press, Curt Evans quotes Anthony Boucher’s book review. Boucher wrote of Hitchens’ seedy exploration of small town California: “It’s a little as if a Lionel White Big-Caper plot had wandered into the midst of Peyton Place.” And a better precis could not have been done in less than twenty words. Those aching for that Big Caper plot will be sorely disappointed, it never gets past the initial planning stages. A past crime plays a bigger part in the story floating over the action like a funereal shroud and taking shape as a ghost of sorts to haunt many of the characters in Hitchens’ novel. There was an attempt at a caper long ago. A bank heist went spectacularly wrong ending in murder of several bank employees and the arrest of nearly all the thieves. Legend has it that $65,000 of the bank’s money went missing and may still be somewhere in the maze of underground tunnels, remnants of an old Chinatown in which the shopkeepers had connected all the buildings with a network of passages in the cellars and basement. But there is plenty of crime, planned or pending or commissioned. And, of course, a murder. 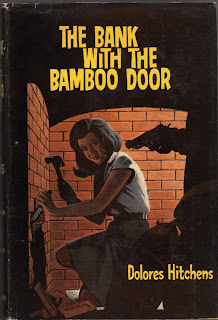 For much of the book it was hard to shake the Peyton Place mood. Perhaps Edge of Night is the more apt analogy if soap operas must be mentioned. For this is a town mostly plagued by criminal impulses and a bank robbery no one can forget. In the episodic narrative we learn a lot about a large assortment of people fairly quickly. Unhappy marriages, terminal illness, all manner of emotional problems --the stuff of soap opera melodrama -- are par for the course. While many of the local social club’s women dish the dirt about the “horrifying” possibility of a Jewish woman among their membership and a doctor’s wife mulls over an ambiguous medical diagnosis, crime festers beneath the town’s surface. A bitter doctor plots a permanent end to the blackmailer draining his finances, a woman ponders how and where to get an abortion without anyone finding out, a drug addicted nympho craves morphine while shiftily gathering the latest hush money payment from her victim, the co-owner of a pet shop cum garden supply store is drawn to the mysterious new customer interested in the basement of her store, and that mysterious man soon reveals he’s planning on searching for the missing bank money no matter what it takes.

Chance plays a cruel part in the outcome and the most tenuous of threads will result in deadly connections. Despite the tendency to lean heavily towards episodic melodrama, Hitchens does an admirable job of interweaving the various storylines with some startling intersections of lives and unexpected crossed paths. The finale is as noirish as her fine private eye novel Sleep with Slander and some of her other equally nightmarish suspense novels.

As is their usual practice Stark House Press has paired The Bank with the Bamboo Door  with another Dolores Hitchens suspense novel, The Abductor.  The two-in-one trade paperback was released in March 2021 and is now available from the usual online bookselling sites.

IN BRIEF: The Bank with the Bamboo Door – Dolores Hitchens